The university says there will be no cancellation of classes and the potential for traffic in an email to students and faculty. 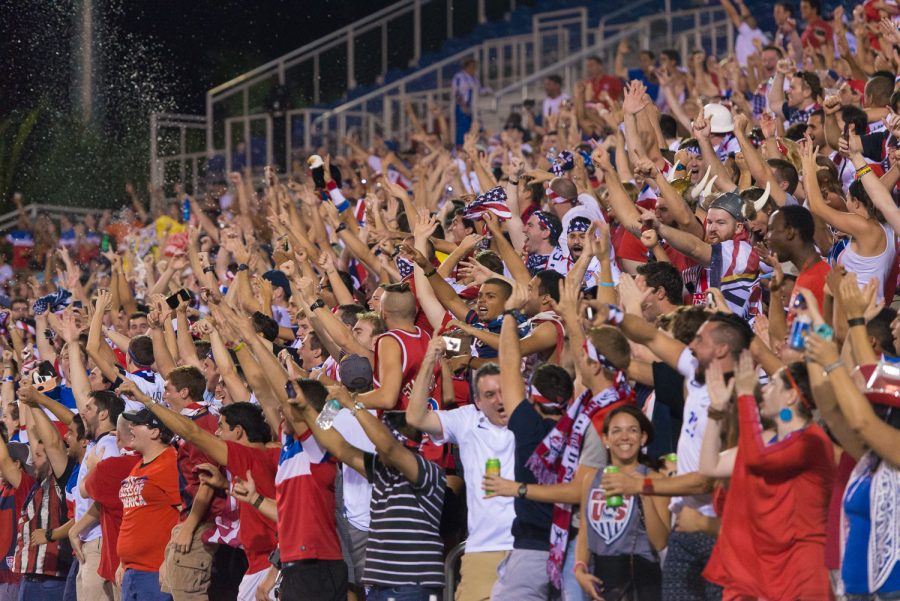 Fans of the United States Men’s National Team cheer on the team versus Honduras at FAU Stadium on Oct. 15, 2015. Argentina’s pair of Olympic warm­up matches will be the first time since that game a men’s national team has played in Boca Raton. Max Jackson | staff photographer.

ith the start of the 2016 Summer Olympics in Rio de Janeiro approaching on Aug. 5, the national soccer teams of Argentina, Colombia and Haiti will make the trip to Boca Raton to play a pair of friendly matches before they leave for Brazil.

Students hoping to have class canceled by the game won’t get their wish; an email sent on July 11 to students and faculty stated that classes will remain unaffected when Argentina plays Colombia on Thursday, July 21.

In the email, the university stated: “As a precaution to help alleviate anticipated traffic congestion, the Boca Raton campus will cease operations at 4 p.m. for all staff and personnel not involved in classes.”

In the past, events that have conflicted with courses’ start and end times have led to class cancellations. Before FAU football’s Sept. 11 game versus the University of Miami Hurricanes, classes and meetings scheduled after 1 p.m. were canceled in anticipation of large crowds tailgating on campus before the game.

Currently, the rec center and library do not mention closing on the dates of either game on their respective websites. However, The Atlantic Dining Hall’s site mentions that the cafeteria will not be open for dinner service on either day.

The email also said that people who park in parking lots four and seven, which are located near Engineering East and the College of Business building respectively, should look for alternate lots to avoid traffic from the game.

Argentina’s team is currently at the top of FIFA’s ranking of international teams, while Colombia is ranked third and Haiti is ranked 74th.

“We actively work with U.S. Soccer and international soccer federations,” FAU athletic director Pat Chun said in an email. “I’m of the belief that we have built a great reputation in the soccer community in terms of hosting world class soccer events, U.S. Soccer, and the College Cup.”

According to ticketmaster’s FAU Stadium page, tickets for both games are selling for anywhere from $30 to $100.

FAU Stadium’s last international soccer match was on March 9, when it hosted two games of the SheBelieves Cup, which featured the women’s national soccer teams of the United States, Germany, England and France.

The U.S. goalkeeper Hope Solo made an Instagram post before playing in her team’s game versus Germany, commenting that the condition of the field was poor after being used.

“They are good,” Chun said in an email of the field’s current conditions. “We are in summertime so the grass grows at a higher rate and it will be in optimal condition.”

Argentina’s national team will play in both games, facing Colombia on July 21 at 7 p.m. and Haiti on July 24 at 5 p.m. All three teams have never played at FAU Stadium before.