The Owls are the second seed out of four teams in the Coral Gables regional. 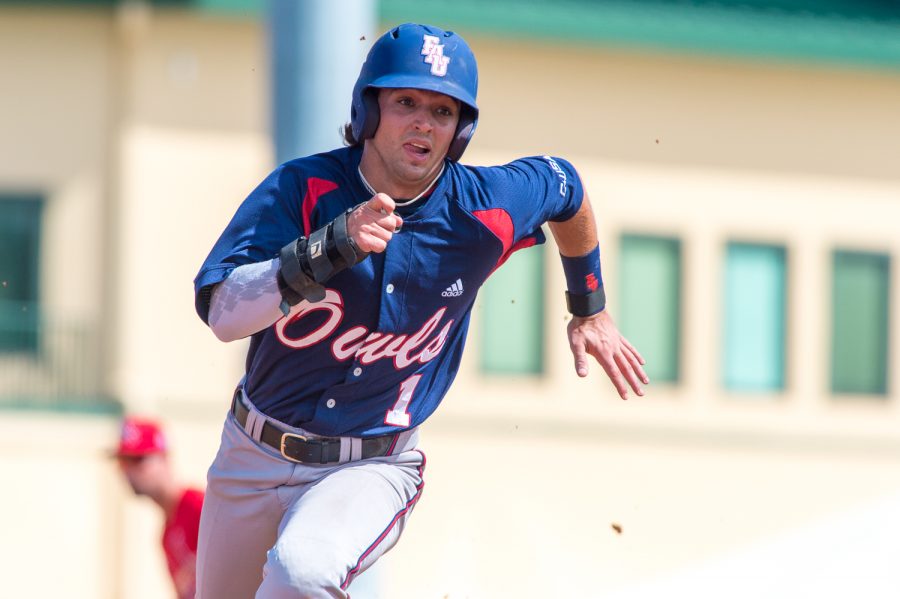 Senior Stephen Kerr went 2-for-4 in the Owls loss to FGCU on Tuesday night. Photo by Max Jackson

fter earning the first Conference USA regular season title in program history before falling short in the postseason conference tournament, Florida Atlantic baseball will return to the diamond on Friday, June 1 to compete in its 12th NCAA Regional Tournament in program history.

FAU (38-17) enters this year’s tournament as the second seed in the Coral Gables regional, which features Stetson University (29-29), Long Beach State University (36-20) and host-team the University of Miami (45-11) in the first round of competition.

The only team the Owls have previously faced in the four-team field this season has been the Hurricanes.

Stetson has won 35 of its 60 career matchups with FAU, including the last meeting between the two teams in 2006.

Long Beach State has never faced off with the Owls, but the university will be their first opponent on Friday at 1 p.m. The game will be aired on ESPN3.

Player to Watch From Each Team

FAU – Junior Shortstop CJ Chatham: Chatham has been the Owls’ leader since before he was named to Louisville Slugger’s Preseason All-American Team. The junior shortstop led FAU in batting average (.367), slugging percentage (.574), triples (4) and runs scored (48), earning Conference USA’s Player of the Year honors as well as the conference’s defensive player of the year award. He is listed as the 79th overall prospect in the upcoming MLB Draft.

Long Beach State – Sophomore Pitcher Darren McCaughan: McCaughan boasts the 24th lowest ERA in the nation with a mark of 1.98. His WHIP — walks plus hits allowed per inning — of .82 is tied for the fourth lowest total in the NCAA. He leads Long Beach State’s pitching staff in wins with a 10-1 record.

Miami – Junior Catcher Zack Collins: Collins, a preseason first-team All American and a 2016 All-Atlantic Coast Conference member, led his team in home runs (12), RBIs (52) and finished second in batting average (.364) and runs scored (45). He is listed as the best catcher and the 20th overall prospect in the upcoming MLB Draft.

Stetson – Sophomore Pitcher Brooks Wilson: Wilson has been the most efficient starting pitcher for the Hatters, as he is the only one who has started more than five games and holds an ERA under 4.00. Wilson shut out The Citadel  — also known as The Military College of South Carolina — in an 11-strikeout, complete-game performance in April that was the only shutout Stetson has thrown so far all season.

How the Tournament Works

The NCAA baseball postseason features a field of 64 teams — 32 conference champions and 32 at-large bids — competing in a tournament structured into three separate rounds.

The first round, also known as regionals, sees the field divide into 16 groups of four. Each regional is a double-elimination style tournament between four teams — usually played at the home field of the top seed in each region — until one team is left standing from each set.

In the following round, known as super regionals, the remaining 16 teams engage in a best-of-three series against one other opponent of the stage.

After the dust settles in round two, the remaining eight teams engage in the final round — the College World Series.

This round is very similar to the regionals as it uses another four-team bracket engaging in a double-elimination style playoff. Then the best team from each of the groups of four face off in a best-of-three series for the national championship.

Christopher Libreros is a contributing writer with the University Press. For information regarding this or other stories, email [email protected] or tweet him at @ChrisIsAirborne.