Three new members for the Board of Trustees

Come its next meeting in June, the board will see a new student representative and two of the state governor's picks. 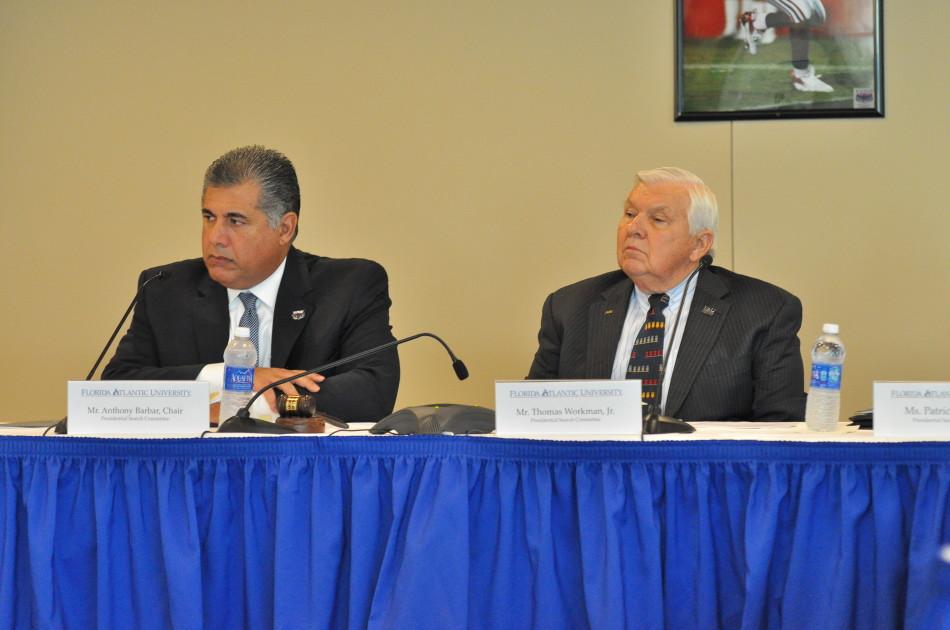 FAU Board of Trustees Chairman Anthony Barbar and Chairman of the Audit and Finance Committee Thomas Workman. Photo by Michelle Friswell

local surgeon, a CEO and Florida Atlantic’s new student body president were added to the university’s Board of Trustees — a group of elected members that vote and carry out the college’s objectives — on May 17.

Heart surgeon Malcolm J. Dorman will hold a new seat on the board and CEO Abdol Moabery has been reappointed, both picked by Gov. Rick Scott. Student body president, Michael Cairo, was also added.

According to its website, thirteen members make up the board, which is responsible for approving university wide budgets, installing new academic programs and ensuring the university is following state laws.

All of the members are leaders in their fields of work, which mostly include financial and science companies, except for the student body president, who acts as a student representative.

Cairo told the UP his goal is to help the school achieve high marks.

“However I can help and improve the Board of Governors’ metrics … and help serve students,” he said. The performance metrics determine how much state funding each public university in Florida receives.

In March, FAU tied with the University of Central Florida for the fastest improving university in the state. This placement will provide FAU with more state funding next year.

The other two new members were appointed by Gov. Scott, who hand picks six of the board’s seats. The remaining slots include the president of the University Faculty Senate and five members who are picked by the Board of Governors.

Dr. Dorman, a heart surgeon and member of the Charles E. Schmidt College of Medicine advisory board, will replace Julius Teske, who has served on the board since 2011, according to a press release.

Scott reappointed Moabery, who has also been on the board since 2011. He is the president and CEO of GA Telesis LLC, a commercial aerospace company.

“Over the past 25 years, I have watched this amazing institution grow at an exciting pace,” Moabery said in a press release. “I look forward to continuing to serve the FAU community.”

Cairo is looking to work with the board to allow students to test out of more classes in the hopes that it will help increase graduation rates and bring more money to the university.

The next Board of Trustees meeting is scheduled for June 7.

Gregory Cox is the managing editor of the University Press. For information regarding this or other stories, email [email protected] or tweet him @gregcox92.