The team becomes the first FAU program to win a Conference USA title. 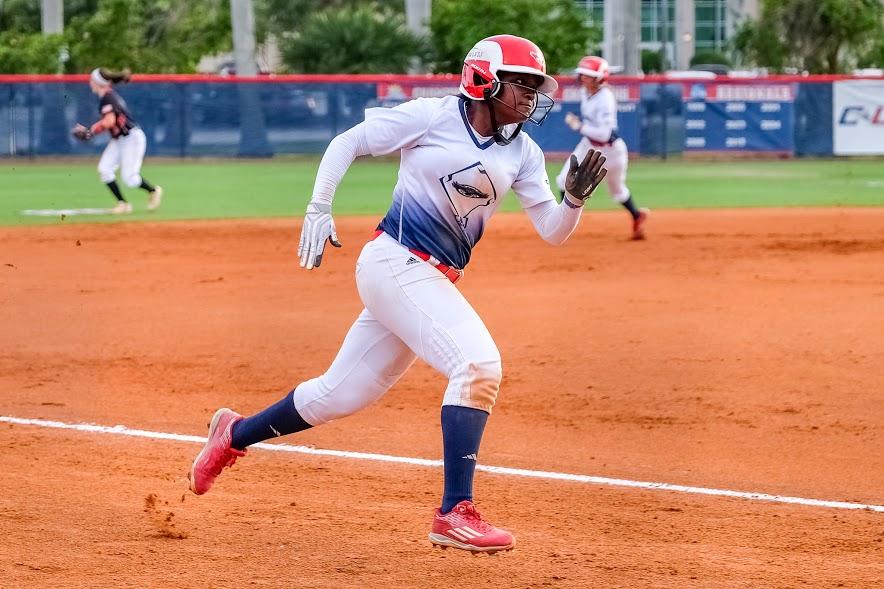 It marks the first time an FAU team, in any sport, has won a Conference USA championship of any kind — FAU was a member of the Sun Belt Conference until 2013.

“This is a feeling where words honestly can’t describe it, just have to feel it,” said senior second baseman Melissa Martinez, noting that she couldn’t imagine a better senior day. “To put it in words, it is absolutely amazing. One of the best feelings you can ask for honestly.”

She recorded seven hits in 10 at-bats over the weekend, along with 10 RBIs and two runs scored. Six of those hits and eight RBIs came in Saturday’s doubleheader.

Martinez, along with her twin sister Christina, and fellow seniors Carnesha Thompson, Kiley Southall and Mickey Bell have seen the team progress in each of their four years at FAU, improving from a 28-29 record in 2013, to 33-22 in 2014, to 39-19-1 last season and to a record of 44-7 so far this year.

“My five kids that are seniors are unbelievable,” head coach Joan Joyce said. “They are leaders. They probably have as much to do with shaping this team than anybody.”

“It’s a huge load off of our shoulders to know that first of all we’re there and second of all we’re going to be the No. 1 seed,” she continued. “The team is playing so good and our pitching staff is doing great. What more could a coach ask for?”

The Owls outscored WKU 30-4 in the three games.

Junior pitcher Kylee Hanson picked up her 23rd and 24th wins of the season, starting the first and last game of the series. She allowed one run on three hits and struck out 18 batters in the two games combined.

Thompson hit 6-for-11 with six runs and five RBIs over the weekend.

The Owls will visit the University of Texas at San Antonio next weekend for their final series of the season.

Here’s a recap of each game:
Game One: WKU 1, FAU 16 (5)
After Hanson allowed a run in the top of the first inning, the Owls answered back when Melissa Martinez hit a three-run double in the bottom half of the inning. FAU scored six runs in the inning.

The Owls went on to score three runs in the third inning and five in the fourth.

Christina Martinez and junior right fielder Delaney Rickey each hit 2-for-3, scored three runs and knocked in one.

Freshman pitcher Mia Olson finished the game on the mound in the fifth inning.
Game Two: WKU 3, FAU 8
The Owls offense continued rolling in the second game of the doubleheader. They scored two runs in the first inning and then one run in each of the second, third and fourth innings.

Junior pitcher Amanda WIlson shutout WKU throughout the first four innings, but ran into little trouble in the fifth inning when she gave up three runs.

“They are relentless,” Joyce said of her players. “We’re up 5-0, they score three and what do we do? We come right back in the bottom of that inning and we score three right on top of them. And that’s the way they been the entire year.”

Wilson remained in the game and caught a line-drive hit directly back at her for the last out, to clinch the regular season championship.

“It was honestly electrifying,” Melissa Martinez said. “When Amanda caught that line drive, our dugout just leaped. We’ve been doing jumps in the weight room all the time; I’m pretty sure if coach measured the height of everyone’s jump on that ball, we all would’ve [broken a personal record].
Game Three: WKU 0, FAU 6
Hanson retook the mound in the final game of the series and never gave WKU’s bats a chance, striking out 12 batters and only allowing one hit.

Sophomore first baseman Tatum Buckley scored the first run of the game in the bottom of the second inning when sophomore catcher Alex Miller singled up the middle.

In the third inning, Melissa Martinez hit another two-run double to stretch FAU’s lead to three.

Thompson scored a run in the fifth inning on a throwing error after stealing third base. She then roped a two-run double in the following inning to put up the Owls fifth and sixth runs of the game.

“We’re thinking step by step,” Melissa Martinez said. “We won this but we got to keep working, that’s what they really focus on telling us. We can celebrate, but we got work to do coming up.”