No players were selected in the NFL Draft for the first time since 2013. 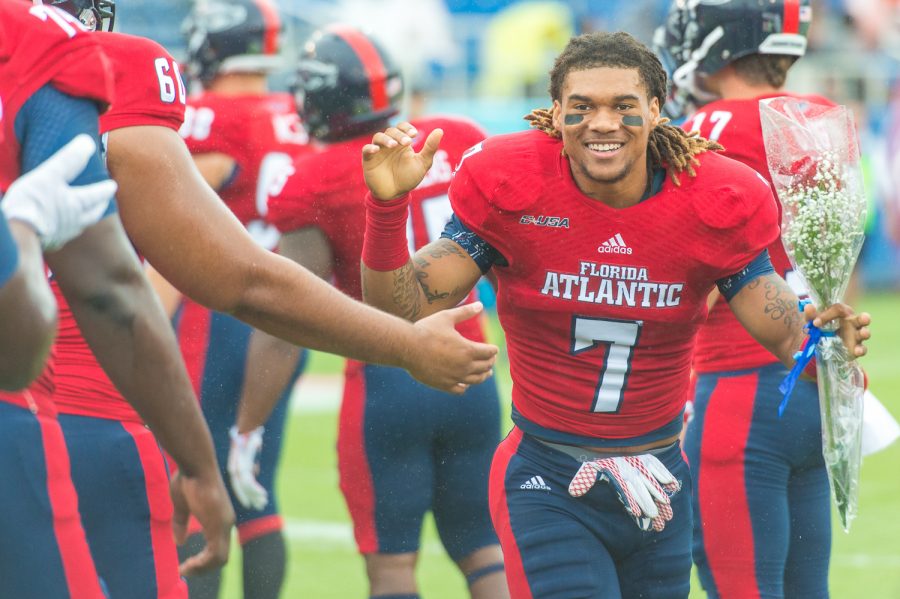 Defensive back Cre'von LeBlanc was one of five FAU players signed to an NFL contract over the weekend. Max Jackson | Staff Photographer

s the last pick in the 2016 NFL Draft was announced on Saturday night, none of the Florida Atlantic players heard their names called, but soon after five players received the phone call they were waiting for.

Defensive lineman Brandin Bryant signed with the Seattle Seahawks, cornerback Cre’von LeBlanc is heading to the New England Patriots, wide receiver Jenson Stoshak was picked up by the Carolina Panthers, defensive tackle Trevon Coley is heading to the Baltimore Ravens and defensive back Sharrod Neasman found a home with the Atlanta Falcons.

Bryant finished his four year career at FAU with 130 tackles — including 57 solo — and 27 tackles for loss of yardage.

After a knee injury limited him to five games in the 2014 season, he returned for the 2015 season and recorded five sacks, which ranked second in the team, and 10.5 tackles for lost, earning him FAU’s 2015 Comeback Player of the Year Award.

LeBlanc careered a total of 140 total tackles and 23 passes defended at FAU, including six interceptions returned for a total of 103 yards.

The Belle Glade, Florida native also played a major role for the Owls in special teams, often being the kick returner. He returned 17 kicks during the 2015 season for a total of 387 yards, another potential weapon that Leblanc brings to the table for the Patriots.

He racked up 1,885 receiving yards during his time at FAU.

Coley totalled 66 tackles and 12.5 sacks during his time with the Owls.

He also racked up 21 tackles for lost — 8.5 of which came his senior year — as well as one career interception which he picked off in the 2014 season.

Neasman ended his collegiate career at FAU with 138 total tackles —  68 of those solo — and five interceptions returned for 75 total yards.

The Florida native recorded a career high 14 tackles in a 31-28 loss versus the University of Alabama at Birmingham Blazers in 2014, two of which were for a loss of yardage.

Hans Belot Jr. is a contributing writer with the University Press. For information regarding this or other stories, email [email protected] or tweet him at @Don_Phenom_.