Threat of protests results in increased security for the event, though there were few interruptions. 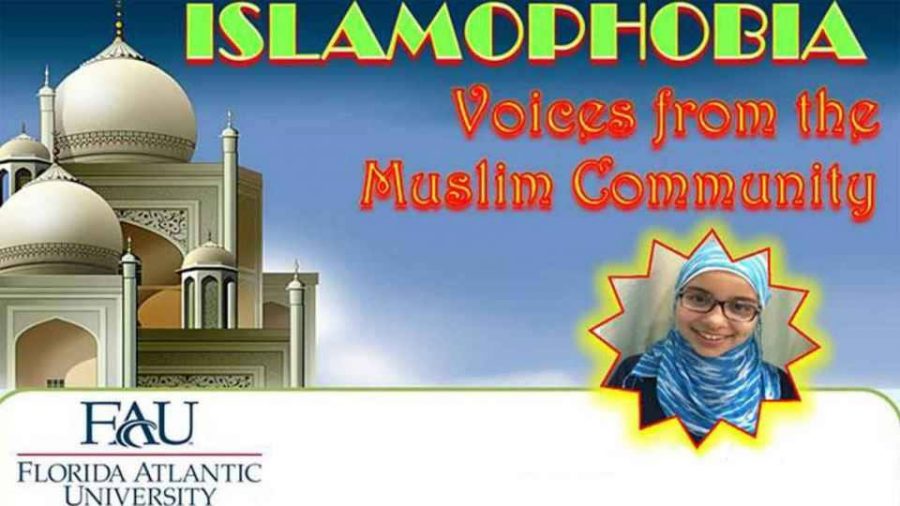 fter receiving online protest threats from anti-Islam group The United West, Florida Atlantic’s Muslim Student Association’s panel discussion on Islamophobia on Monday had a heightened security presence. With the added precautions, the event saw only a few interruptions from the audience in the Grand Palm room.

Titled “Islamophobia: Voices from the Muslim Community,” the discussion featured local Muslims addressing questions about the perceived connections between terror and Islam as well as life within their faith.

Along with several officers present, the MSA had attendees submit questions via social media to prevent outbursts from the crowd.

As Rabbi Barry Silver gave an opening statement highlighting the importance of Jewish people and Muslims sticking together in the Middle East, one older man yelled, “What a schmuck,” before being escorted out.

Silver ended his statement by encouraging the panelists to “become what Jews and Muslims were supposed to be from the beginning: a source of peace.”

During a second incident, panelist and FAU professor Bassem Alhalabi’s description of dismemberment law practices in some Muslim countries elicited mixed reactions from the crowd.

Aside from a few other minor interruptions, the panel was able to resume without further incident from the crowd.

Panelist Wilfredo Ruiz said, “Islam is described as being the religion of the middle path. By definition, it denies any of the extremes.”

Addressing the same topic, Alhalabi said, “Terrorism is not something that is taught. There are bad apples that use religion for their own purposes.”

The panel did not focus strictly on terrorism, however. The two women in the panel, Deema Gichi and Maha El Kolalli, were each asked what it was like to be a Muslim woman in the United States.

“I love being an Islamic-American woman,” said Kolalli. “I take a lot of pride in that position.”

Gichi and Kolalli discussed what wearing a hijab meant to them, as well as how it affected their day-to-day lives.

“A hijab represents inner beauty — what a woman gives to society is not sexualized, but is elevated,” Kolalli said. “Women give spirituality and intellect.”

Gichi added that her hijab “freed [her] from the unrealistic expectations this society has for how women should look.”

As the panel’s discussion moved into the main topic of the event, Islamophobia, the panelists began to get more passionate as they shared their insights.

Some of the panelists gave accounts of their experiences with discrimination. Kolalli chose instead to focus on the experiences of Islamic-American children.

“It is unfortunate that American children have to be afraid to be Muslim in the United States,” she said. “[These children] shouldn’t have to keep worrying after a car has stopped to let them cross the road. I should not have to tell my child to worry about a driver hitting the gas once they have stepped in front of the car, all because they are Muslim.”

In regards to terrorist groups like ISIS, Alhalabi said, “In any community the good people are the majority. But it is the select few, the bad people, who are very active and very vocal. To combat this, good people should do more good in order to overcome the bad.”

Ruiz focused on pursuing peace amidst the hate and bigotry that many Muslims — and past races and religions, according to the panelist — are exposed to in the United States.

Alhalabi called for unity despite the differences of race and religion throughout America, adding, “At the end of the day, we owe it to each other to support one another.”

Tucker Berardi is a staff writer for the University Press. For information regarding this or other stories, email [email protected] or tweet him @tucker_berardi.