The team now sits one game behind Rice and USM for the conference lead. 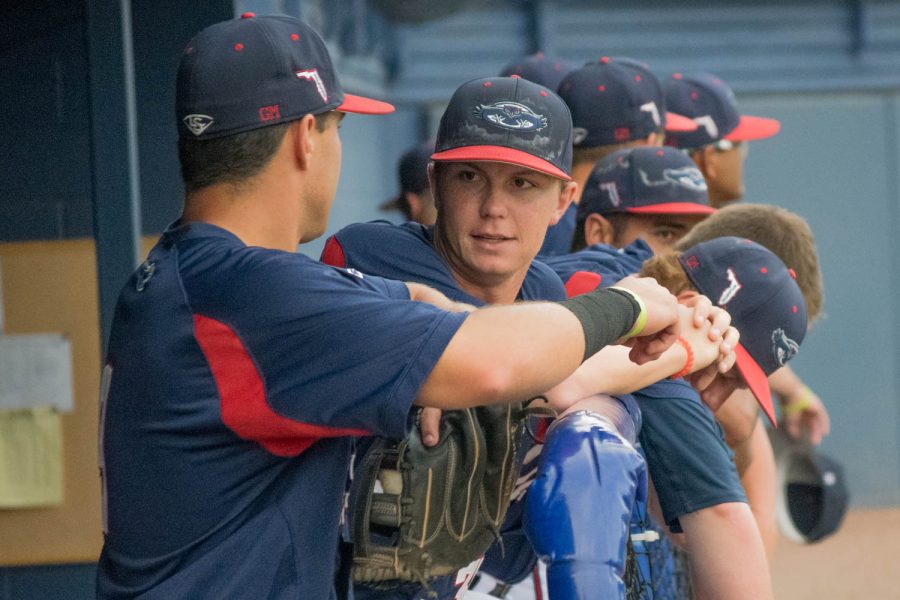 FAU players chat in the dugout during their game Saturday against the University of Southern Missouri. Ryan Lynch| Multimedia Editor

he Southern Mississippi Golden Eagles came to Boca Raton on Friday with a two-game lead over Florida Atlantic baseball and a were one-game lead over Rice University, for the top spot of the Conference USA standings.

The Owls (30-12, 14-7 C-USA) won the first two games of the series. Thanks to Charlotte who defeated Rice on Friday, FAU entered Sunday’s game in a three-way tie for the Conference USA lead.

“A lot of stuff is one the line in terms of conference standings, but I don’t worry about that stuff at this time of year,” head coach John McCormack said after Saturday’s game, after his team tied Rice and USM at the top of the standings. “We play 10 more conference games so a lot can happen, I’m just excited about the way we played.”

However, the team dropped Sunday’s finale by a score of 4-3, and now sits one game behind both Rice and USM (31-14, 15-6 C-USA). FAU does sport the best overall record in the conference.

“I thought that our guys played really well this weekend, they played hard, they got after it and 2-of-3 against Southern Miss is a good weekend,” McCormack said.

Hitter of the Weekend: CJ Chatham: The junior shortstop hit 9-for-14 with six RBIs and five runs scored. He collected five RBIs and scored three runs in Saturday’s game.

Pitcher of the Weekend: Nick Swan: The freshman pitcher relieved sophomore pitcher Marc Stewart in the fifth inning of Friday’s game with the Owls holding a 6-5 lead. Swan finished the game, shutting out the Golden Eagles and allowing just one hit.

“Goat” of the Weekend: Umpire John Lavin: An umpire never wants to be the center of attention, but Lavin made three controversial calls which forced McCormack out of the dugout and all went in favor of USM. One call occurred in Saturday’s game when Owls’ junior second baseman Stephen Kerr clearly beat the throw but was called out by Lavin, the then-first base umpire.

The other two calls were the difference in Sunday’s loss as Lavin, the home plate umpire, called senior right fielder out at home plate when he appeared to beat the tag and then said USM sophomore designated hitter Daniel Keating was hit by a pitch. McCormack argued that Keating never made an attempt to avoid the ball, which the batter must do by rule. He said that Lavin claimed the batter had “no shot” to get out of the way. Keating scored the Golden Eagles go-ahead run.

The Owls will visit the University of Miami on Wednesday, May 4. They previously defeated the Hurricanes in Miami on April 20.

Here’s a recap of each game:

Golden Eagles freshman left fielder Hunter Slater struck a three-run home run over the right field fence in the first inning of the series off of Stewart to capture a 3-0 lead.

Labsan homered in his first at-bat of the second inning to put the Owls on the scoreboard. In the following inning, junior second baseman Stephen Kerr tripled in senior right fielder Brett Lashley. Kerr then scored on an RBI groundout off the bat of Chatham to tie the score at three.

FAU’s offense kept rolling in the fourth inning. Redshirt junior Esteban Puerta and junior third baseman Austin Langham started the inning with a walk and a double respectively. Lashley followed an RBI sacrifice fly, from freshman catcher Tyler Frank, with an RBI double. He then scored on a Kerr single.

USM closed the deficit from three runs to one in the following inning behind senior center fielder Jake Sandlin, who knocked in and scored a run in the top of the fifth inning.

The Owls immediately answered with two runs of their own. Puerta, Labsan and Langham drew consecutive two-out walks to load the bases for Frank, who singled in the two runs.

Freshman pitcher Nick Swan, who relieved Stewart in the fifth inning, finished the game on the mound for FAU. He allowed one hit in his four and two-third shutout innings, picking up his second win of the season.

Kerr finished the game 3-for-4 with one walk, three RBIs and one run scored.

Chatham took control of the second game of the series. The shortstop recorded five hits in six at-bats. He also knocked in five runs and scored three of his own, including a three-run home run to put the game away in the seventh inning.

He also scored from third base on a wild pitch from an attempted intentional walk.

“Can’t say enough about CJ,” McCormack said “He’s a good player and he makes us go.”

Senior pitcher Brandon Rhodes picked up his team-leading sixth victory for Owls. He allowed three runs off of five hits. Freshman Alex House relieved Rhodes for the final seven outs of the game and allowed one run.

“Absolutely fantastic game,” McCormack said. “I’m so proud of the guys. From right in the beginning, great at-bats, team at-bats, clutch at-bats, and if something bad happened they just kept moving on.”

Labsan started the final game of the series for the Owls. He threw five shutout innings before being removed with a 1-0 lead, thanks to a Puerta single which followed a Chatham double.

In the fourth inning, Lashley appeared to slide home safely, but was called out by Lavin.

Lavin made himself the subject of attention again in the sixth inning when he claimed that Keating was hit by a pitch. McCormack argued that Keating never made an attempt to get out of the way of the pitch, which the batter must do, but Lavin stuck with his call and Keating eventually scored the Golden Eagles go-ahead run.

Trailing 4-1 in the bottom of the ninth, the Owls loaded the bases for Dicks with two outs. Dicks singled in two runners and moved the tying run to third base for Langham, who came up about five-feet short of a walk-off home run when he flew out to left field to end the game.

“We gave ourselves a chance,” McCormack said. “Early in the game I thought we had some opportunities and could have certainly used a hit … but credit to [USM].”

Puerta finished 4-for-5 with an RBI.