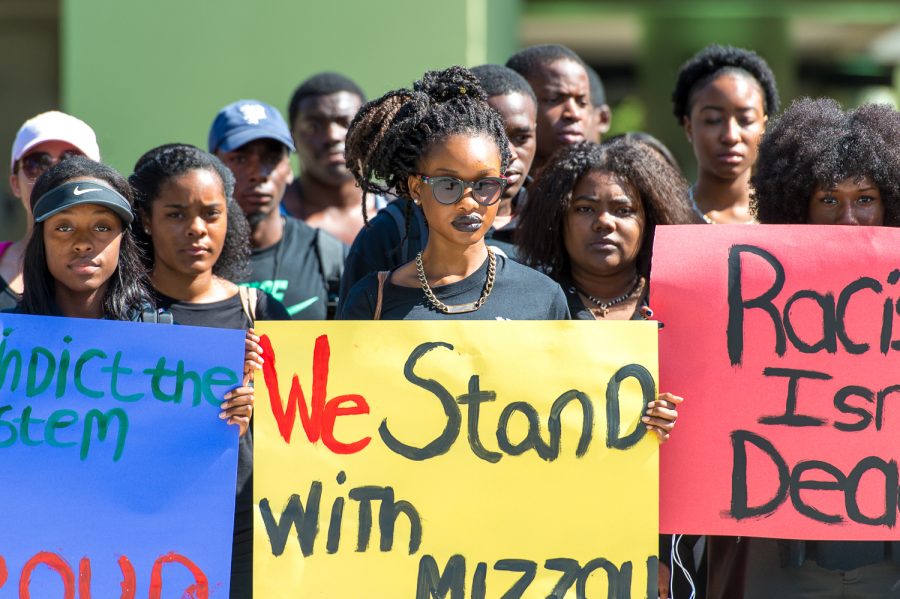 Berlinie St. Fort, junior communications major (center) shows her support for students at the University of Missouri during a protest in November 2015. Some other signs said “Racism isn’t dead,” and “#indictthesystem Black and Proud.”. Max Jackson | Staff Photographer

wo weeks ago, the Student Government Boca Raton House of Representatives passed a resolution that allows for the entire Boca Campus to become a free speech zone.

When he proposed the resolution to the House, former SG vice president and current Career  Development Center employee Thomas De Maio made note about how college is a time for students to hear different opinions and that they shouldn’t have to fear repercussions for voicing them.

“I want students to feel comfortable expressing themselves throughout all college campuses. College is a time of self-exploration,” he said. “College is the time and place for students to challenge their core beliefs and begin to form opinions for themselves.”

De Maio said that the current law restricting protesting only to the free speech zone between the west of the Social Science building and the Breezeway make no sense.

“Students should not have their freedom of speech limited to a designated patch of grass on their campus,” he said.

Ian Dunne, a graduate student studying political science, was one of people opposed to the resolution. He said that the resolution’s wording makes a commitment that SG might not be able to uphold.

“The wording for the bill makes a lot of promises that we can’t keep. As a public university, we are liable for anything wrong happening during these protest.” the graduate student said

Dunne cited the FAU Handbook for Free Speech which states that a person is protected by the First Amendment of the U.S. Constitution and Florida Constitution to freely assemble and protest. However, that said person is responsible for any abuse of that right or repercussions.

Dunne said that safety was a major concern of the resolution because people can protest at the Baldwin House, near the stadium or any other area on campus. One example Dunne uses is the abortion rights group that frequents the campus.

“Right now, that group would only have one area to protest, the free speech zone located on campus. With this resolution, you open up the whole campus to the abortion rights group to protest near the stadium, near the Student Union, by the library. It would come off as untactful,” he said.

Check back with upressonline.com for updates on the bill’s progress.