During Sexual Assault Awareness Month, we look at the facts. 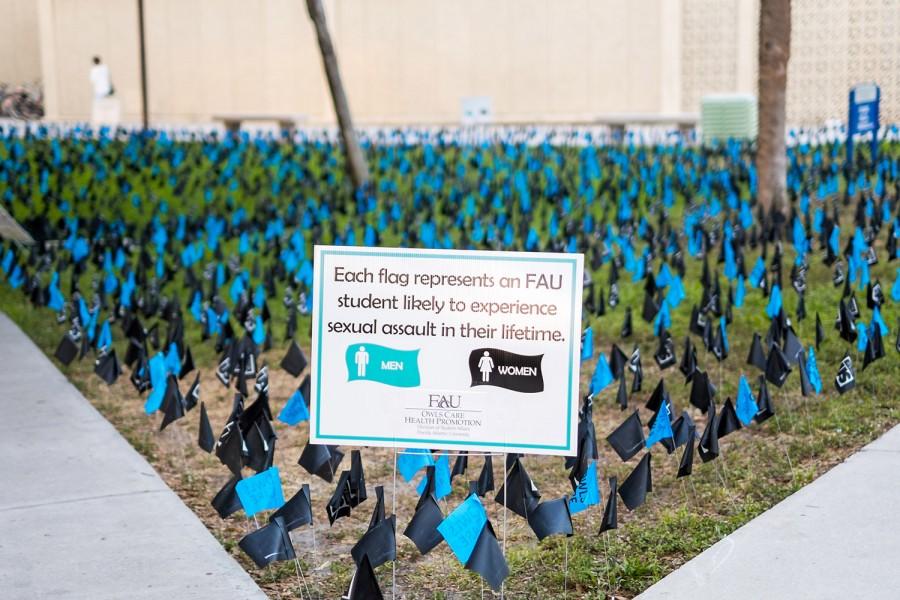 During the month of April, Owls Care Health promotion placed flags outside of the Breezeway with statistics about sexual assault. Mohammed F Emran | Staff Photographer

n a Friday night in September of 2014, a Florida Atlantic student went on her third date with a man she met on the dating app, OkCupid. The man picked her up from her University Village Apartments dorm.

They had dinner and drinks at Duffy’s Sports Grill, about 8 miles away from the Boca Raton campus, then headed back to the student’s dorm around 10:45 p.m.

That was the start of what would become one of FAU’s six recorded sexual assaults that year.

Every year, the FAU Police has to, by law, submit a report on the crimes that occurred on campus. The report is known as the Jeanne Clery Disclosure of Campus Security Policy and Campus Crime Statistics Act — or Clery Act for short.

The report was released in September and revealed that the amount of “forcible sexual offenses” reported on the Boca campus rose from two to six between 2013 and 2014. This means the number of campus rapes tripled — albeit only by four people, but four people too many.

When asked to comment on the tripling of on-campus sexual assaults in her tenure as Student Government  president — after several messages between her and the University Press, which included her asking Student Affairs and Media Relations administrators how to respond — Kathryn Edmunds refused to comment.

Of the six rapes committed on the Boca campus, two resulted in police reports. The National Sexual Violence Resource Center says this is normal, reporting that less than 5 percent of college students who are sexually assaulted actually report the crime.

In addition, the six sexual offenses reported in 2014 happened in the residence halls on campus, unlike in 2012 and 2013, which both included at least one rape off campus.

According to the police report, the student and her date were kissing in her bed, but she told him she did not want to have sex.

He said OK. Later, he pushed the student’s legs over her shoulders. “The victim said she had yoga pants on so he lifted up her pants and started touching ‘down there,’” stated the police report, which was filed two days after the incident.

“The victim said she was fine with that, but then he put the condom on and the victim stated, ‘we not having sex!’ The suspect responded saying ‘no, it’s OK’ and [the victim] told him ‘no, no, no, I am serious.’”

That’s when the man pushed the student’s legs up, overpowering her. Only after fully inserting himself was the victim able to later push the suspect off her “aggressively,” according to the report. “The victim said that inside she was crying, but outside she was just sitting there scared.”

Six hundred seventy-three thousand women currently attending U.S. colleges and universities have experienced rape at some point in their lifetime, according to the nonprofit One in Four.

“I think it is important to note that those are reported sexual assaults incidents so there are more that go unreported but still occur,” said Allison Vo, the week’s coordinator and the school’s peer education team director.

“That being said, I think the increase in cases that are reported to campus authorities speaks to the changing culture around sexual assault at FAU. We want to ensure that their victims feel supported and safe during their experience here, so we need those cases to be reported so the university can help that student.”

Emily Bloch is the editor in chief of the University Press. For information regarding this or other stories, email [email protected] or tweet her @emdrums.