Twin seniors Christina and Melissa Martinez are playing in their final season of their collegiate career. 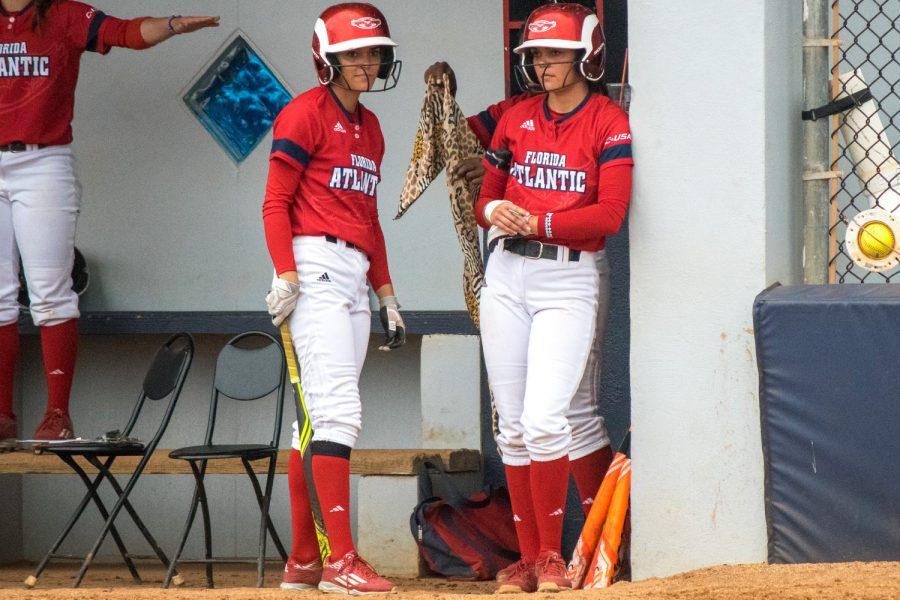 Christina (left) and Melissa Martinez wait in the dugout for their respective turns at bat. Ryan Lynch | Multimedia Editor

n a scorching hot Saturday afternoon in April at Florida Atlantic Softball Stadium, senior second baseman Melissa Martinez stepped up to the plate with the bases loaded while her older twin sister, senior center fielder Christina Martinez, watched on from third base.

As the pitch sped toward the catcher’s mitt, the second baseman laced a line drive over the opposing shortstop’s head into left field that scored two runners for the FAU softball team, including her twin.

Natives of Miami, Florida, the two sisters — who were born a minute apart — would go on to help guide FAU softball from a team that suffered its first losing season in program history back to a conference powerhouse.

Christina and Melissa Martinez are now in the midst of their last go-round for that softball team as part of their senior campaign — the last leg of a journey that took off when they arrived at FAU in 2012, but began much earlier.

Ever since the Martinez sisters were born in August of 1994, they have looked up to the only other sibling in their family, older brother Ricky Martinez.

When his sisters were born, Ricky was 4 years old and already playing youth league baseball. By the time his sisters had the motor skills to pick up a bat, older brother Ricky was there to teach them the game.

“Growing up, I wanted to do everything my brother did, and I wanted to be just like him,” Melissa Martinez said. “I even wanted to wear his clothing.” 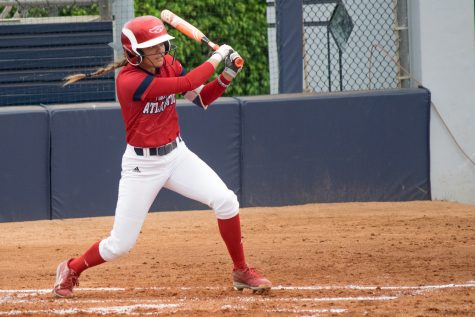 Sitting only behind Emily Lochten, who has 33 RBIs, Melissa Martinez has become one of the Owls biggest producers with runners on base. Ryan Lynch | Multimedia Editor

The young twins would follow in their older brother’s footsteps, getting their first taste of organized softball at the age of 7. The two joined a recreation league for the Boys and Girls Club for a team known as The Bumblebees.

Since then, the Martinez sisters have been inseparable on the field, competing on the same team for their entire playing careers.

“We did not want to play in college if we were not together,” said Melissa. “We did get offers from separate schools, but that would never happen.”

But the friendship and camaraderie shared between the two isn’t confined to the softball diamond.

Besides sharing a bedroom during their childhood, they have remained roommates all the way through college, sharing a college dorm as well as an off-campus residence after their freshman year.

With the exception of elementary school, the two sisters have shared the same classes as well. Their bond is what played the ultimate deciding factor as to why the twins selected FAU after attending Felix Varela High School.

“We did not want to play in college if we were not together,” said Melissa. “We did get offers from separate schools, but that would never happen.”

The sisters said that their commitment to attending college together outweighed the importance of playing softball. 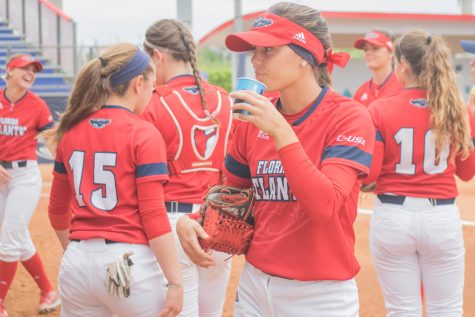 “We weren’t going to school specifically for softball, we looked at [FAU] as a whole,” Melissa said. “The beach is right there, it’s a beautiful area and when we came here it was just awesome.”

FAU head softball coach Joan Joyce struggled to differentiate the twins, saying that they are “exactly the same.”

“The only thing that happened in the four years was Mel grew just a little bit more than Christina did,” Joyce joked. “For like the first two years I couldn’t tell them apart, and I’m sure nobody could.”

One person who can tell the twins apart is their mother Rosa Martinez.

“To me they don’t even look alike,” she said. “If I look at them they’re just different looking, and I understand no one sees that, but as a mom I see it. I don’t know if it’s in their personality but they don’t look alike to me.”

Prior to the twins first season as Owls, the team experienced its first losing season in its 18-year history, finishing with a record of 15-39.

Since their enrollment, FAU has steadily improved. In their first year, the team won 28 games, followed by a 33-win season as sophomores and a 39-win season this past year.

When asked about the impact the Martinez sisters have had on the team, coach Joyce said, “If we had always had that kind of intensity with every single kid we brought in, we would always have a good team.”

“It was a pleasure having them because they’re both very good athletes, and great kids, and worked very, very, very hard on their game,” she continued.

Christina said, “I think the most memorable [moments] were definitely on the field, just because softball is such a big part of our life day in and day out, you come in and you work.”

Her younger sister Melissa elaborated: “The last year was definitely making it to regionals … The second our name popped up in the bracket we went insane and felt almost like crying, probably did cry.”

However, graduation — the end of an era — is rapidly approaching.

“I feel like that’s when I graduate from being a kid,” said Christina.

Melissa buffered her sister’s sentiments and said, “I feel like the end of softball is the end of my childhood.”

Both sisters share a mutual feeling of optimism for their individual futures, while appreciating all that they’ve accomplished up to this point. They believe that the closing of one door signifies the opening of another.

Christina and Melissa are hopeful that they will arrive at the same destination, as both sisters are majoring in elementary education with hopes of one day teaching at the same school together.

No matter what happens in the final season for Christina and Melissa, they’ve won in the eyes of the Martinez family.

As the twin sisters near the end of their softball careers, their coach remains thankful for the opportunity to watch them grow over the years.

“They gave you 100 percent every single day,” said Joyce. “They’re ideal student-athletes. I probably couldn’t find one thing that’s wrong except that every time one comes up to bat the other one’s gotta be right next to me screaming at her, and it was both ways.”

Christopher Libreros is a contributing writer with the University Press. For information on this or other stories, email [email protected] or tweet him @ChrisIsAirborne.