Both teams are ranked in the top 25 and have been led by strong pitching. 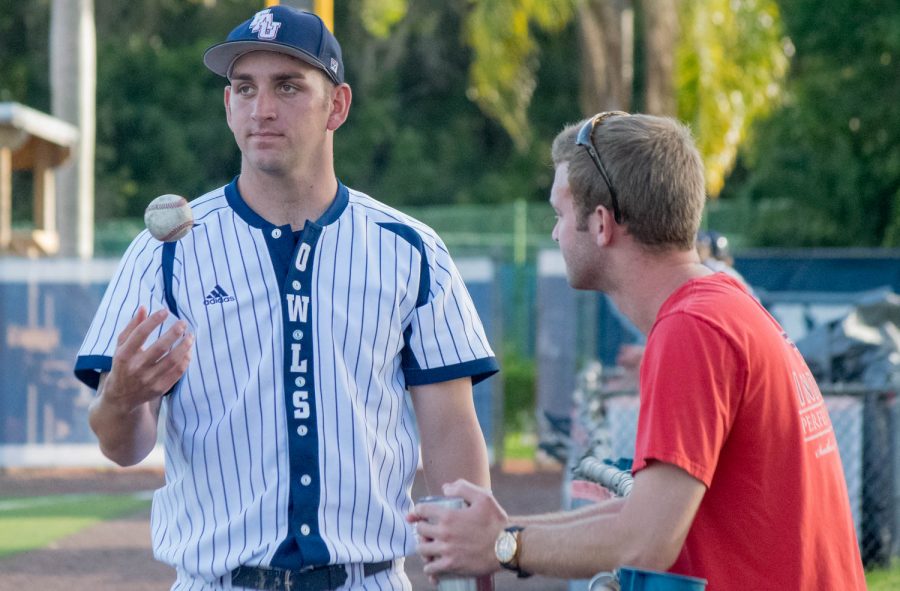 The first is success.

The USA Today Coaches’ Poll ranks the baseball team as the 17th best in the country and the softball team as the 22nd team in the nation. Both rankings are the highest in their respective sport in Conference USA.

The second similarity is how each team achieved this success: Pitching.

The softball team holds an ERA of 1.13, the second best in the nation. Head coach John McCormack’s baseball team gives up an average of 2.71 earned runs per game, the ninth best in the country. Both lead the conference.

“I said the reason that we were picked No. 1 in the conference, I feel, is because of our pitching staff,” head coach Joan Joyce said, referring to Conference USA’s preseason coaches’ poll.

Junior Kylee Hanson leads the way for all of FAU’s pitchers, holding the country’s second lowest ERA of 0.72. She also has the eighth most strikeouts (209) and leads the country in hits allowed per game (3.28). She threw a no-hitter against the University of Tulsa on Feb. 13 and currently sports a record of 20-3.

Not to be outdone, junior Amanda WIlson (1.46 ERA) and sophomore Tatum Buckley (1.58 ERA) are directly behind Hanson, sitting second and third respectively in Conference USA’s ERA leaders. Wilson is 11-4, while Buckley is 6-0.

“They’re both amazing pitchers, that’s why we have a successful team, because our pitchers keep their balls low and ERA down,” Buckley said of her fellow hurlers after a March 10 doubleheader against Robert Morris University. “Just sitting in [on] their bullpens and hearing what they talk about, how they throw to certain batters, how hard they work. It’s very helpful and they’re good people to look up to.”

McCormack’s pitching staff has been able to obtain its success by keeping opposing base runners to a minimum. The team is ninth in the country and tops in the conference in WHIP (walks plus hits allowed per inning), with a mark of 1.14.

“[Pitching] coach [Jason] Jackson is a head coach at any other school, and you never worry about pitching here, he’s going to get it done,” Preseason All-American shortstop CJ Chatham said.

Sophomore Marc Stewart has been McCormack’s most reliable pitcher this season. He leads the team with a 2.42 ERA — fifth in Conference USA — and his five wins are tied with senior Brandon Rhodes for the third most in the conference. The team has also won all nine games that Stewart has pitched in.

“He’s kept us in games, so it gives the offense a chance,” McCormack said. “If you look at his numbers, his ERA is low, he gives up some hits but doesn’t walk a lot of guys. He doesn’t get into a lot of trouble, so it gives us an opportunity to score some runs and the guys really like playing behind him.”

Rounding out the starting rotation are redshirt junior Sean Labsan, who is 4-1 with an ERA of 1.74, and redshirt sophomore David McKay, who is 2-2 with a 3.00 ERA.

McCormack also utilizes a bullpen that has four pitchers (with at least 10 innings of work this season) with an ERA under 2.00, led by junior closer Cameron Ragsdale. Ragsdale holds an ERA of 1.10 and has converted 11 saves, tied for the second most in the nation.

Redshirt senior Devon Carr has appeared in 20 games out of the bullpen, the second most in the conference.

Rhodes is McCormack’s only pitcher who has pitched more than five innings with an ERA that hovers above 3.00.

Both teams have realistic goals of winning the Conference USA championship at the end of the season, but for those goals to become a reality, pitching will have to guide the way.

All stats as of Thursday, April 21.