At the halfway mark of the season the Owls sit on top of Conference USA. 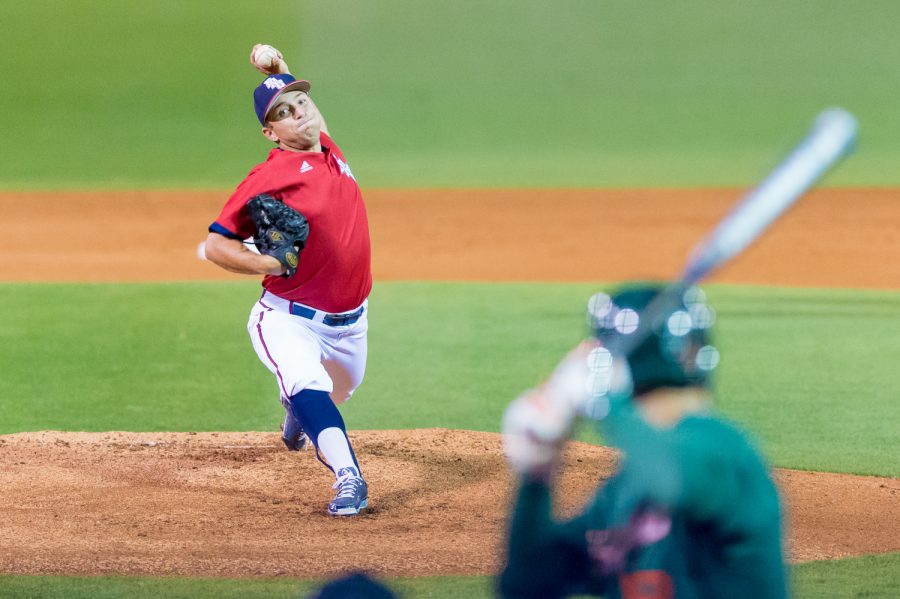 ollege baseball has reached the midway point of the season and Florida Atlantic’s team sits in a first-place tie for the Conference USA lead and is ranked No. 12 in the nation, according to the National Collegiate Baseball Writers Association.

The Owls offense has plenty of star power; its shortstop is a preseason All-American, and two players have won Conference USA’s Hitter of the Week. Meanwhile, FAU’s pitching staff boasts the lowest ERA in the conference and the seventh lowest in the country.

Now that the season is two months old, it’s time for the midseason report card. University Press sports editor Brendan Feeney determined the following grades, which are based on both performance and expectations entering the season.

rior to the season, coach John McCormack didn’t talk much about his pitching staff, mainly because his confidence in his pitchers wouldn’t let him worry about it.

“The pitching I’m not as concerned about as the offense,” McCormack said in the preseason. “Offensively, there’s going to be a little bit of a challenge.”

Stewart has impressed in his first season, boasting Conference USA’s fourth lowest ERA (2.03) and holding opponents to the sixth lowest batting average (.204). He holds a record of 4-0.

Also with a record of 4-0 is Labsan, who has only allowed one run in 22 innings of work.

The four have helped contribute to the eighth best pitching staff in the nation, in terms of hits allowed per game.

“Last year we had a more experienced [staff],” Rhodes said. “This year it’s a lot of new guys, so we have to take it one game at a time.”

Despite this, Stewart and Labsan have thrown well this year and each deserve A’s.

Rhodes was the team’s ace entering the season and McKay has been inconsistent, as he’s been unable to get past the third inning twice. Both of those pitchers receive C’s.

he Owls infield consists of three experienced leaders and three newcomers. All three of the returning Owls have received recognition for their work this season.

“You can’t really look into any of the preseason stuff,” Chatham said before the season kicked off. “It’s all about what you do in the season. I have to do it during the spring.”

The shortstop leads the team with a .376 batting average and is the ranked the No. 16 college prospect for June’s Major League Baseball Draft, according to Division I Baseball.

Junior second baseman Stephen Kerr and redshirt junior first baseman Esteban Puerta have each taken home a Conference USA Hitter of the Week award and both hold a batting average above .300.

Frank and Lambert have swapped catching duties, while Langham has held down the hot corner since the start of the season. He has not committed an error yet this year.

“He works the count, he has good at-bats, it’s nice having him down there,” coach John McCormack said of his third baseman.

Frank and Lambert share a combined .290 batting average and have more than held their own this season — especially for two players who did not expect to start at catcher in the spring until junior catcher Kevin Abraham found out he had Non-Hodgkin lymphoma and would not be able to play this season.

Overall, the six main infielders hold a batting average of .323, but Langham’s .250 batting average and the 19 combined errors prevent the group’s grade from becoming an A.

AU’s outfield — left fielder Christian Dicks, center fielder Billy Endris and right fielder Brett Lashley — give the Owls plenty of experience, as all are seniors in their final season as Owls.

Dicks led last year’s team with eight home runs. Despite having increased his batting average from .268 to .293, he currently has no home runs and has struck out a team-high 31 times.

Lashley finds himself in second place in a category that isn’t all that fun: He has been hit by a conference-high nine pitches this season. The All-Conference USA Preseason Team member is the only player besides Kerr and Chatham to record 20 runs and hits.

When necessary, redshirt sophomore Jose Bonilla Traverso has served as the Owls fourth outfielder. But he’s struggled at the plate when he’s had chances so far, recording seven hits in 40 at-bats.

The offensive input needs to keep improving, but the outfielders are a huge reason why the Owls have the 22nd best fielding percentage in the nation. Out of the team’s 22 errors, the foursome have only committed two.

he best group on this year’s team is its bullpen.

Six of the seven players who have pitched over 10 innings hold an ERA of under 2.00, including senior Devon Carr, who has yet to give up an earned run this season in 14 1/3 innings this year.

Junior closer Cameron Ragsdale sits in a seventh-place tie in the country with eight saves.

urrently, the Owls lead Conference USA in fielding percentage and ERA. They have also scored the third most runs in the conference.

With a record of 22-4, it is hard to poke holes in Florida Atlantic baseball.

Three of its losses came from teams that the Owls went on to beat in their respective series. The fourth was a 2-1 defeat to the top team in the nation, the University of Florida Gators.

McCormack’s preseason goal was to “win the league” and Chatham said he envisioned the team in Omaha.

If the team continues to improve over the next two months, there is no reason to believe their predictions can’t come true.