Despite offensive struggles, defense and pitching help them win series. 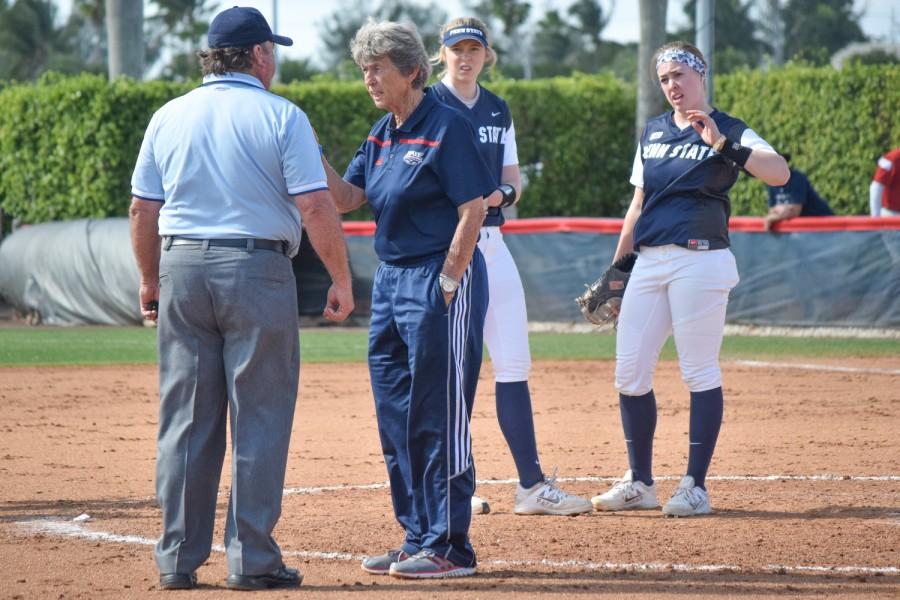 Head softball coach Joan Joyce talks to an umpire about a collision that had happened between second and third base during the Owls' game versus Penn State on Feb. 14. Ryan Lynch | Multimedia Editor

lorida Atlantic softball entered this weekend’s series scoring 27 runs in its prior four games, but struggled to keep that offensive momentum as the University of Southern Mississippi limited the team to eight runs in three games.

After splitting Friday’s doubleheader, which was delayed for more than two hours due to rain, the Owls (28-6, 5-1 Conference USA) defeated Southern Mississippi (16-18, 3-6 C-USA) on Saturday and are now tied with Marshall University for first place atop of the conference standings.

Junior pitcher Kylee Hanson pitched the entire first game, did not allow any runs and only gave up three hits. However, game two’s starting pitcher, junior Amanda Wilson, did not have the same success — allowing three fourth-inning runs in her fourth loss of the season.

“[Wilson] gave up two hits in a row to start the [fourth] inning,“ said head coach Joan Joyce. “But I think she was still sharp the whole game. She struck out the first five out of six batters.”

FAU will host Louisiana Tech University in its next series, with the first game on Friday, April 2, at 4 p.m.

Hanson dominated the Eagles offense in the first game of Saturday’s doubleheader, striking out 10 batters and not allowing a hit until the third inning. A couple walks from Hanson were able to put two runners on base for Southern Miss, but she struck out the next two batters to halt its offense.

In the fourth inning, Lochten would put the nail in the coffin for Southern Miss. She stepped to the plate and sent a solo home run over the left field fence, her ninth of the season.

Lochten finished 2-for-2 with two RBIs and two runs.

While the Owls offense began the game struggling, Wilson started strong by striking out the Eagles first four batters and not allowing a hit in the first three innings.

The Eagles sophomore pitcher Samantha Robles had more success than Block did, as she only allowed two hits and and two runs.

Southern Miss would take a 3-0 lead in the fourth inning, when junior shortstop Lauren Holifield doubled to right center, allowing outfielder sisters freshman Sydney and junior Arielle Pollock to both score as Rickey was unable to catch the ball cleanly.

Holifield scored later in the inning as she slid for home plate before senior catcher Mickey Bell could tag her after a hit by Bailey Stokes.

The comeback effort started in the seventh inning after Wilson did not allow a hit nor a run and gave the Owls offense a chance. Sophomore first baseman Tatum Buckley hit a two-run  home run to left field, which scored senior second baseman Christina Martinez and cut the deficit to 3-2.

However, the comeback would fall short as FAU’s next two batters struck out, marking the Owls first conference loss of the season.

FAU jumped out to an early 1-0 lead against Southern Miss when senior third baseman Carnesha Thompson singled to right field. She attempted to stretch the single to a double, but getting tagged out at second base gave Christina Martinez enough time to score.

Arielle Pollock tied the game up in the fourth inning as she let out a fly to left field and allowed Holifield to score.

However, in the Owls next at-bat, Martinez hit a ball to left-center field and advanced to second base, scoring Lochten. Buckley doubled to right center and scored Martinez to extend the lead to 3-1.

The Eagles reduced the deficit in the next inning, as Sydney Pollock scored on a hit by junior center fielder Rachel Johnson to give Southern Miss a chance to tie the game.

But like the Owls in the second game, the Eagles comeback attempt fell short as Hanson struck out two of the three batters in the seventh inning, and allowed only two hits in the last two innings to seal the win.

Hans Belot Jr. is a contributing writer with the University Press. For information regarding this or other stories, email [email protected] or Tweet him @Don_Phenom_.