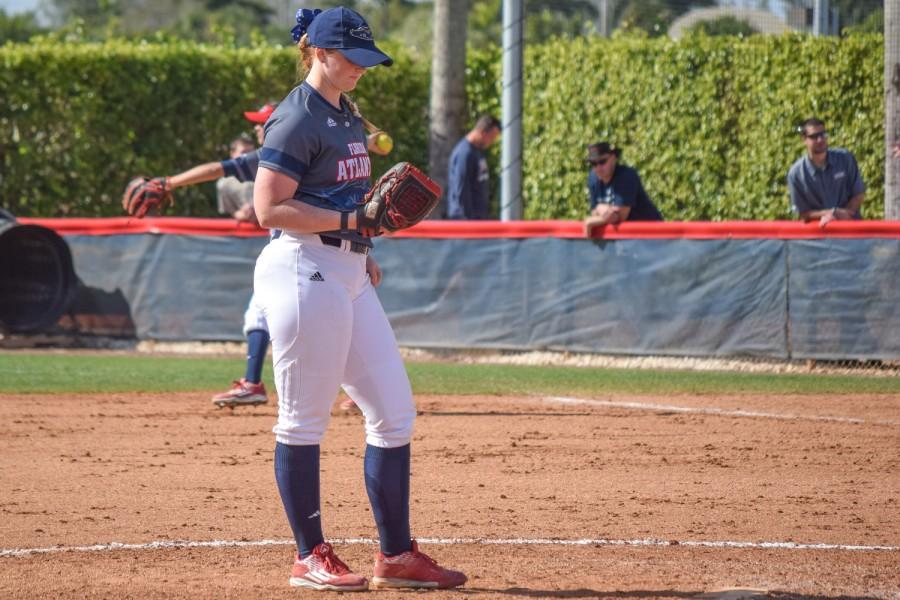 lorida Atlantic softball won both legs of its doubleheader Tuesday against the University of Detroit behind an eight-run mercy rule win and a 10-6 victory.

The first game of the doubleheader was never in doubt after the Owls (19-2) had a three-run first inning. Sophomore pitcher Tatum Buckley threw a three-hit complete game shutout to shut down Detroit.

Freshman pitcher Mia Olson started the Owls second game, but didn’t find the same success as Buckley. She allowed five runs, three earned, in two and two thirds innings of work. Junior pitcher Amanda Wilson replaced her, and after an Owls four-run third inning game she remained on the mound to help the FAU pick up its 19th win of the year.

The Owls will host Robert Morris University for a doubleheader on Thursday, March 10, as part of their Parent’s Weekend Tournament. Rutgers University, the University of Minnesota and Long Island University Brooklyn will be the Owls other three opponents over the weekend.

Below is a recap of each game:
Game One: Detroit 0, FAU 8 (5)
The Owls wasted no time jumping on the scoreboard in the first game of Tuesday’s doubleheader, scoring three runs in the first inning.

Senior center fielder Cristina Martinez, senior third baseman Carnesha Thompson and sophomore shortstop Emily Lochten each walked with one out to load the bases for Owls senior second baseman Melissa Martinez, who reached base on a fielding error while knocking in her twin sister and keeping the bases loaded.

After a strikeout, senior catcher Mickey Bell added a hit of her own with a two-out single to right field to score Thompson and Lochten on the play.

The following inning saw the Owls put up three more runs after a two-out single by Melissa Martinez cleared the bases.

Buckley added a run for herself in the fourth inning, when she singled to knock in Thompson.

Lochten walked with the bases loaded to score the Owls’ eighth and final run.
Game Two: Detroit 6, FAU 10
Game two of Tuesday’s doubleheader had an explosive first inning in which three runs scored for each team.

In the top half of the inning, Detroit junior designated hitter Alyssa James doubled to left-center field to score two runs off Olson. She then scored when senior catcher Jennifer Cottle reached base via an error made by sophomore first baseman Caitlin Hogue.

The Owls’ responded quickly by tying the game in the bottom half of the first behind a wild pitch, a sacrifice fly and a home run by Melissa Martinez.

After Detroit scored a run in the second and third inning to gain a two-run advantage, the Owls put up four runs in the bottom half of the third, to capture a 6-5 lead. The first two of the Owls’ runs came off bases-loaded walks before a wild pitch allowed Lochten to score the third straight run without the ball being hit into the field of play.

Both teams would trade one run in the fourth inning to make the score 8-6.

In the bottom of the fifth inning, the Owls extended their lead to four runs when a Thompson single scored both junior right fielder Delaney Rickey and Hogue.

Brendan Feeney is the sports editor of the University Press. To contact him regarding this or other stories, he can be reached at [email protected] or on Twitter.