The Owls have won a total of 17 games in their past two seasons. 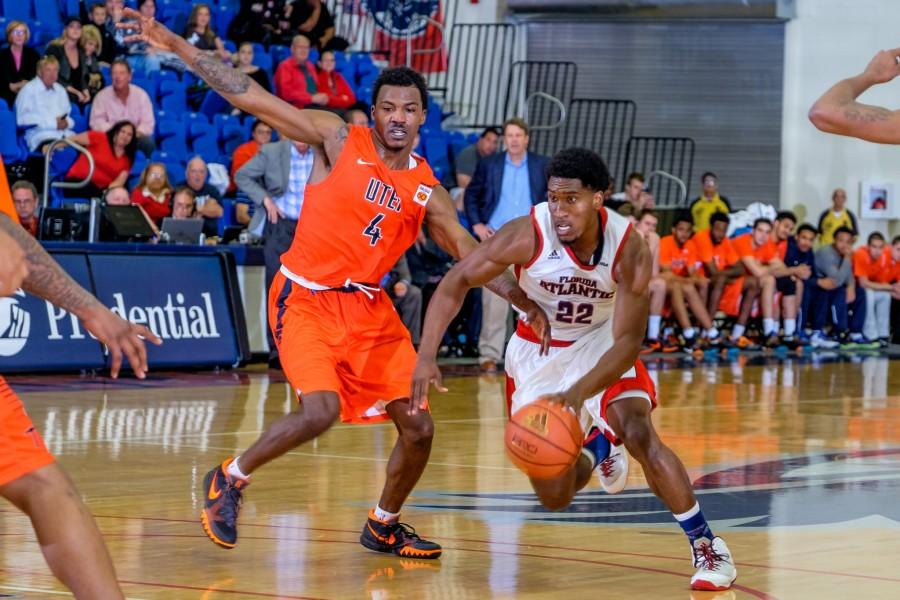 nother year gone by and another disappointing season for the Florida Atlantic men’s basketball program as the team finishes with a losing record for the fifth consecutive season.

Despite the recent struggles, head coach Michael Curry believes the program is heading in the right direction.

“We think we are developing a culture that can be successful for a long time,” Curry said. “We have gotten to that point where we’ve added depth to compete and we are in position to get much better.”

With a roster that featured seven new players this past season, including five freshmen, FAU is one of the youngest teams in Conference USA. Two of those five freshmen, guard Nick Rutherford and center Ronald Delph, started every game they played in.

Players like senior guard Solomon Poole and junior guard Marquan Botley, who held starting roles in previous years, were reduced to fewer minutes with the arrival of freshmen and transfer players.

“I don’t determine these players’ time [on the court], they determine who starts,” said Curry. “I don’t recruit a guy and tell him he’s going to start. I tell him you can come over here and compete for playing time. Nick and Ronald earned their starting role, I did not give it to them.”

One of those freshmen, forward Jeantal Cylla, began the year on the bench.

After impressing Curry by becoming one of the better defenders on the team, he earned a starting position when the program dismissed sophomore forward C.J. Turman in January. As the season grew, so did Cylla’s offense.

Cylla averaged 6.7 points per game in his first 12 collegiate games, however, after taking over the starting role, he averaged 12 points per game for the remainder of the season, including leading the team in scoring in conference games at 12.5 per game.

“He’s gifted offensively, he came here with that,” Curry said of the freshman. “We knew he’d be able to score as long as he stayed on the court. What we think of Jean is a guy who can emerge and become our leading scorer.”

Rutherford, the only freshman who started every game, finished 10th in Conference USA in assists per game at 3.4. That unselfishness, combined with his leadership abilities, earned him the starting job for all 33 games this season, according to Curry.

Despite the team’s youth, seniors Poole, forward Javier Lacunza and guard Jackson Trapp will be on their way out, and all three provided major contributions to the team. Lacunza and Trapp were two of the top three 3-point shooters in the team percentage wise, while Poole was fifth on the team in 3-pointers made at 22.

“We’re going to miss those guys on a consistency standpoint,” Curry said. “It doesn’t help us losing those guys but we do have new ones coming to replace those guys.”

The new replacements Curry mentioned are junior guard Frank Booker, who sat out this past season because of transfer eligibility, junior forward Matthew Reed, who missed most of last season with an injury and two incoming freshmen the head coach is keen on — Georgia natives, guard Devorious Brown and forward Jailyn Ingram.

“First thing I always want to do from each class is to sign a perimeter defender,” said Curry. “We did that the first year and the second year. Devorious is an excellent defender and he’s ready to play in Conference USA.”

“I think Jailyn is special,” Curry continued. “He’s 6’7 and can play both forward positions and we’re lucky to have him and Jeantal. I think he can be really good.”

FAU has been known for its late comebacks all season, although not many of them have resulted in a victory. The Owls trailed by more than five points in the second half in four of their eight victories and trailed at some point during the game in six out of their eight wins.

“It’s very difficult to dig a hole like that and come back and win,” said Curry. “It takes so much to come back. We have to do a better job starting. I’m looking at everything that I do and everything we do as a staff from our warmups to our practices.

Five of the Owls’ losses this season saw them trailing by double digits in the second half and coming back to cut the deficit down to five points, but unable to complete the comeback.

Along with the slow starts to games, Curry pointed to a rebounding problem, as the Owls were last in Conference USA in rebounding margin at -7.7 per game.

“We have to be a better rebounding team [next season],” Curry said. “We want to play at a faster pace and it starts with rebounding. With Turman’s departure and the injury to [junior forward Matthew] Reed, Delph was our only true big left.”

Although we are fresh into the offseason, coach Curry already has next year in the back of his mind.

“I don’t have a number but we expect to be significantly better. We expect to make jumps.”

Hans Belot Jr. is a contributing writer with the University Press. For information regarding this or other stories, email [email protected] or contact him on Twitter.