What you Missed Over Winter Break in FAU Sports

Women’s basketball is record-chasing, men’s basketball dismissed its leading scorer, the football team has changed its coaching staff and spring sports are gearing up for the coming season. 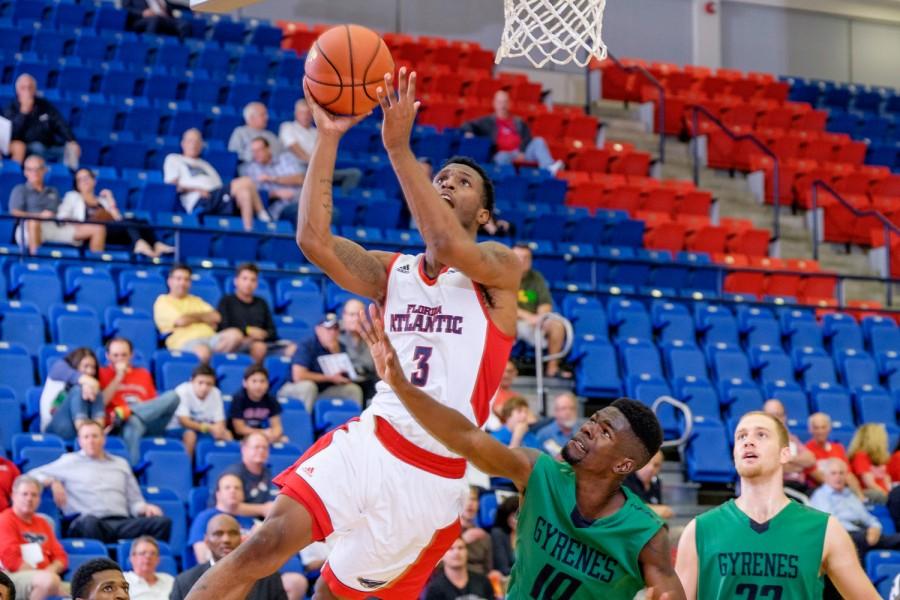 lorida Atlantic University took off for a month over winter break, but sports seasons never really end. Here is what you missed over the break and what to expect this upcoming semester from the Owls:

C.J. Turman was dismissed from the team in December. At the time, he was leading the Owls in points and rebounds. Photo by Mohammed F. Emran | Staff Photographer

Men’s Basketball
What you missed over winter break:

Men’s basketball began on a good note, defeating Ave Maria on Dec. 10 to improve to 2-5 on the season. Since then, the Owls have lost nine straight games to close out winter break with a record of 2-14, the second-worst record in all of Conference USA at the time.

The team snapped its losing streak after defeating Southern Miss 58-51 on Jan. 14, and followed that with another win on Saturday, Jan. 16 against Louisiana Tech. The Bulldogs held a 24-point lead in the second half, before a miraculous FAU comeback was capped off by a Jackson Trapp 3-pointer in the final seconds.

“Our players have been working hard, their spirits have been great,” said head coach Michael Curry after the team won its first game in over a month. “They’ve been working every day despite our record … We still have nine conference games, let’s try to take care of business at home one game at a time, and it started tonight.” FAU lost its next game on Thursday, Jan. 21 at UTEP falling to 4-15 on the season.

The Owls have had issues off the court as well. C.J. Turman was dismissed from the team on Dec. 21. According to a Florida Atlantic University Police Department report, Turman’s then girlfriend filed domestic abuse allegations on Oct. 2, 2015.

The allegations included improper physical contact on eight different occasions and intimidation from a coach of the men’s basketball team to keep quiet about the matter.

“C.J. has not lived up to the standards required to be a member of our basketball family,” Curry said following the announcement of Turman’s dismissal. “We have worked extremely hard to establish a culture within our program that will lead to a lifetime of success for our student-athletes. C.J. has not met the necessary obligations, which led to this decision. We love C.J. and wish only success for him in the future.”

Turman — who was leading the team in points and rebounds at the time of his dismissal —  filed countercharges the next day.

The University Press has requested all public records regarding this case. You can follow this story as it develops at upressonline.com.

With a 6-16 record, the Owls are on pace to finish the season with eight wins. That would give Florida Atlantic its lowest win total since the 2008-09 season when the team finished 6-26.

However, with a conference record of 4-5, FAU is in a tie for eighth place in Conference USA. At the end of the season, the top 12 teams in the conference standings will compete for a conference championship and an automatic bid into the NCAA Tournament. 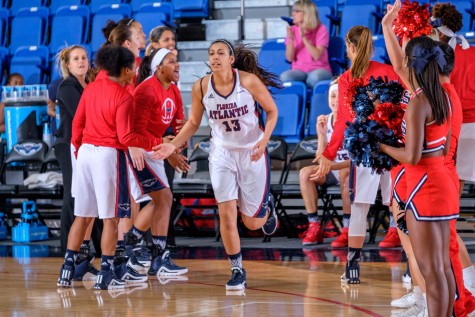 Junior guard Kat Wright is second on the team with 11.6 points per game. Photo by Mohammed F. Emran | Staff Photographer

Women’s Basketball
What you missed over winter break:

Women’s basketball started its break by allowing 102 points — the most it is allowed in a single game since 2003 — in a loss to Kansas State.

The Owls split their next two games entering their annual FAU Holiday Tournament, where the team defeated both Bethune-Cookman and Miami-Ohio to keep the championship in Boca Raton.

Following the tournament, Florida Atlantic won two of its next three games, including a 17 3-point performance against Marshall, to finish winter break with a 10-4 record.

Since returning from break, the team has lost five of six games, falling to 11-9 on the season.

“We want to take threes. That’s who we are, it’s what we’re about,” said coach Kellie Lewis-Jay in December.

Junior Kat Wright is also searching for her own spot in the record books. Through the team’s first 17 games, she has made 60 3-pointers on a .438 percent mark.

If Wright’s numbers stay steady, she could finish with the second most 3-pointers in a single season, only missing the record by three, at the second highest percentage in the team’s history.

The Owls now sit in a four-team tie for eighth place in Conference USA with a conference record of 3-5. The team will look to clinch a bye in March’s conference tournament by finishing the regular season strong, as one of the conference’s top four teams.

Football
What you missed over winter break:

Trickett’s offense averaged 332.9 passing yards per game last season at Samford, the third highest in the FCS. Samford’s offensive scoring improved every year under Trickett, finishing off at a 34.6 point per game mark in 2015.

Trickett will come to Boca Raton along with Garin Justice, FAU’s new offensive line coach. The two coached together as student/graduate assistants at West Virginia.

They also coached together at Florida State. Justice will be coming over from Concord where he led the team to a 40-17 record and two conference championships in his five seasons.

The Owls’ 2016 spring game is scheduled to be played on Saturday, April 16, where the team will get its first look at the Trickett-led offense.

The game is also likely to pit Jason Driskel and Daniel Parr against each other, as the quarterback battle will be in its beginning stages. Incoming freshman Steven Frank may also find himself in the chase for the starting job when fall rolls around.

With National Signing Day a month away, the Owls currently have 16 committed recruits, including eight three-star prospects, as rated by 247 Sports, an online sports site.

Softball
What to look for in the spring:

Florida Atlantic softball reached the NCAA tournament, but ran into the Florida Gators, the top ranked team in the country at the time and eventual National Champions. The team finished with a 39-19-1 record and finished second in Conference USA after dropping the conference championship to Western Kentucky.

Junior pitchers Kylee Hanson and Amanda Wilson head a pitching staff that led all of Conference USA in ERA and wins a season ago. Hanson recorded a team-high 18 wins and 219 strikeouts in 157.1 innings of work. She was recently named 2016’s Conference USA Softball Preseason Pitcher of the Year.

The Owls will look to continue their recent success when they host Southern Illinois University Edwardsville and Hofstra in a doubleheader as part of the FAU Kickoff Classic. This will commence the 2016 season on Feb. 12.

Penn State, Wright State and Tulsa round out the field of teams who will be visiting Boca Raton during the weekend. 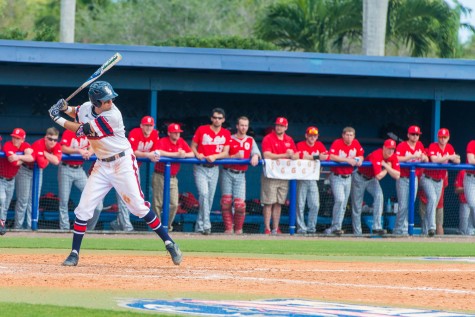 Baseball
What you missed over winter break:

Junior shortstop CJ Chatham was named to Louisville Slugger’s 2016 Preseason All-American team. He hit .355 a season ago, along with a team-high 22 doubles.

Last season, the Owls finished with their best record since 2004 at 47-17, ending in an NCAA regional. The team will have to replace six drafted players including Brendon Sanger, last year’s Conference USA Player of the Year.

Chatham and Dicks will lead the FAU offense along with junior second-baseman Stephen Kerr. Kerr — last year’s leadoff hitter — hit .307 in 2015 and made a play at second base that was selected as a SportsCenter Top 10 Play.

Florida Atlantic baseball will open its season with a doubleheader on Feb. 19, taking on both South Dakota State and Mississippi State. The team also will get the chance to take on Major League Baseball’s St. Louis Cardinals on March 2 in Jupiter, Florida.