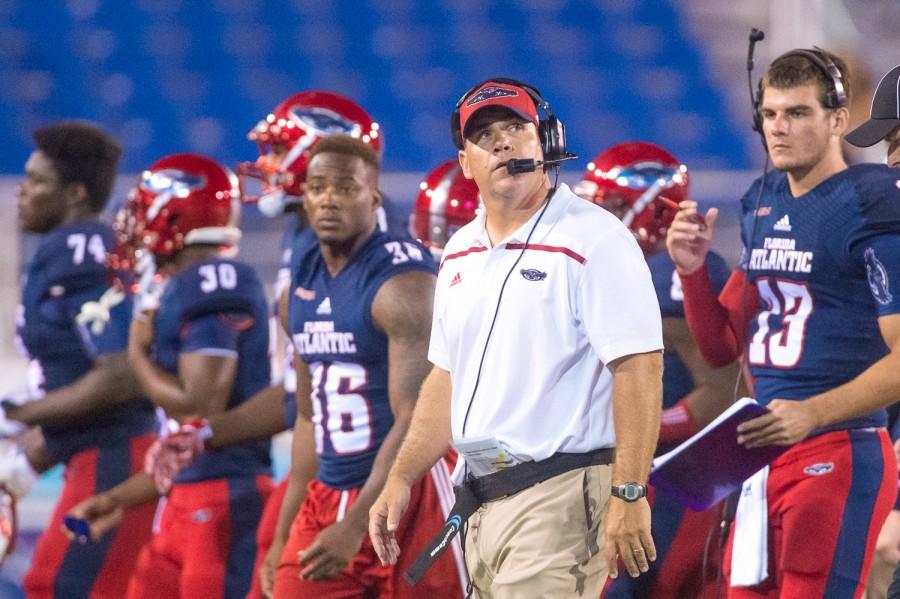 FAU head coach Charlie Partridge looks up at the scoreboard, with 2:44 left in the fourth quarter during his team’s 27-­26 loss to Rice on Oct. 10. Max Jackson | Staff Photographer

According to head coach Charlie Partridge, over half the class has won district championships, and three players have been in state championship games. More than half of the players were high school captains and have been all-state football players during their career.

This crop of recruits  — also known as the #Super16 — has big shoes to fill, as last year’s newcomers were some of the team’s best players. Four Owls were named to Conference USA’s All-Freshman Team: Ocie Rose, Jalen Young, Casey Winner and Azeez Al-Shaair.

Al-Shaair also received national attention as he was named to USA Today’s All Freshman Team one year after lineman Reggie Bain earned the same honor, via 247Sports.com.

“It’s hard to predict at this point, who’s going to come in and have that impact,” Partridge said. “Certainly over the long haul there’s going to be a number of them that come in and compete right away … There will be an impact for sure.”

“Whoever’s emotionally and physically ready to play, then from that group who learns the playbook the fastest, will have the fastest opportunity to play for us in the fall.”

The recruits have been graded as the fourth best incoming class in Conference USA according to Rivals, an online publication that specializes in college recruiting. It gave five players a three-star grade.

The website 247Sports.com rated select players higher, but wasn’t as optimistic when it came to the overall class. It pegged FAU’s recruiting class as the sixth best in the conference, but gave eight players a three-star grade.

No incoming Owl received four stars in either ranking, which holds a maximum of five stars. However, stars tend to be misleading at times.

Former FAU and current Washington Redskins’ running back Alfred Morris was only awarded with two stars out of high school.

No matter what the rating may be coming into the season, Partridge said he “cannot predict who or how many of these guys will contribute in the fall.”

“We’re building a program through this process, and that’s through recruiting and through development,” Partridge said. “We’re developing them, getting them to buy into the program and have pride in Florida Atlantic.”

Map of players below by multimedia editor Ryan Lynch:

Next week will mark the start of a weekly series where we will be highlighting two new recruits each week. The first will be quarterback Steven Frank on Monday, Feb. 8.