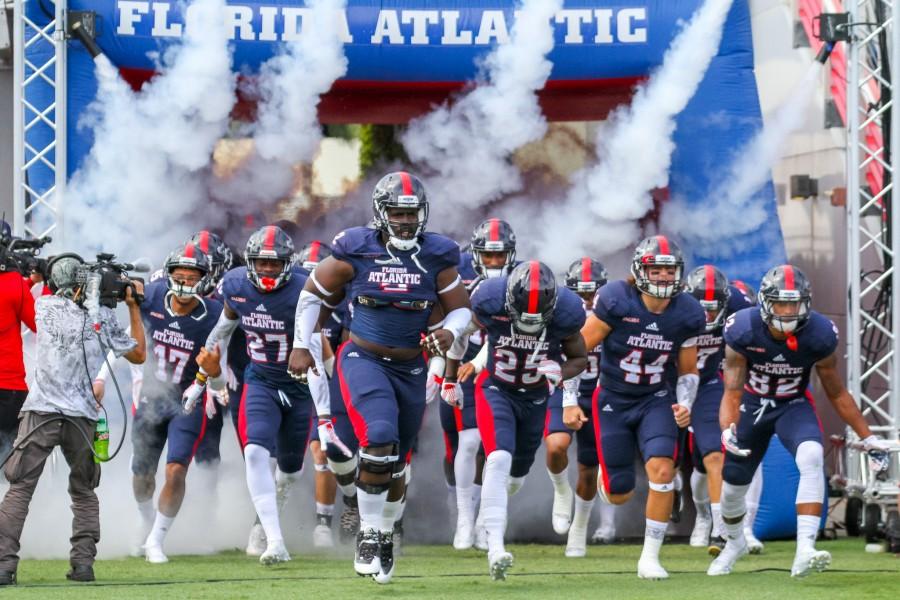 Florida Atlantic Football players come out of the tunnel before their game versus Marshall on Oct. 17, 2015. Mohammed F. Emran | Staff Photographer

Davis began wrestling toward the end of his freshman year after hearing it could help his football career.

At first he would just practice and get in shape. After some training though, he saw vast improvement going into his sophomore year.

“Just being faster, lighter on my feet,” Davis said of his development. “Then I started winning.”

The defensive tackle earned his high school’s Outstanding Wrestler of the Year award after recording the most pins during his junior season in 2015. Weighing in at 220, he led his team with the most pins in the 2014 season as well, wrestling against competitors who weighed 280 pounds.

“[Wrestling] made me low-grounded, [helped my] energy stay longer,” Davis said. “The conditioning really helped me stay focused and mentally prepared for football.”

The speed he gained from wrestling transitioned over to the football field. Davis compares his abilities and build to that of All-Pro defensive tackle Aaron Donald.

“[Donald’s] not that tall, weighs about 265 pounds, that’s like me,” Davis said. “[His] quick get-off, quick hands, footwork, nice upper body. That’s who I really try to follow my game after.”

Donald’s full package, which Davis claims he has, has helped the Florida native stand out to head coach Charlie Partridge.

“To find big kids that can move the way [Kevin McCrary] and Will Davis do … I couldn’t be happier,” Partridge said.

Excited to finally talk about @_younqstarr joining our team! Big man in the middle!! #WinToday pic.twitter.com/HgDWVueOAu

Joining Davis on his venture from Fort Pierce to Boca Raton will be high school teammate and childhood friend Antonio Hadden.

“We go back to middle school basketball,” Davis said. “We always talked about playing football. To see both our dreams unfold is a dream come true for the both of us.”

Our recruiting recap will continue Wednesday with Hadden.

Brendan Feeney is the sports editor of the University Press. To contact him regarding this or other stories, he can be reached at [email protected] or on Twitter.