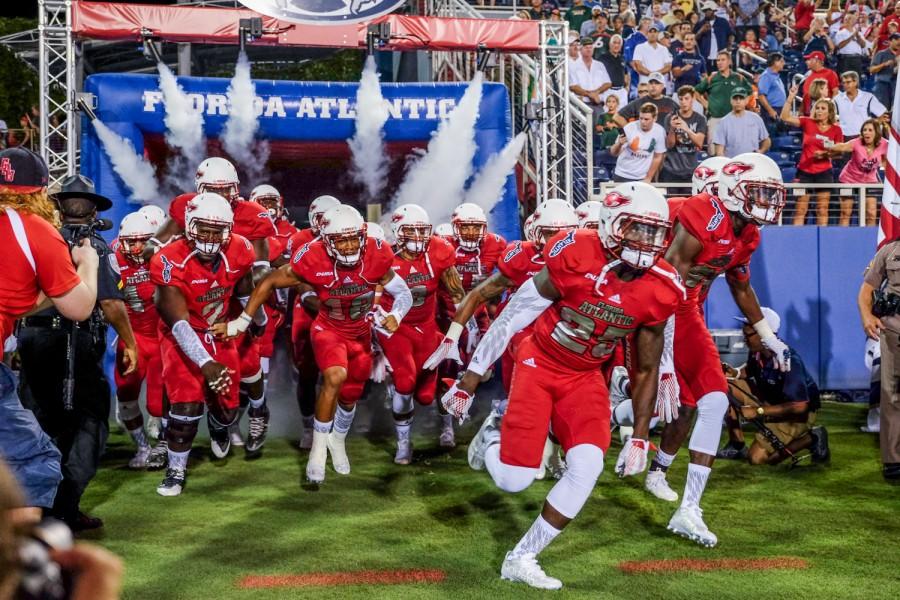 Florida Atlantic Football players enter the field before their game on Sept. 11, 2015 versus the University of Miami Hurricanes. Mohammed F. Emran | Staff Photographer

The top high school quarterback in the state of Illinois, according to the sports journalism website Scout, is headed to Florida Atlantic in the fall after signing with the football program on Wednesday, Feb. 2.

Steven Frank joins tight end Harrison Bryant of Georgia as the only two recruits — out of a total of 19 — who are coming from outside the Sunshine State.

“The quarterback position, you’re willing to go anywhere in the country to sign what you want to bring in,” head football coach Charlie Partridge said. “Steven was the quarterback that we found that we were excited about.”

Frank is just as excited to join the program as Partridge is to have him in Boca Raton. After completing his official visit to the campus, Frank said he felt right at home.

A multi-sport athlete at Oswego High School, Frank was named captain of both his football and basketball team during his junior and senior seasons.

Frank, who accounted for 88 touchdowns in his high school career, led his team to a conference championship all four years that he was under center. He was also named to the Illinois High School Association ALL-State Team (8A).

“You’re really looking for that whole package from a quarterback,” Partridge said. “What kind of leadership skills does he have? What kind of competitor is he?”

When Partridge visited Oswego to recruit Frank, he chose a day that the quarterback had a high school basketball game.

“That was really fun for me to see,” Partridge said. “The competitive nature in him takes over.”

That competitiveness will have a chance to show itself in preseason practices.

He will join current redshirt sophomore Jason Driskel and redshirt freshman Daniel Parr as the three main quarterbacks on the roster. Partridge gave no indication as to whether or not Frank has a chance to start in September.

Frank himself did not receive an update as to what would happen between the quarterbacks from Partridge, but does hope “to get on field and see what happens” while making a “positive impact on the team,” according to the self-proclaimed pocket-passer.

When asked why the FAU fan base will fall in love with him by the end of his collegiate career, Frank confidently responded: “I’m a playmaker; I love making plays.”

Our recruiting recap will continue Wednesday with incoming defensive back Korel Smith.