Owls will look to improve on last year’s campaign which saw them finish second in Conference USA. 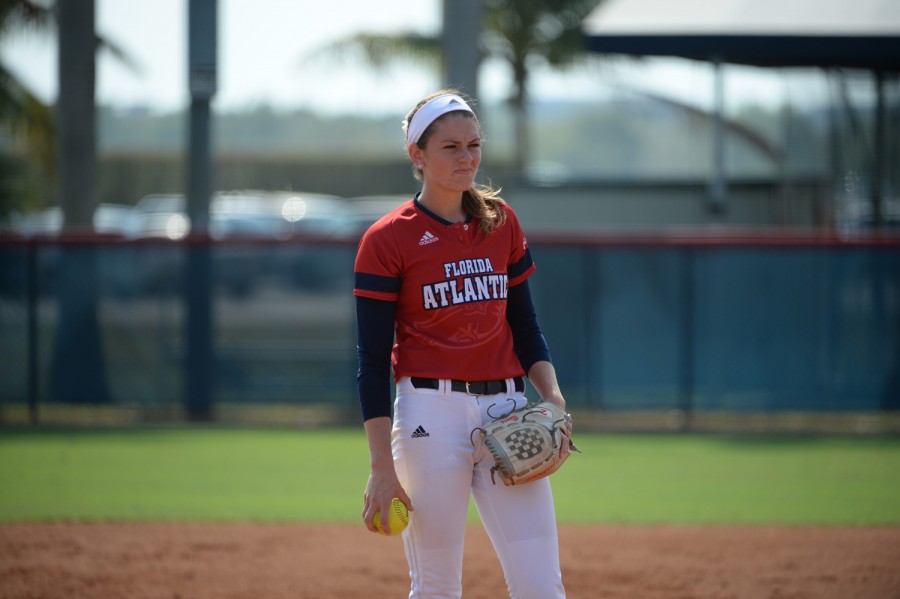 Expectations  have  never  been  higher  for  Florida Atlantic  softball  than  they  are  heading  into  the 2016 season.

The Owls will begin this season as the favorites to win  the  Conference  USA  championship,  as  voted  by the  conference’s  coaches.  They  received  141  of  the poll’s 144 possible points.

“It  makes  me  feel  good,  like  we’re  ready  for  the season  to  start,”  said  sophomore  shortstop  Emily Lochten. “We ended hard last year. It was tough losing to Western [Kentucky] and University of Florida, but I  feel  like  we’re  more  prepared  this  year  for  those teams than we were last year.” Lochten  was  one  of  three  Owls  to  gain  preseason recognition  as  she  and
senior  outfielder  Christina Martinez  were  named  to  Conference  USA’s  2016 Softball Preseason Team.  “It’s just a crazy feeling,” said Martinez. “It’s a great accomplishment to know my hard work has paid off and  our  team’s  hard  work  has  paid  off,  that  we’re getting  acknowledged  for  all  the  great  things  we’ve done last season and how much we’ve improved.” The third player to receive that honor was also named Conference USA’s Preseason Pitcher of the Year, junior Kylee Hanson. However, Hanson

has an opposite view of the recognition compared to her teammate.
“Doesn’t  matter  ‘til  the  postseason,”  said  Hanson, who is looking for her team to improve on last year’s successful season, which ended after a 1-0 loss at the hands  of  the  Florida  Gators,  the  eventual  national champions, in an NCAA Regional. It was the first time the team reached the regional tournament since 2006. 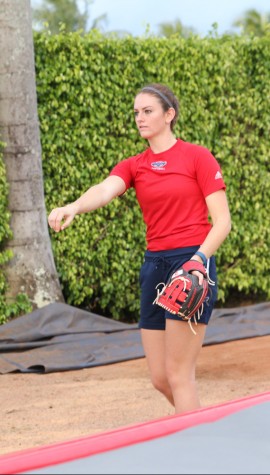 “It ended great,” said head coach Joan Joyce, reflecting on last year’s season. “We would like to have won the game, but I mean we gave them a really good battle for sure. Word on the street had it that they were shaking in their boots.”

The  team  made  it  to  the  tournament  thanks  to  an at-large  bid,  a  tournament  invitation  for  32  teams who  are  unable  to  win  their  respective  conference championship, after losing to Western Kentucky in the Conference USA championship. Preseason predictions pegged them as the third-best team in the conference entering last season. “They’re  stronger,  faster,  they  are  not  going  to  let anybody beat them,” Joyce said regarding the team’s loss. “That is their mentality right now.” Coach Joyce feels that her pitchers are a major reason why FAU is the conference’s team to beat.

“All  the  teams  in  our  conference  are  no  slouches and we’ve been picked No. 1, and I think it’s basically because of our pitching staff,” said Joyce. “Our pitching staff  is  better  than  all  of  the  pitching  staffs  [in  the conference].”

Hanson and junior Amanda Wilson return with the team’s two lowest ERAs from last year’s pitching staff that  blew  away  the  rest  of  Conference  USA  in  ERAs a  season  ago,  at  1.84.

Prior to last season, Owls’ recent graduate Samantha Messer  was  dubbed  Preseason  Pitcher  of  the  Year, helping  Hanson  sit  below  the  radar  entering  the season.  Messer  finished  the  season  with  the  Owls’ third-lowest ERA, behind Hanson and Wilson. 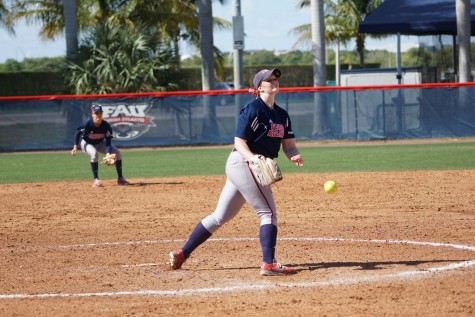 Pitcher Amanda Wilson (right) follows through on a pitch during a game last year. Photo courtesy of FAU Athletics

Hanson  said  she  feels  no  pressure  now  that  the expectations are on her shoulders coming into 2016. Her coach holds the same beliefs.

“I think Kylee will handle it just fine,” said Joyce. “Probably the best pitcher we’ve had here was Nikki Myers,” continued the coach. Myers was a finalist for the  2002  Softball  National  Player  of  the  Year,  and  a two-time Second Team All-American. “I think Kylee is almost to Nikki’s level. She’s looked really good the whole year. When we had the break at  Christmas,  Kylee  was  ready  ….  [She]  spotted  the ball  so  well  in  the  fall.  I  think  that  the  addition  of her learning how to throw the low riseball last year was what made her so much better, because [hitters] stay off of her high one. And then she’ll go  to  the  dropball  to  the  curveball  and screwball all in the same place and now [hitters] don’t know what to expect.” Joyce is also confident that the rest of her  pitchers  will  be  able  to  handle  any situation thrown at them on days Hanson and  Wilson  can’t  control  the  rubber. She  believes  this  pitching  staff  has  the potential  to  be  one  of  the  greatest  FAU has ever witnessed.

The barrier that the Owls will have to break through for a championship season will be on offense. Last season they had the eighth highest team batting average out of 12 teams in Conference USA. However, they were able to manufacture runs  utilizing  a  small-ball  offense, and  score  the  third-most  runs  in  the conference  behind  the  second-most steals and most sacrifice hits.