The team made 10 3-pointers, inching closer to the school’s all-time record for a season 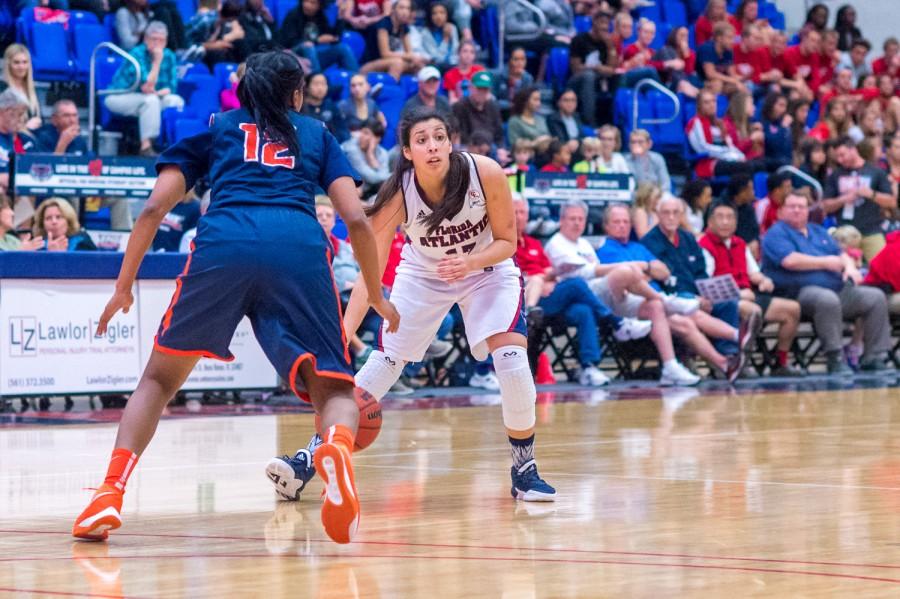 fter Florida Atlantic women’s basketball lost its fourth straight game at the hands of UTEP on Jan. 21, senior guard Morgan Robinson was frustrated about her team’s state of play.

Something has to change…

The senior’s message was heard loud and clear as the Owls (11-7, 3-4 Conference USA) defeated the University of Texas at San Antonio Roadrunners 64-51 on Saturday night.

“I was getting sick of losing,” said Robinson. “We were losing the same way each game, so I think today was a good way for us to respond.”

The Owls’ defense shined as they held UTSA to 28 percent shooting throughout the game. They were also able to force 19 turnovers, leading to 13 more points off turnovers than their opponent.

“I thought we did a great job defensively, it may have been our best defensive effort of the year,” said head women’s basketball coach Kellie Lewis-Jay.

FAU had its own offensive struggles early on as the Roadrunners (6-11, 2-5 Conference USA) held the Owls to 29 percent shooting in the first half — including only 18 percent in the first quarter — carrying a two-point lead into halftime.

“I got on them at halftime pretty good and I think they responded really well and came out and executed,” said Lewis-Jay.

FAU opened up the second half scoring 11 of the first 15 points, opening up a five-point lead led by Robinson. She finished the game scoring 12 points.

Redshirt senior guard Ali Gorrell added a team-high 14 points, 13 of which came in the second half.

They helped contribute for three of the team’s 10 3-pointers.

“That’s a lot of points we put on the board from the three … that’s our identity that’s who we are,” said Lewis-Jay.

The team is currently on pace to break the single-season record of 264 made 3-pointers, which was set just two seasons ago.

“That’s pretty cool,” said junior forward Kat Wright after finding out about the record. “I really hope that we keep shooting the ball the way we are now and hopefully we can make that record.”

The Roadrunners were led by senior Mathilde Hergott, who scored a game-high 20 points. Tesha Smith, the team’s leading scorer entering the game, battled early foul trouble and was only able to play 11 minutes in the game, adding only two points of her own.

The Owls will visit Old Dominion on Thursday, Jan. 28, to begin a short two-game road trip.