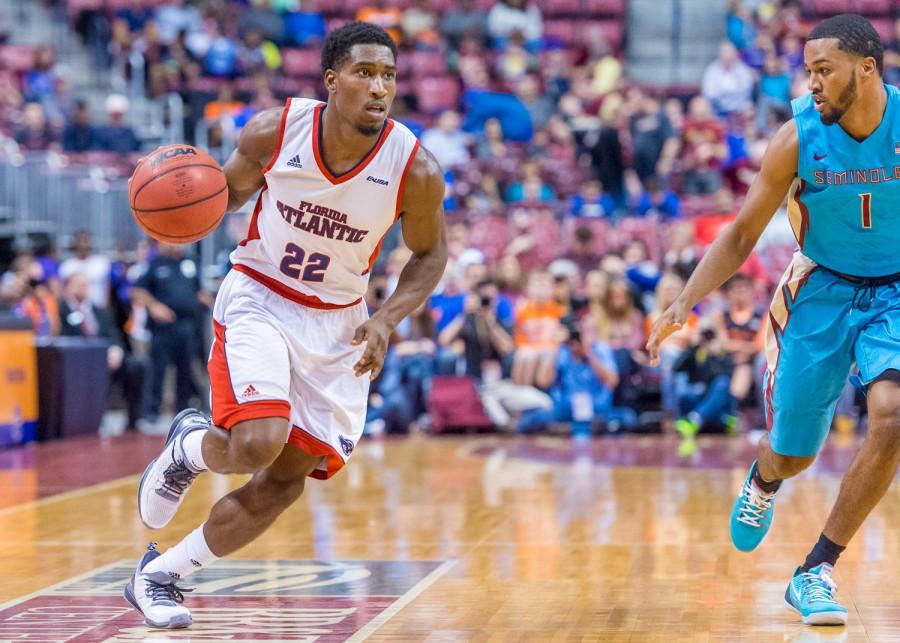 Junior guard Solomon Poole (22) looks for an open route toward the basket late in the first half of play against Florida State on Dec. 20. Max Jackson | Staff Photographer

lorida Atlantic men’s basketball was not able to overcome a tough shooting night, dropping its eighth straight game and second straight to open up conference play.

The Owls (2-13, 0-2 Conference USA) — who rank second to last in scoring offense in Conference USA — shot only 38 percent from the field, making 6-of-24 from behind the three-point arc.

Marshall jumped to an early 6-0 lead over FAU before freshman forward Jeantal Cylla ended the drought with a jumper. The Owls never got close again and went into halftime down 42-26.

Marshall came out the locker room hot in the second half, knocking down four of their first five shots. Senior guard Solomon Poole scored eight straight points to cut the lead down to 16 points, but the Herd regained control and extended their lead back to 20 to put the game away.

Sophomore center Ronald Delph led the Owls with 11 rebounds, but the team was once again outrebounded in the game, 47-37. The Herd had two players with double-digit rebounds, with Taylor recording 10 and James Kelly with 15.

Junior guard Adonis Filer led the Owls in scoring with 17 points, followed by Cylla and Poole with 13 and 11 points respectively.

The Owls will travel to Bowling Green to take on Western Kentucky Saturday, Jan. 9, at 3 p.m.

Hans Belot Jr. is a contributing writer with the University Press. To contact him on this or other stories, email him at [email protected].