It was right under all of our noses. Two days later, the university is taking action. 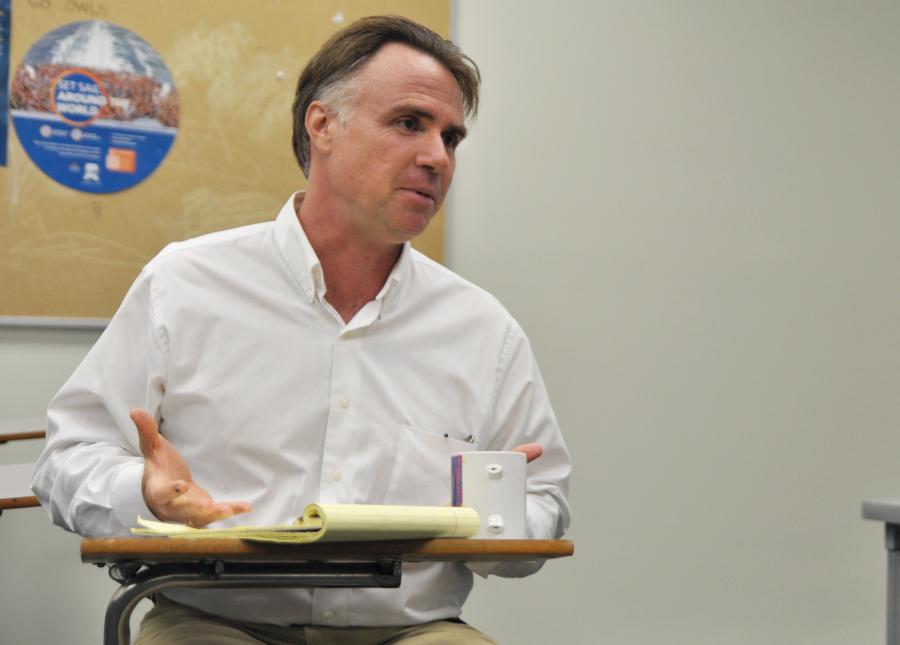 Update: A previous version of this story listed James Tracy to teach one course over the Spring 2016 semester. A Departmental Course Schedule reveals he’s slated to teach three.

he same professor who was covered over 800 times by mainstream media when he publicized his conspiracy theories on mass shootings just received more attention — his possible departure from Florida Atlantic.

Wednesday, FAU announced that they’re taking steps to terminate James Tracy from his professor role at the school.

Two days earlier, James Tracy wrote an article for the Sun Sentinel about whether the Sandy Hook massacre was staged. Tracy, a professor at FAU since 2002, wrote “The Sandy Hook Massacre: Unanswered Questions and Missing Information” on three years earlier for his personal blog, memoryholeblog.com.

Tracy’s article was in response to another Sun Sentinel story — a published open letter to the professor written by Lenny and Veronique Pozner, parents of one of the Sandy Hook victims, 6-year-old Noah.

Their story, titled “Sandy Hook Massacre 3rd Anniversary: Two parents target FAU conspiracy theorist,” criticized Tracy’s conspiracies, along with the fame he garnered from it all, saying he “personally sought to cause our family pain and anguish.” The Pozners described how Tracy sent them a letter demanding proof that their son Noah existed and was the boy in the picture the media aired. They eventually filed a police report against him for harassment.

The Pozners finished their letter, calling to FAU to “reasses if their priorities properly reflect the best interests of their staff, donors and — most importantly — their students.”

They continued, “’The First Amendment guarantees freedom of speech, but the Constitution does not guarantee that you can’t be fired for expressing your beliefs as part of your job,’ says the National Education Association. ‘The courts could decide either way and the burden of proof shifts sharply to the professor.’”

Four days later, Tracy published this response, through the Sun Sentinel. “Leonid ‘Lenny’ and Veronique Pozner mounted a vicious attack that sought to intimidate my employer into removing my tenure and depriving me of my livelihood because of the questions I’ve raised concerning the Sandy Hook event,” Tracy said. He finished his column with a statement saying if teaching that mass media should be interrogated “is an outmoded ideal and a skill that can no longer be practiced or taught to young adults, I stand guilty as charged.”

In Tracy’s tagline at the bottom of the article, he identified himself as a “former FAU professor” despite his name on the FAU Spring 2016 schedule under three classes, U.S. Journalism, Intro to Multimedia Studies and Public Opinion and Modernity.

The UP reached out to FAU spokesperson Lisa Metcalf about this inconsistency. When asked if the tagline suggested that Tracy was no longer teaching at FAU, Metcalf responded, “the submission was made independently of FAU. I do not know why it said ‘former.’”

The Sun Sentinel has since updated their story to remove the word “former,” but you can still see a remnant of the original in its URL: “… sfl-former-fau-professor-questions-whether-sandy-hook-massacre-was-staged.”

The UP attempted to contact James Tracy about the discrepancy but have not heard back as of publication time.

Tracy commented on his personal blog, memoryhole.com about the tagline confusion. “Apparently there is a rather limited threshold for fact checking there,” he said. “Or this is wishful thinking.”

Now, two days later, the school has issued a statement announcing the action it’s taking toward Tracy.  It reads:

In light of numerous requests from media outlets and the public, the University makes the following statement:

Today, James Tracy, an associate professor in the School of Communication and Multimedia Studies, was served a Notice of Proposed Discipline — Termination by the Vice Provost for Academic Affairs at Florida Atlantic University.

In accordance with the University’s Collective Bargaining Agreement with the United Faculty of Florida union, by which the University and James Tracy are bound, faculty who receive such notice are afforded a grievance process. James Tracy has 10 days to respond to the notice after which final action may be taken.

In accordance with university practice regarding personnel issues, the university will make no further comment for the time being.

It’s unclear if Tracy already knew the statement was coming, causing him to sign off his column as a “former” professor.

This story will be updated as more information is released.