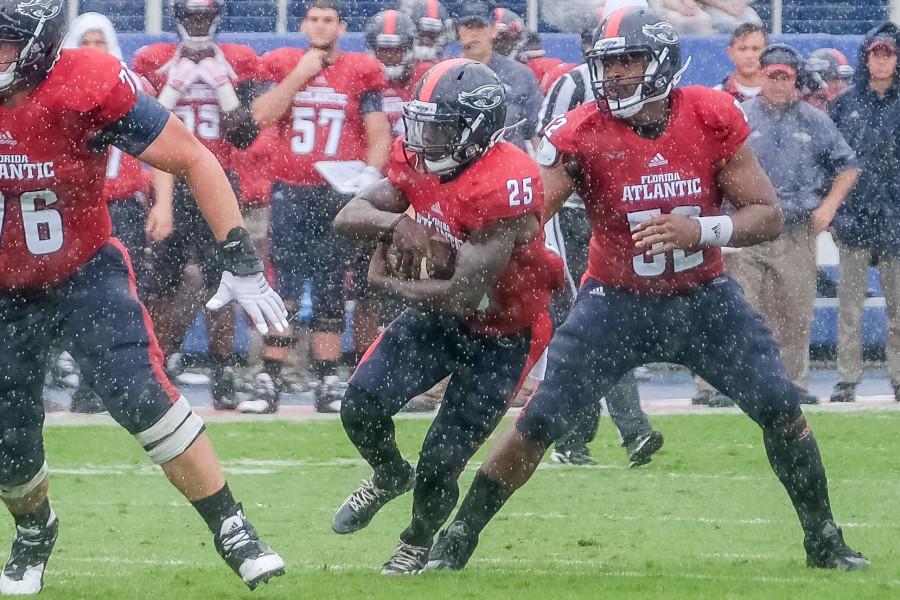 ootball lost their final home game of the season to the Middle Tennessee Blue Raiders 24-17 in a rain-soaked game. MTSU finished with 479 total yards, including 179 rushing yards.

The Owls (2-8, 2-5 C-USA), who finished with 297 total yards of offense, only had 75 total rushing yards. Two of the Owls’ leading rushers this season left the game due to injuries, with Trey Rodriguez leaving at the end of the first quarter and Jay Warren leaving the game early in the third quarter.

The Owls’ offense had an opportunity to tie the game at 24 with about nine minutes left in the fourth quarter, but senior wide receiver Jenson Stoshak had an unsportsmanlike conduct penalty called on him after originally scoring a touchdown from a pass from Jaquez Johnson. “I was caught up in the moment and it was a selfish play on my part that cost us the game,” said Stoshak.

With the ball on the Blue Raider 15-yard line, FAU was unable to score any points after Johnson fumbled on fourth down and three.

After punting the ball on their first drive, freshman cornerback Ocie Rose forced and recovered a fumble on the Blue Raiders. Senior quarterback Johnson threw a 20-yard touchdown pass to sophomore tight end Nate Terry to earn their first lead of the game 7-0.

Both teams exchanged the lead for much of the first half, with Middle Tennessee quarterback Brent Stockstill and Johnson throwing two pass touchdowns.

“They were two big plays where they had the empty switch route and the post corner and those were two plays we didn’t execute well enough,” said head coach Charlie Partridge.

Brent Stockstill finished the game with 301 passing yards, going 18-for-32 with two pass touchdowns and one interception.

“Jalen made a great play on the ball to tip it and to put me in position to intercept,” said Neasman.

After a 45-yard field goal by junior Greg Joseph on the ensuing drive tied the game at 17, Stockstill connected with Richie James once more on a pass touchdown.

With four minutes left in the game, Stoshak gave the Owls’ offense great field position after returning a punt 39 yards and almost breaking away for a score. However, FAU was unable to score a touchdown to tie the game, and it was over after Johnson could not complete a pass to sophomore receiver Kamrin Solomon.

With this being the final home game of the season, 15 seniors were honored at a ceremony before the game. “I come out every game giving it all I got, but today it was the truth this was the last time I’m going to play at FAU Stadium,” Johnson said.

The Owls travel to Gainesville next Saturday to take on the Florida Gators at noon on Nov. 21.

Hans Belot is a contributing writer for the University Press. To contact him on this or other article, email him at [email protected].