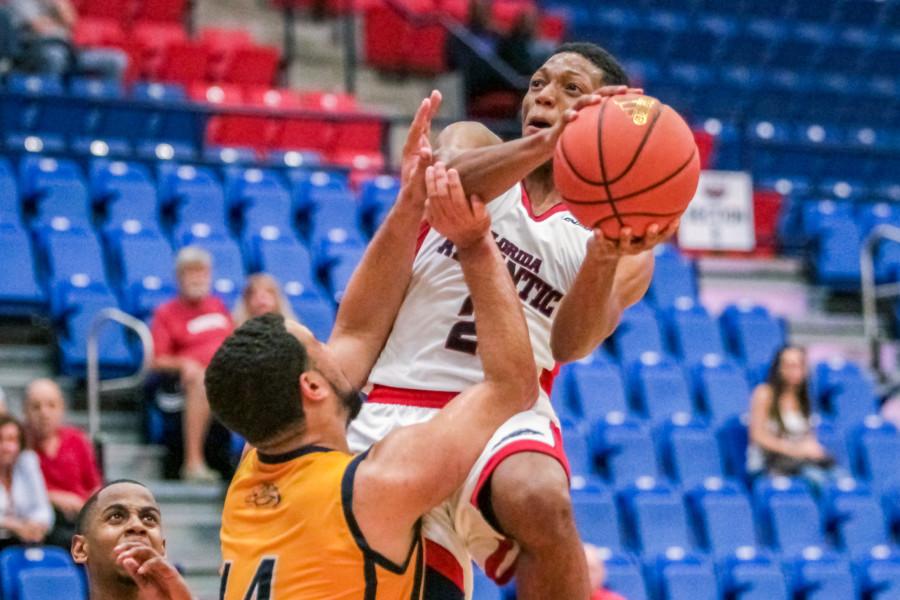 en’s basketball was unable to overcome a slow offensive start Tuesday night versus Warner University, losing to the Royals 75-72 in their home opener.

The Owls put up 50 points in the second half while tying the game with 12.1 seconds left in regulation after junior guard Marquan Botley hit two free throws.

On the ensuing Warner possession, Florida Atlantic (0-2) allowed Warner guard Warren Hall to get open and hit a jumper while getting fouled by freshman guard Nick Rutherford with 1.9 seconds left.

“A couple of guys did a really good job of battling to get us back into the game, but those plays don’t work for you if you don’t do the little things throughout the game,” head coach Michael Curry said.

Freshman forward Jeantal Cylla put up a halfcourt shot as time expired that hit the rim and bounced out, failing to keep the game alive.

Warner plays in the NAIA, a separate athletic governing body for smaller colleges in the US not affiliated with the NCAA.

“Not the effort at all, regardless of who you’re playing.” Curry said of the loss against the non NCAA opponent “I don’t know how to distinguish who I’m playing against to decide about effort and stuff. That’s disappointing.”

Guards Jackson Trapp and Botley both went through the first half without hitting a basket, going 0-4 and 0-5 respectively. Botley finished with 12 points on 2-of-12 shooting from the field while Trapp had eight on 2-of-9 shooting.

Cylla was the Owls’ leading scorer with 18 points. Sophomore center C.J. Turman recorded a double double with 16 points and 11 rebounds.

Turnovers came in bunches for both teams, with Warner (5-1) and FAU both losing the ball 13 times.

FAU will travel to Oxford, Ohio to play in the Men Against Breast Cancer tournament. They open up the weekend with a game versus Northwestern on Thursday Nov. 19 at 7 p.m.