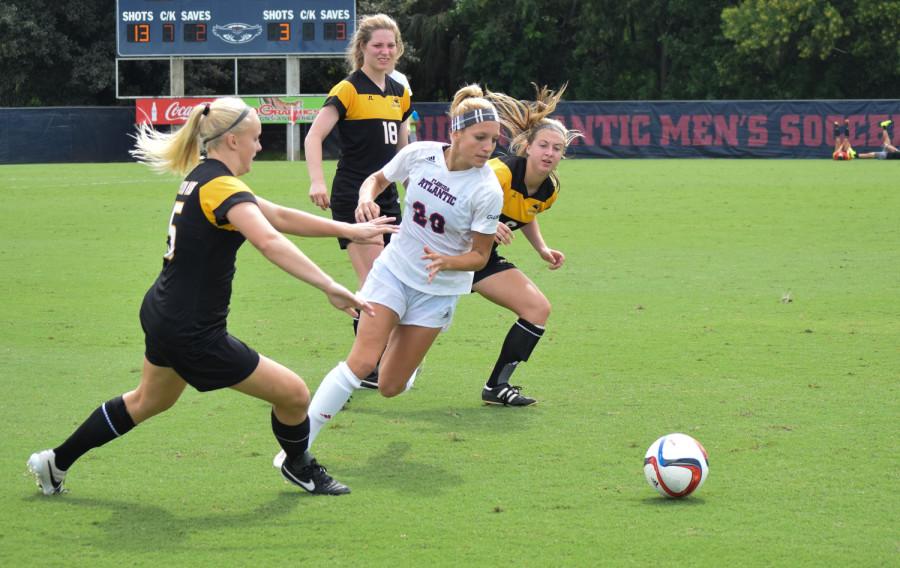 Sophomore midfielder Maddie Pung dribbles through a group of Southern Mississippi defenders during her team’s 3-0 win on Sunday. Photo by Ryan Lynch|Sports Editor

For the first time since joining Conference USA, Florida Atlantic (9-7, 3-3 C-USA) won consecutive games versus conference opponents. They are now on a three-game winning streak.

“We’re a team I like because we haven’t hit full stride yet,” coach Patrick Baker said. “We played good bits of soccer, but we have not played our best soccer yet and we will keep striving for that.”
Here’s what you need to know from this weekend:
Game One
FAU 2, LA Tech 0

The Owls’ defense did not allow a single shot in the first half, keeping LA Tech from creating chances. The Bulldogs ended the game with three total shots.

“We talked about a team shutout, and it had nothing to do with a lack of respect for Louisiana Tech, it’s just that we’ve missed some opportunities to shut some teams out,” Baker said. “We needed to send a little message to ourselves and our conference foes.”

In the 40th minute, Burt scored FAU’s first goal on a cross from Parry to give her team the 1-0 lead going into halftime.

Midway through the second half, Parry found the net in the 60th minute with a low shot on the goalkeeper’s right side, extending her team’s lead to 2-0.

Senior defender Jade Rhodes had the lone assist on Parry’s goal, which proved to be the final score of the game. Sydney Drinkwater had two saves in the shutout victory, while Bulldogs goalie Kylee Seto had six stops.

“Our backline has been holding it down and Sydney Drinkwater made a fantastic save, and that’s what we expect out of her,” said Burt of Drinkwater’s play

Sunday’s matchup saw the Owls face Southern Mississippi with a chance to move up to sixth place in the conference standings with a win.

Senior midfielder Claire Emslie started the game’s scoring in the 23rd minute after teammate Geovana Alves was taken down with a foul in the USM box. The captain took the ensuing penalty and converted it to give her team a 1-0 lead.

The Owls found the net once again later in the first half on a goal from forward Sammy Rowland. The junior received a cross from Kelsey Parry and scored to make it 2-0 in the 38th minute.

In the second half, Alves closed out the game in the 82nd minute with a goal of her own. Her team-leading seventh goal of the season came on a cross from Sophie Sanchez that she headed past Southern Miss goalkeeper Brittany Taylor, extending the FAU lead to 3-0.

“It’s why we brought her here, because she’s capable of scoring week in and week out,” Baker said.

Taylor had five stops on the day, while Sydney Drinkwater also had five saves during the clean sheet win.

“It was important, as I said Friday night, to get another shutout,” Baker said.“We’ve been kind of leaking some goals. We dodged some bullets today, southern Miss had their chances, but I think Drink[water] and the defenders did a nice job.”

FAU took 23 shots in the game while only giving up eight to the Golden Eagles.

Sophomore midfielder Maddie Pung received the lone card of the game, a yellow in the 80th minute.

The Owls will face Marshall on Friday, Oct. 16 and play Old Dominion on Sunday, Oct. 18.