How an FAU alumnus is helping solve the on-campus issue of lacking school-spirit. 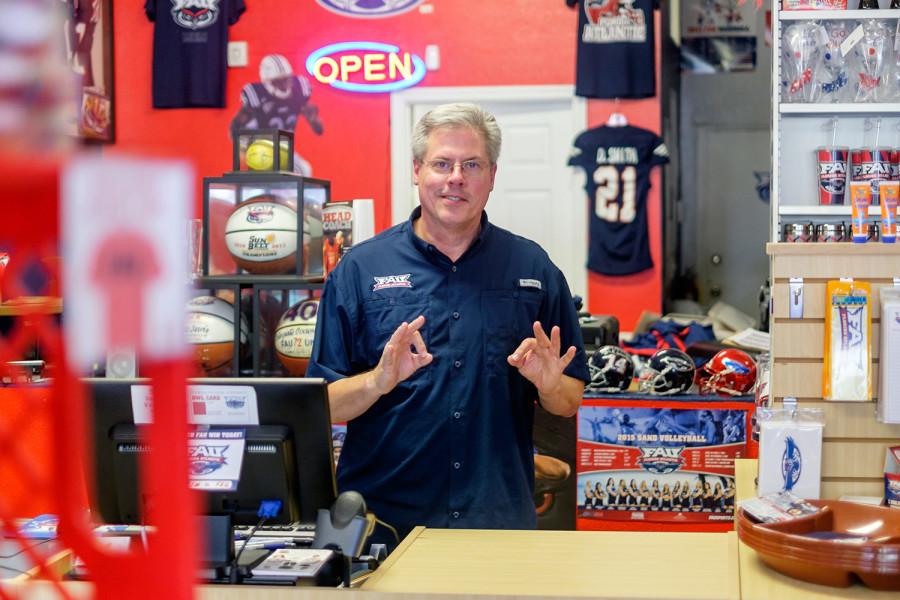 s a Florida Atlantic student back in the early 90’s, communications major Mark Noll noticed a problem on campus – a lack of school spirit.

“When I was at FAU back in the day, I would see other students wearing shirts from UF, USF or UCF, not any FAU apparel,” said Noll. “The only FAU gear available was at the store in the Student Union, and it was a small selection.”

After graduating in 1994, Noll took a job as the director of sales at AT&T for a year, and then moved on to the role of a financial advisor for Principal Financial Group. Both jobs taught him about business management and customer relationships, but they just weren’t what he was looking for.

“My past work experience in sales with a Fortune 500 company taught me that sales are all about the relationship,” said Noll. “It isn’t all about the transaction.”

So, he went out on his own and started It’s Owl Time. In the beginning, it was just a hobby. As the online store gained popularity, Noll took an early retirement from AT&T to invest more time in his business and opening a storefront.

In March of 2013, It’s Owl Time opened on Northwest 20 Street in Boca Raton – a five minute drive from the Boca Raton Campus – and is the only store in the world to be licensed and approved to make FAU merchandise.

Drew Jackson, an FAU baseball player, said, “I went in there one morning to buy some sort of FAU memorabilia for my grandparents, and there were so many things in the store that I didn’t know where to begin.”

He added, “The selection was way bigger than the bookstore’s on campus.”

Noll not only designs the merchandise on his own, but applies the designs with a screen-printing machine behind the counter. “The key thing for us, is that I try to get things that nobody else is gonna get,” said Noll. “If our competitor does one thing, I typically go a different direction.”

He is also open to hearing design ideas from customers. “The students have been just wonderful,” he said. “They come in and say, ‘Hey! You should get v-necks,’ or ‘you should get spirit jerseys.’ Things like that. And they’ll send me photos and then I’ll try to go find it and get it created.”

The connection with the university is not solely in the apparel, though. It’s Owl Time has a close tie with the success of students and is an official sponsor of FAU Athletics.

On the front wall of the store, silver signatures from FAU athletes cover the space. Customers can also donate a dollar to the Owl Scholarship Fund, a philanthropic effort by FAU Athletics to help support its athletes, and have their name on a slip of paper reading “I helped FAU win” posted on the wall by the register.

Noll also hires current FAU students, and tries to keep hours flexible so that student-employees have time for class. Junior anthropology major Daniel Young is one of those students, and has been able to balance working part-time at the store with his school work for a little over a year.

The low prices also help bring in customers. “I check the [bookstore] prices regularly, so I know our prices are better, and I offer students a 10 percent discount all the time on top of that. I try to price my items based on the students … I price [certain items] lower than they should be because I know they’re purchased more by students.”

Junior Rachel Walker has been a regular customer over the past two years. She said, “I went in there looking for a tank top that I knew FAU sold at their bookstore one time, and sure enough, he had it in the store for a few dollars cheaper.”

With the success of It’s Owl Time thus far – the store has seen a 20 percent increase in sales in the past year – Noll is excited for the future of the store and hopes its on-campus presence continues to grow.

“The best part of owning the store is being able to provide fellow alums and current students FAU merchandise that would not exist if we didn’t have the store,” he said. “It is very rewarding to hear all the great feedback from our customers.”

Aubrey Haas contributed to the reporting of this story.