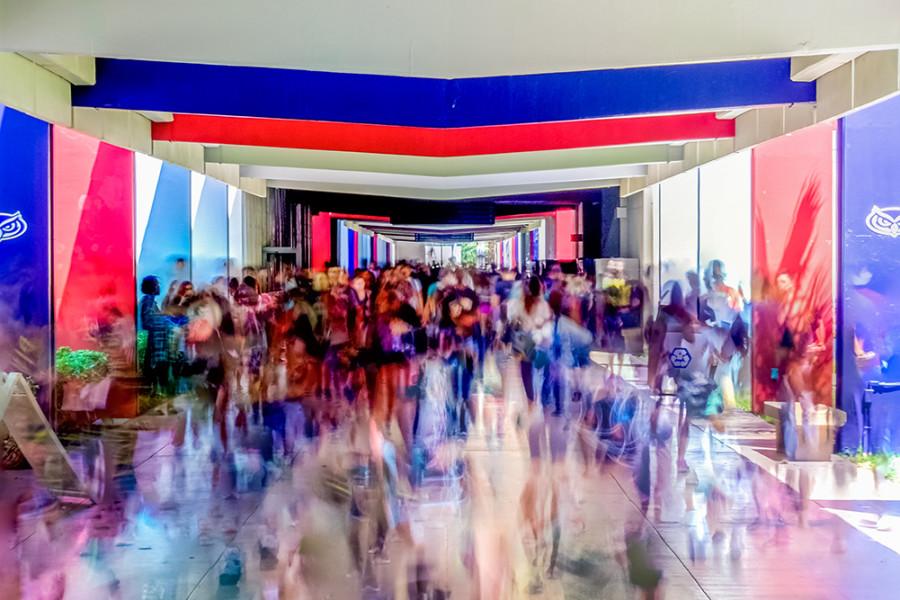 lorida Atlantic is attracting more students and just recently hosted a sell out crowd for the University of Miami game, breaking the notion that FAU stands for “find another university.”

However, the recent rise in numbers of incoming freshmen has created some unintended problems: parking, congestion on pathways and long lines for university services.

Lines snake almost outside the Starbucks around 9-10 a.m., with students waiting longer than usual to get their caffeine fix.

The 2015 freshman class is the largest since the school was founded in 1961, according to President John Kelly.

Every week the school is flooded by students commuting to and from the university.

Freshman speech therapy major Natalia Muneton is a commuter student who chose the school for its location. However, she is dissatisfied with some of FAU’s accommodations.

“The parking is too far from my classes. I have to leave from home extremely early to find a spot and make it to class on time. It can take me 15 to 20 minutes sometimes when looking for parking during afternoon classes,” said Muneton.

Rachel Harrypersad wanted to become an Owl mainly because it was convenient for her to commute to school from home. She plans on staying at FAU to complete her master’s degree and pursue her career as a journalist.

“It takes me a good 15 minutes to find a parking spot, and it’s not easy at all. I find myself following people to their cars just to get a spot. They definitely need more areas for parking,” said Harrypersad.

The university does provide a shuttle for students who need a quick ride to class, but some students aren’t familiar with the service.

“They should promote the shuttle more because I have no Idea how to use it,” said Muneton.

With the influx of freshmen, President Kelly wants to see a higher graduation rate from the previous “terrible” 45 percent reported last year. He plans on calling all future classes by the year they graduate.

This all comes as part of an aggressive recruiting plan Kelly referenced, where he is targeting students with a mean GPA of 4.0 and a minimum GPA of 3.6 to attend Florida Atlantic in 2016.

His recruiting tactic didn’t mention anything about student services or the incorporation of more shuttles to cater to the nearly full on-campus housing, at 96 percent capacity.

Kelly said the intent is not to get bigger, but to get better.

The freshman class has grown by an increase of 26.5 percent since 2005. That’s an increase of around more than 800 students, according to the State University System of Florida.

Andre Clermont, a senior English major, has seen the change with the incoming freshman class.

“I would say the 3,600 freshmen contribute to the congestion,” he said.

Clermont has seen a change in parking, too.

“Sometimes I have to leave my house an hour early now, and I live in West Boynton,” Clermont said.

Students living on campus are experiencing some ramifications to the increase in students too.

Amish Dave, a freshman on campus uses Night Owl often and enjoys the convenient golf cart ride that takes him from place to place. He routinely uses the transportation service when he eats at the campus’s Subway, which is far from his dorm in the Indian River Towers.

“They definitely need more operators to take in more calls. When I call in they don’t always pick up and I end up having to call more than once. It can be very frustrating,” said Dave.

Dave believes the problems are caused by students calling in to use Night Owl.

One policy Dave doesn’t agree with is the pick up limit of three students.

“I think they should raise it to four people rather than three, or they could have a separate Night Owl designed to pick up larger groups,” said Dave.

Dave thinks Night Owl should expand its operating days and hours to cater to the filled capacity of students living on campus.

With the rise in numbers, or at least more students seeking a traditional campus experience, it is now in the hands of the administration to see if these problems will be fixed.