Team improves to 10-4 all-time versus Golden Panthers with win. 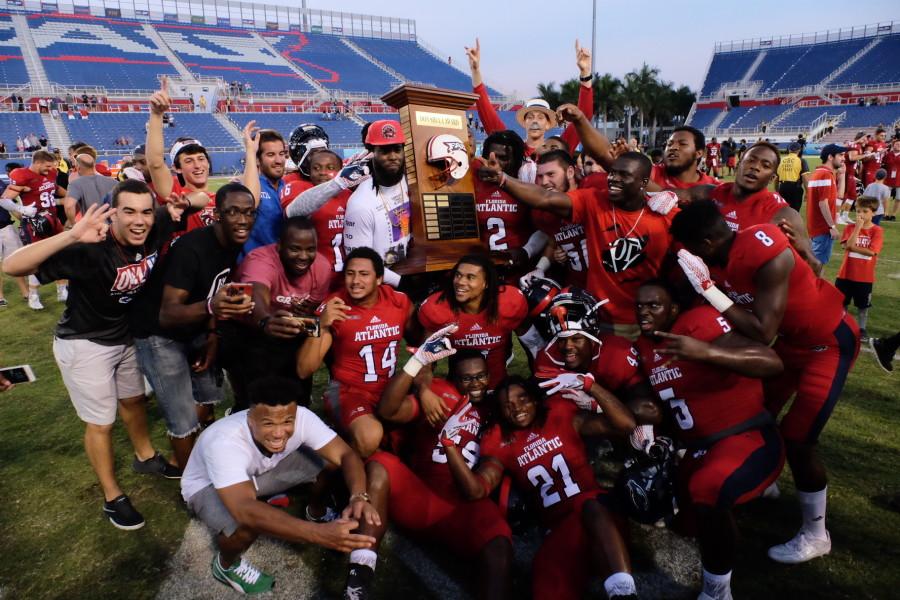 Players and Fans celebrate with the Shula Bowl after the Owls' 31-17 victory over the Florida International Golden Panthers on Oct. 31. The win was their first in the rivalry game since 2013. Mohammed Emran | Asst. Creative Director

“It feels great,” said Coach Charlie Partridge after his first Shula Bowl win. “Our kids were passionate to get that trophy back.”

FAU focused on the running game, as freshman running back Trey Rodriguez, sophomore running back Greg Howell, and redshirt-senior quarterback Jaquez Johnson gave the Owls a three-headed rushing attack. The trio combined for 223 of the team’s 245 total rushing yards on the night.

“Our offensive line came out with a different look in their eyes,” said Johnson. “They were moving [FIU’s] defensive line. We could run the ball no matter what pressure they brought.”

Rodriguez finished the game with 94 yards on 20 carries and two touchdowns. He also added 46 yards of receiving. Howell had 13 carries for 59 yards of rushing.

Rodriguez said he got into more of a rhythm in the second half, as he started to gain the majority of the carries after splitting them with Howell in the first half.

“One of our goals for this game was to continue to move the chains; establish the running game,” said Patridge. “What’s fun for me was hearing out offensive line come off the field and tell [us coaches] ‘we can run the ball.’”

The Owls’ offense successfully made it to the FIU side of the field on every possession they had. They converted seven out of 13 third-down opportunities in the game while also converting on two fourth-downs during the fourth quarter.

“That’s a moment in the game where I said ‘alright, our kids are starting to grow up here,’” Partridge said.

After failing to score from the the FIU two-yard line on the opening drive of the game, Owls’ freshman Azeez Al-Shaair and Hendrickson combined to sack FIU quarterback Alex McGough on the Panthers’ first drive. The sack forced a fumble and was recovered by redshirt sophomore linebacker Nate Ozdemir.

FAU’s defense finished the game with seven sacks and 262 yards allowed. Hendrickson and redshirt freshman Hunter Snyder accounted for 2.5 sacks each. Hendrickson’s 2.5 sacks gives him 7.5 on the year, placing him in a first-place tie for FAU’s single-season sack record.

“[Hendrickson] continues to mature in so many ways…and that’s carrying over to his play on the field,” said Partridge.

“[Tying the record] is pretty awesome,” said Hendrickson. “It makes me want to work harder this week to [break the record] next week.”

With the Owls up two touchdowns in the fourth quarter, freshman defensive back Jalen Young closed out the game with a 58 yard interception return for a touchdown.

McGough – who entered the game coming off of a 390 yard, three touchdown performance last week against Old Dominion -was held to 196 passing yards on the day.

Johnson completed 10 passes for 113 yards for the Owls. He also ran the ball nine times for 64 yards.

According to Partridge, “it was predetermined that [Driskel] was going into the game, regardless” of how the game played out, to make sure he was ready in case Johnson’s ankle was unable to hold up.

Johnson has missed three games this season due to an ankle injury. He re-entered on the Owls’ next possession and remained the quarterback until the end of the game.

“I felt great,” said Johnson. “It felt good to be able to be myself again.”

Driskel ran for a six yard touchdown during his lone drive on the field and was a perfect 6-for-6 on completions, passing for 55 yards.

After the final whistle, the Owls sprinted over to the southeast corner of the stadium, where the trophy was located. Johnson said the team had spent some time during Thursday’s practice rehearsing the run over to the area.

“It feels great to be 2-1 against FIU; and go out on top,” Johnson said after winning his third and final Shula Bowl.

The Owls’ next game will be played at Western Kentucky on Saturday, Nov. 7 at noon.

Brendan Feeney is a contributing writer for for the University Press. To contact him on this or other stories, he can be reached at [email protected] or on Twitter.