FAU ranks No. 31 on a list of the top 50 most diverse schools by the Best College Reviews website. 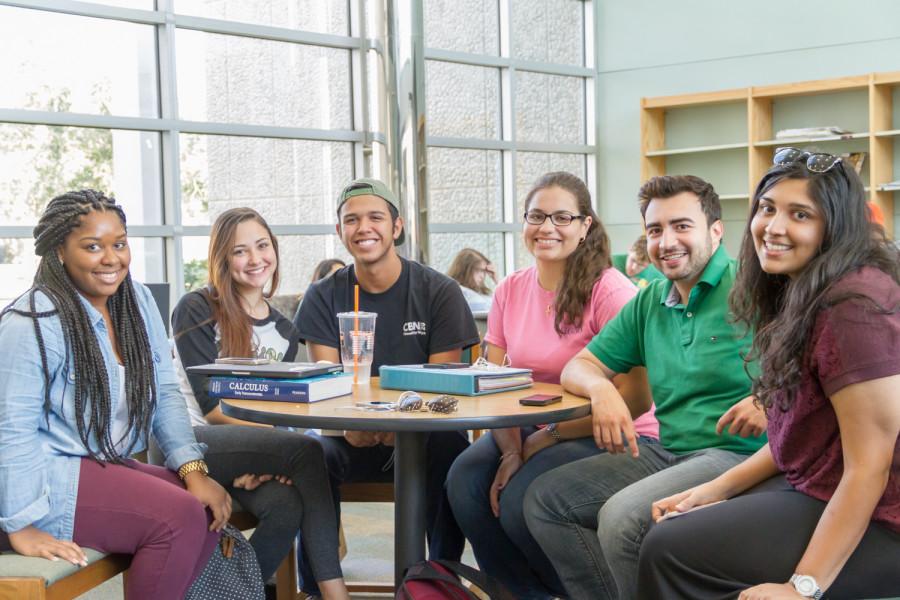 Students pose at a table in the library. Andre Gore | Contributing Photographer

ith 52 percent of the student population being of minority cultures, according to the 2014-2015 Data Set, Florida Atlantic is a melting pot of different races, cultures and beliefs.

This has landed it the No. 31 spot on Best College Reviews’ list of the top 50 ethnically diverse colleges in America.

FAU ranked in the middle of two other Florida universities, with St. Leo’s University ranking at No. 36 and Nova Southeastern University coming in at No. 8. Swarthmore College took the No. 1 spot.

“FAU has demonstrated the importance of diversity and global perspectives by including diversity within its strategic plan known as ‘The Race to Excellence,’” said Assistant Vice President of Student Affairs Andrea Guzman Oliver, EdD. “We have been a long standing [Minority Serving Institution] and recently have met the enrollment requirement for a [Hispanic Serving Institution].”

Diversity has become a celebrated element of the university.

Senior general studies major Jordan Paul said, “Honestly, I think it’s really cool that our campus is so diverse … I think that our school benefits from it.”

The Office of Diversity and Multicultural Affairs works to encourage acceptance by bringing in tools such as Campus of Difference, a training program designed to “enhance the university’s ability to build a stronger community and make proactive changes regarding the challenges faced on our campuses,” according to the official ODMA website.

ODMA is also responsible for hosting events and presentations throughout the semester that promote diversity.

“The Division of Student Affairs is in constant collaboration with Multicultural Programming Board, Housing and Residential Life, Fraternity/Sorority Life, COSO – just to name a few – in order to offer rich and diverse educational programs that are also entertaining and fun for students,” said Oliver.

The office works to bring together students who have learned more about diversity and the role it plays on campus.

Sophomore Blake Bonnie said, “I think it’s pretty cool that you can sit in a classroom of people from different parts of the world … and they can share stories about their culture. It gives you a different perspective on everything.”

Freshman neuroscience major Gigi Reglas agreed, saying, “We meet a lot of new people. I came from a really small school, it was in Miami, but it was still not diverse at all, so coming here it’s been a lot better than what I experienced in the old school.”

This ranking has helped solidify FAU’s efforts to become a more diverse and inclusive university. “We strive to bring awareness to all facets of diversity beyond race/culture (this includes ableness and disabilities) and look for opportunities to highlight intersectionality,” said  Oliver. “The idea that we are all unique and diverse.”