Old Owl in a New Place

First joining in 2000 as a player, running backs coach Jared Allen has become the longest tenured Owl in his return as a coach. 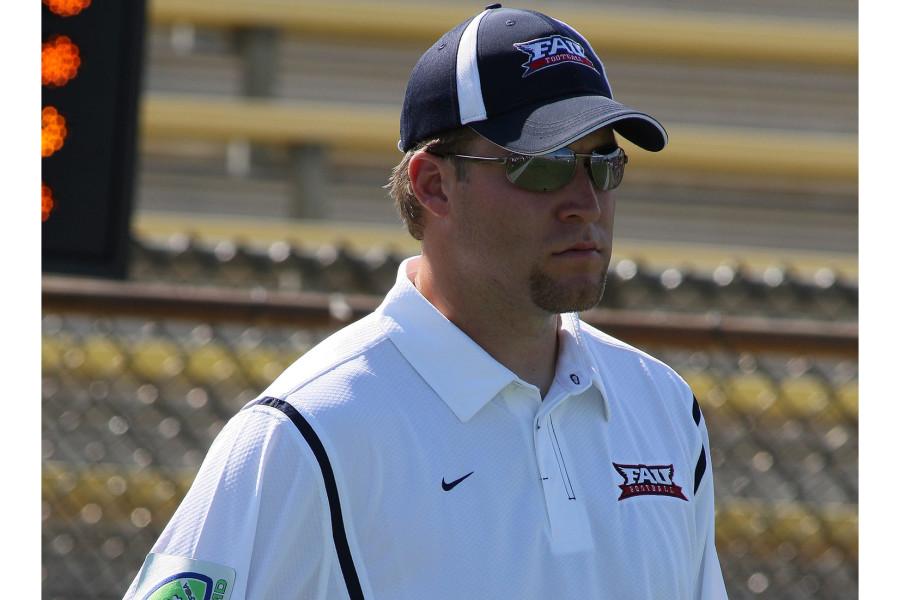 Allen Jared got his start in coaching as a graduate assistant in 2009, working his way up to become the team’s running backs coach. Photo courtesy of FAU athletics.

A name that is a little harder to remember is Jared Allen. Make no mistake. Despite the low profile, the current running backs coach has left his mark on the program’s timeline by the fact he has spent the most time as an Owl.

Going into his 12th year as a part of the program, Allen is the longest tenured member of the football program. He has been around for each of FAU’s four head coaches (Schnellenberger, Carl Pelini, interim coach Brian Wright and Charlie Partridge) and is the first player in school history to become a coach after playing for FAU.

“I feel fortunate to be part of this program,” said Allen. “It’s a blessing. I got to see it grow and mature, while getting to stay here for so long. I’ve gotten to work under the man who coached me and also worked in the staff of both coach Pelini and Partridge.”

Allen’s path to Boca Raton started on Aug. 26, 1981 in Edmond, Oklahoma.  Born into a middle-class suburban home, he grew up in a community that instilled many of the values he used throughout his own life. “It was a real midwest feel of a suburb,” Allen reminisced.  “Really close knit and lots of families there. I really loved it.”

With two older brothers, he had more than enough reason to get involved in sports, playing both football and basketball as a kid.

“My brothers were really my inspiration to play from an early age. They always got me involved,” Allen said. “Oklahoma was always a big sports state, especially with football.”

After racking up multiple all-state and all-city honors in his final two years at Edmond Santa Fe High School, colleges began to take notice of the quarterback, including the University of Nebraska.

When many bigger schools ended up going in other directions, Allen had no clear image of where he was supposed to go. That was, until he took a recruiting trip down to Boca Raton.

“The trip was actually the first time I was ever in Florida,” Allen recalled. As time would tell, it certainly would be far from the last.

Schnellenberger knew that Jared Allen would be a pivotal piece to the first-ever Florida Atlantic football team. The first head coach of the program was staring down his initial season without a quarterback at the helm.

“We already had two quarterbacks in Florida we wanted to sign,” said Schnellenberger, famous for coaching the Miami Hurricanes to the 1983 national championship. “But when it came time to select players, Jared [Allen] became available. He was supposed to go to Nebraska, but ended up falling into our lap after they didn’t sign him.”

Allen figured the sunshine state would be his destination after talking to coach Schnellenberger during a visit to the Boca Raton campus. “The vision coach Schnellenberger painted sold me on FAU,” he said. “Coach spoke of being part of something big and making history, which my family and I could get behind. I was sold.”

After redshirting his first year, Allen was thrown into the fire. He was tasked with leading the team in his freshman season, which forced him to adjust and take control of the whole team’s offense.

Allen said his first year “was definitely a different experience, with everyone being so young and with so little experience at the college level.”

“It was tough facing that and being so far from home,” he continued. “It kind of forced me to mature and be a leader earlier than I would have.”

After going 6-15 in their first two years, the team started to find its stride under Allen’s leadership. In 2003, the Owls went 11-3 and made the Division I-AA playoffs for the first time in program history. That record still stands as the most wins in a season for FAU football.

“He was hand picked to fit into the offensive system I ran with all my teams,” said Schnellenberger, who coached Allen from 2000 to 2004. “He was a high quality talent who could beat the big schools and win the important games.”

After being invited to the NFL Combine and going undrafted, Allen signed with the Tampa Bay Buccaneers in 2005 as an agent. He hoped that a strong showing at camp would get him on to the final roster.

Despite his efforts, Allen was unable to pass the second-to-last round of cuts that year, even while being named the MVP of rookie minicamp in the months before.

“I had a good rookie camp, but coach [John] Gruden wasn’t able to get me a high amount of looks during practices. I was actually cut once and brought back, but in the end they were looking for a more experienced backup.”

The following year, Allen once again signed with Tampa Bay to try and make it. After making it all the way to the final preseason game for the second time in a row, he was cut again.

But, Tampa found a place for him to play. They moved Allen to the Amsterdam Admirals of NFL Europe, a minor league for the NFL overseas.

“It was rough,” Allen remarked on trying to find a place to play. “I was hoping to get another chance to make it, and luckily I did in NFL Europe.”

Allen found himself in the role of backup quarterback for the first time in his career. In a completely new environment, he worked to make an adjustment to both his surroundings and the professional game.

After starting the final three games of the season and the World Bowl playoff versus the Frankfurt Galaxy, Allen came to realize that responsibilities to his growing family were much more important than trying to pursue his dreams.

“I still was working out around this time to get ready for the season, but after I was without a team at the end of camp, I saw the writing was on the wall to move on. My wife was pregnant and I knew that she would be unable to travel to Europe if I was sent back there.”

Allen moved back to his home state to take a job with RX Medical, signaling a new period of his life.

“I had found a job in medical sales back home in the Oklahoma City area, so I moved back and started working there,” he said. “Jacksonville offered me a spot on their practice squad around that time, but at that point I had already taken the job and decided I was done.”

Allen was far from done with football altogether. While back home, he began working with young quarterbacks in camps, as well as starting a camp with his brother Jason called the Top Gun Challenge, which still exists today under different leadership. Around 2008, he decided to make a call back to his former coach at his alma mater.

“I was talking to coach [Schnellenberger], and for a few months he tried to sway me from making the decision to move from where I was. But in 2009 he gave me the opportunity to come back as a graduate assistant and get my start back on the field.”

Once again, Allen was on the move back to Florida. This time, he had a wife and child in tow, with another on the way.

“I saw him with the possibility of being drafted, of playing in the NFL and winning a championship, but that didn’t pan out,” said Schnellenberger. “But with all that professional experience that he built up, he had become a great coach, and that’s what made me want to bring him back to campus.”

Most of the people Allen played and coached with saw this coming. “Jared certainly had a deep knowledge and love for the game, that was apparent,” said Gibran Hamdan, Allen’s teammate on the Admirals. “He was also a strong leader and positive force in the locker room, which I’m sure is still apparent today.”

“But most of all,” Hamdan added, ”the trait that serves Jared to be a tremendous coach is his trustworthiness. He is just one of those guys you can trust to make good decisions, be honest and look out for the best interest in those around him. I can think of no single qualification more important in today’s atmosphere than to have a coach that players, parents and programs can trust.”

Allen welcomed a third child to his family in 2013. When not on the field, he devotes most of free time to them.

“I’m trying to get into fishing so we can do that together,” he said. “I coached their flag football team on Sundays. It can be tough, it gets stressful when I’m coaching.”

While many have left a temporary impact on the program, Allen’s continued presence is something special the program has never seen before.

“I hope my legacy has been first as a founder,” Allen said. “As one of the first people to believe that football was possible here and create a foundation on which to build. As a coach, I hope that I can continue to improve the program, but at a national level. Whether I’m a position coach or end up in a higher role, that’s my goal no matter what I do.”

Allen’s earned the support of at least one big name.

“He’s worked his way up,” said Schnellenberger. “ With his success, I think that he could end up as a head coach or coordinator somewhere.”