New Greeks on the block

Recently chartered fraternity Pi Kappa Phi is making a name for itself on campus with its acceptance of diversity. 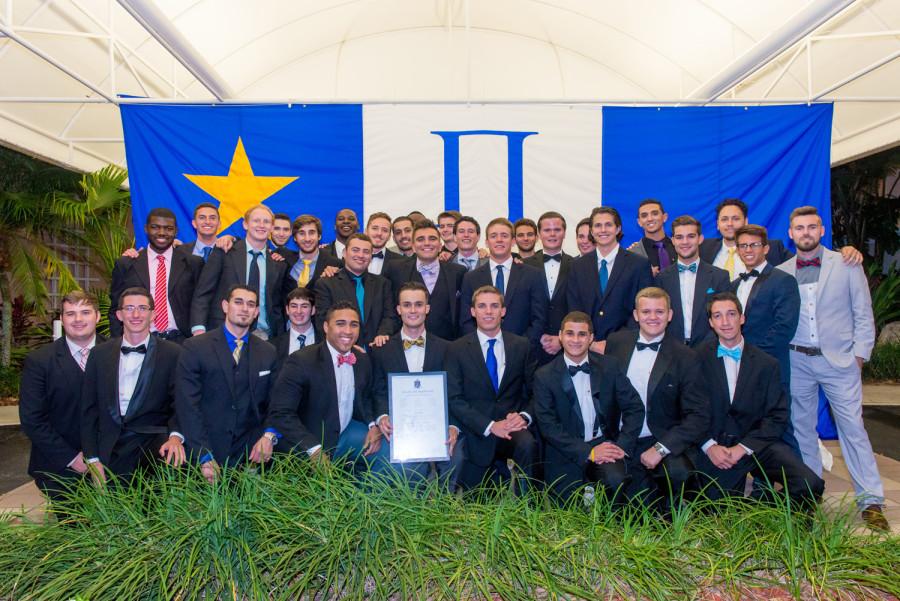 The founding members of Pi Kappa Phi’s Kappa Delta chapter at their chartering event in April. Photo by Max Jackson.

uilt on the concept of a “Nu Phi,” meaning “non-fraternity,” today’s Pi Kappa Phi brothers continue to embrace this philosophy.

“They didn’t quite fit the classic ‘frat boy’ stereotype,” said member and sophomore political science major Seamus Maloney. “It was, and is, a group of independent men with different interests, ideas, personalities and backgrounds, rather than being full of guys who joined a fraternity because of what they had seen in TV or movies.”

They charted at Florida Atlantic in April 2015, becoming a nationally recognized chapter and the most recently initiated fraternity at FAU under the Interfraternity Council (IFC).

The Kappa Delta chapter prides itself on its attempts to break the mold of the stereotypical fraternity by welcoming brothers of all backgrounds – notably those who are gay or disabled – and working towards their national philanthropy effort.

“It is great to see Pi Kappa Phi become a chartered fraternity,” according to an email sent from the IFC. “The mission of changing the fraternity stereotype is a great concept, because it allows students who are discouraged by stereotyped fraternities to experience Greek life and see what it is really about.”

Campus Pride, a website dedicated to covering LGBTQA culture in college, listed Pi Kappa Phi as a fraternity that is “taking the lead through policy and practice” as part of their Lambda 10 Project – a program that found Greek life organizations that are accepting of the LGBTQA community.

“Here, people of all races, religions, ethnicities, abilities, sexual orientations, HIV statuses and other protected classes contribute to the collective achievements of our nation and our universities,” states the Pi Kappa Phi website.

It took a year for the Kappa Delta chapter to charter, during which they went through two presidents before landing on Evan Camejo, who got them to the end of chartering.

Camejo reflected, “Our biggest difficulty has been staying cohesive and motivated to continue; we’ve been through a lot of adverse situations but have finally come out on top.”

Now, the brothers are set on embracing the diverse young men it brings together, and sharing their philosophy of acceptance and service around campus.

This includes accepting brothers who are a part of the LGBTQA community – something that is seen among Greek life more often.

FAU alumnus and member of Sigma Alpha Mu Terrence Hood came out to his brothers as gay in 2007 and received nothing but support. And while he believes the acceptance of diverse members has become more “mainstream” over the years, he notes that there are still “barriers in the community.”

“We like to think that we are ahead of the curve by having different kinds of men in our fraternity,” said current president Josh Shorey. “In 10 to 15 years from now, we can look back and be proud that we were one of the first organizations accepting those of different sexual orientations.”

Sigma Phi Epsilon recently received praise as its National Board of Directors opened membership to those who identify as transgender, reported Total Frat Move – a website dedicated to writing about all topics related to fraternity life.

Member of Pi Kappa Phi and Boca Raton Campus Student Governor Chris Ferreira said, “That’s one of the ways we bring a different thing to the table and allow people to kind of be more inclusive and learn about things from other people’s perspectives.”

Maloney added, “When you exclude certain types of people, you are losing out on that much more ideas, creativity, knowledge, experience and a myriad of other qualities that can help the fraternity excel.”

Philanthropy is also a big part of being a Pi Kappa Phi.

“We set ourselves apart from the rest in how we give back to the community. We don’t just write a check, we aim to create relationships with those we serve,” said Camejo, who served as a crew member in the fraternity’s national philanthropy, the Ability Experience’s 2015 Journey of Hope – a cross-country bike trip that includes stops to raise awareness for those with disabilities.

The group has also worked with other special needs organizations like ScentsAbilities – a candle company that helps those with special needs learn skills to be independent – and Best Buddies – a nonprofit organization that brings volunteers and people with intellectual and developmental disabilities together.

Throughout the year, the fraternity has participated in events like “Pie a Pi Kapp,” “Spread the Word” – which promotes banning the use of “the ‘R’ word” towards those with mental disabilities – “The Pedal Experience” – where brothers biked in place to raise money – and have also done push-ups for donations.

Along with these efforts, they also participate in the disability dinner hosted by the Office for Students with Disabilities.

Aaron Sherman, a junior public management major and director of Students Advocating Volunteer Involvement said, “You know you’re raising money for a good cause and you know it’s going to a good cause because you see the results.”

The brothers of the Pi Kappa Phi Kappa Delta chapter are proud of their accomplishment and have gained credibility among the FAU Greek community.

Thomas De Maio, president of FAU’s Delta Tau Delta chapter, spoke well of the fraternity. “I think the gentlemen of Pi Kappa Phi are really nice guys and are making a good name for themselves on campus. It’s never easy starting up a fraternity, it takes a lot of dedication and leadership. I have a lot of respect for the Pi Kapps on campus.”

Sherman said, “We all put blood, sweat and tears into this.”

He continued, “It is definitely a once in a lifetime thing saying, ‘I started this chapter. I’m one of the original people from this chapter.’ It’s cool to say and it’s cool being a part of this lifelong brotherhood.”

Camejo hopes that the group stays unified and “challenge the process.”

“There are too many times where fraternities and sororities fall into a stereotype, I would love to look back and say we changed those views.”