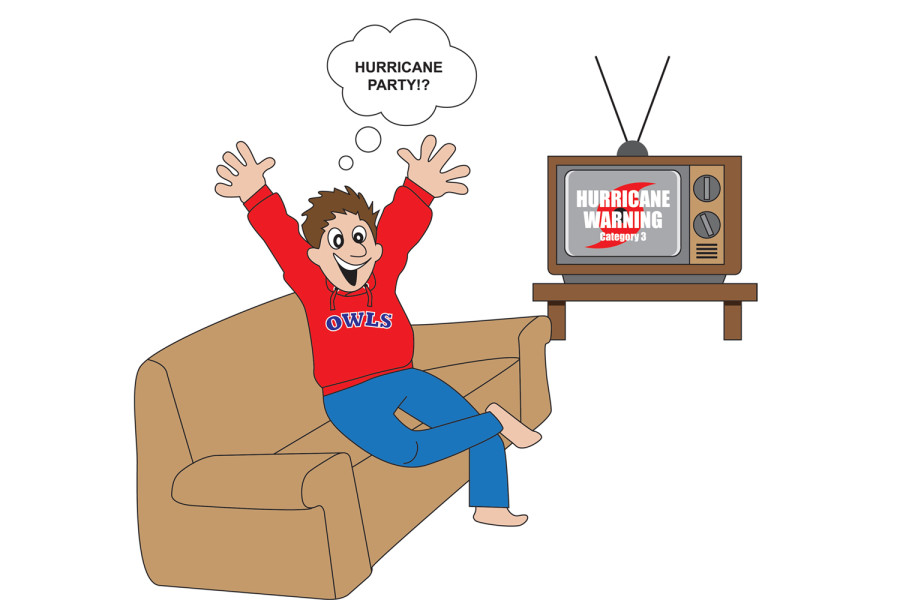 tudents are experiencing amnesia from a decade free of any major hurricanes, forgetting the amount of damage these monster storms can cause.

South Florida hasn’t experienced a category three hurricane or higher since 2005, according to the National Oceanic and Atmospheric Administration.

“I’m not really worried about a major hurricane hitting because most hurricanes seem to always just miss us,” pre-med major Melissa Ramirez said.

If Florida manages to evade another major storm this hurricane season, it will uphold a 10-year streak free from a disastrous tropical cyclone.

Sports management major Christian Correa from Greenacres, Florida, has lived in the state since early 2005. He agrees with Ramirez and doesn’t believe a major hurricane will hit this season.

However, both Correa and Ramirez say there’s always the lingering thought in the back of their minds that they may be wrong, and don’t want to rule out the possibility of a massive hurricane.

Tropical depression Erika was the closest to raining on Florida’s hurricane free parade so far, but more super storms are predicted to form in the tropics throughout September, October, and November.
Should we still be worried?

FAU is close to the water and is more likely to experience stronger, powerful and more destructive winds.

The campus is minutes from the beach. FAU stadium is prized for the ability to offer views of the crashing waves from the top bleachers, but one of the school’s top selling points can be a downside when discussing hurricane possibilities.

The state building code requires that structures within the “wind-borne debris region” on the coast must withstand winds at speeds of at least 140 mph. Palm Beach County falls into this region, according to the county planning, zoning and building department.

Despite the school meeting the codes, a major hurricane could still potentially have serious consequences for students both attending class and living on the Boca Raton campus if a major storm were to hit, like category three hurricane Wilma did 10 years ago.

In 2005, FAU suspended class and day-to-day operations for about three weeks because of Wilma, and cost the school about $7 million in damages and clean up, according to Bastias.

Wilma tore off the roofs of buildings, tossed signs and trees across campus and inflicted window and ceiling damage from incoming debris.

“There is potential for a lot of damage to occur,” National Weather Service meteorologist Chuck Caracozza said.

Caracozza said that a category three hurricane could cause considerable damage to both homes and buildings. Power would also be knocked out for an extended period of time.

“A hurricane can be very costly to lives, buildings, and city infrastructure . It’s not just about FAU. A hurricane would devastate the community. It hurts everyone immensely,” said Bastias.

FAU president John Kelly has the final say in deciding whether or not an incoming superstorm is serious enough to call for a school-wide evacuation through FAU Alerts. FAU Alerts informs both students and professors about the storm and evacuation through FAU email, sms messaging, weather sirens and indoor mass notification systems, according to Bastias.

“We are constantly monitoring these storms and communicating with the national weather service,” said Bastias. “We pay close attention to the hurricane wind speeds.”

While there are no shelters on campus, students living on campus are encouraged to go home and take shelter from the storm if evacuation is required. Transportation to community shelters like red cross would be provided to students far from home by the university through housing and residential life who don’t have anywhere to go.

Correa has family in South Florida and says he would head straight home if news broke that a major hurricane was on a collision course with the state.

“I would want to be at home with my family and make sure they were OK. I would do what I could to help in any way possible,” said Correa.

When Wilma came through in 2005, professors like Kevin Petrich  lost valuable learning time with students. Petrich was forced to give alternative assignments in place of his hands-on style of teaching in his class room.

“I get worried because I know there is no way that I can hope to replicate the experience in my broadcast journalism class,” said Petrich. “It really throws our schedule off.”

Petrich has witnessed his fair share of hurricanes firsthand.

“I have a sense that students and a lot of other South Floridians after 10 years have become complacent again where hurricanes are concerned. That is a concern of mine,” said Petrich

The last major hurricane to hit caused $16.8 billion in damages and took five lives according to the National Weather Service Hurricane Center. These cyclone giants are not here to play around and will destroy everything in their path.