Despite eight fumbles, FAU relied on forcing turnovers for first win of the year. 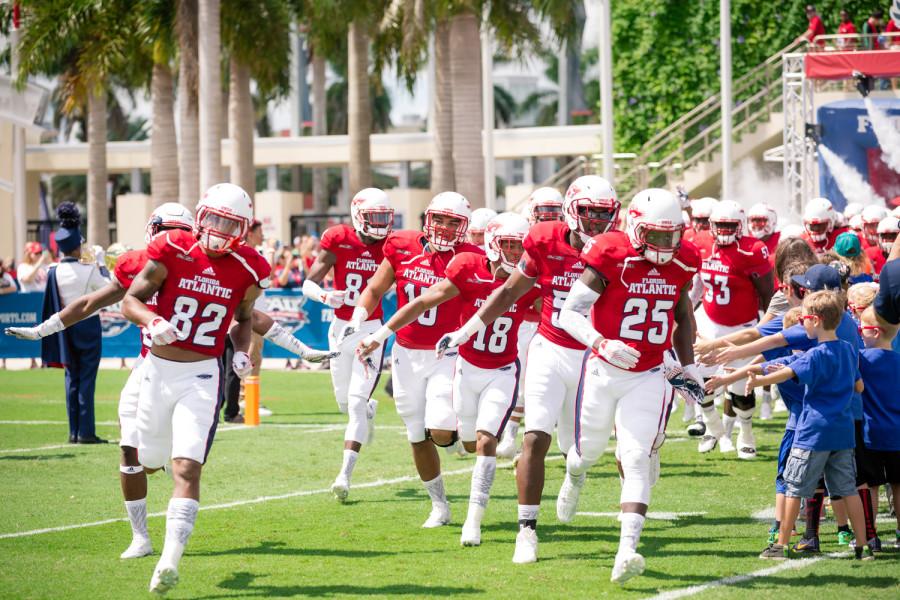 Florida Atlantic players high-five fans as they make their way on to the field at the start of their game against the Buffalo Bulls on Sept. 19. The Owls earned their first win of the season this Saturday, beating the Charlotte 49ers 17-7. Brandon Harrington| Photo Editor

Josh Talero, Contributing Writer
rainstorm didn’t make it easy for Florida Atlantic to hold onto the football Saturday night, as the team began conference play against the Charlotte 49ers in Charlotte, North Carolina. With help from its defense, the Owls beat Charlotte 17-7, securing their first win of the season.

FAU’s defense continued to show improvement from past weeks, as they were able to hold Charlotte to 206 total yards and force seven turnovers in the victory.

Freshmen on the defensive side of the ball were a major factor in that performance. Linebacker Azeez Al-Shaair led the team in tackles with nine. Safety Jalen Young contributed with an interception, while defensive back Ocie Rose had two.

Owls quarterback Jaquez Johnson made his return to the starting lineup this week. He sat out last week versus Buffalo with an ankle injury that he suffered in the Miami game, and was probable at game time.

Johnson needed the game’s first two drives to shake off the rust before leading FAU’s offense to its first points of the night on an 18-yard touchdown run. Johnson finished the game going 14-for-25 on passes, with 144 yards and two interceptions.

Ball security continued to plague FAU, as the offense fumbled five times in the first half and eight times by the end of regulation. Despite putting themselves into danger, the team only lost three of the eight fumbles. The Owls eclipsed last season’s turnover margin of 12 during the game, with 15 in the past four games.

Charlotte quarterbacks Lee McNeill and Matt Johnson were unable to get comfortable throughout the entire game, collectively throwing six interceptions. McNeil threw four of those turnovers.

Defensive back Sharrod Neasman and safety Young had the two interceptions in the first half, helping lead the team to a 10-0 lead at halftime.

As the rain continued, FAU’s defense began the second half similar to how they began the first – by forcing Charlotte’s offense to commit a turnover. This time it was Cre’von Leblanc who intercepted McNeill and returned it to Charlotte’s 28-yard line.

FAU’s offense was unable to capitalize on the field position yet again as tight end Tyler Cameron fumbled five yards from the goal line with 9:49 left in the third quarters. The fumble was FAU’s sixth of the evening.

With 10:58 left in the fourth, Jaquez Johnson threw his second interception of the game, the ball slipping through sophomore receiver Nate Terry’s hands to Charlotte defensive back Tank Norman. Norman returned it for a 28-yard touchdown to bring his team within three, 10-7.

The touchdown was the fourth time in two weeks that the opposing team scored without FAU’s defense on the field.

Despite the offensive struggles, FAU’s defense came up with another big play late in the game as LeBlanc caught his second interception of the night, when Charlotte was attempting to stage a comeback.

Despite LeBlanc’s late interception, the team continued to struggle capitalizing on the defense’s play when kicker Greg Joseph missed a 36-yard field goal with 4:15 left in the game.

Down 10-7, Charlotte had a chance to control the game in the final two minutes. But freshman Rose returned an interception for a touchdown to close out the Owls’ win and prevent the 49er comeback. The freshman’s first career score stretched FAU’s lead to 17-7.

With the win, the Owls (1-3, 1-0 C-USA) broke an eight-game losing streak as well as an eight-game road losing streak. The win was Charlie Partridge’s first on the road as head coach at FAU. The 49ers fell to 2-2 and are now 0-1 in conference play.

The Owls will have a bye in the upcoming week with their next game at home against Rice University (2-2) on Oct. 10.

Josh Talero is a contributing writer for the University Press. To contact him on this or other stories, he can be reached at [email protected] or on Twitter.