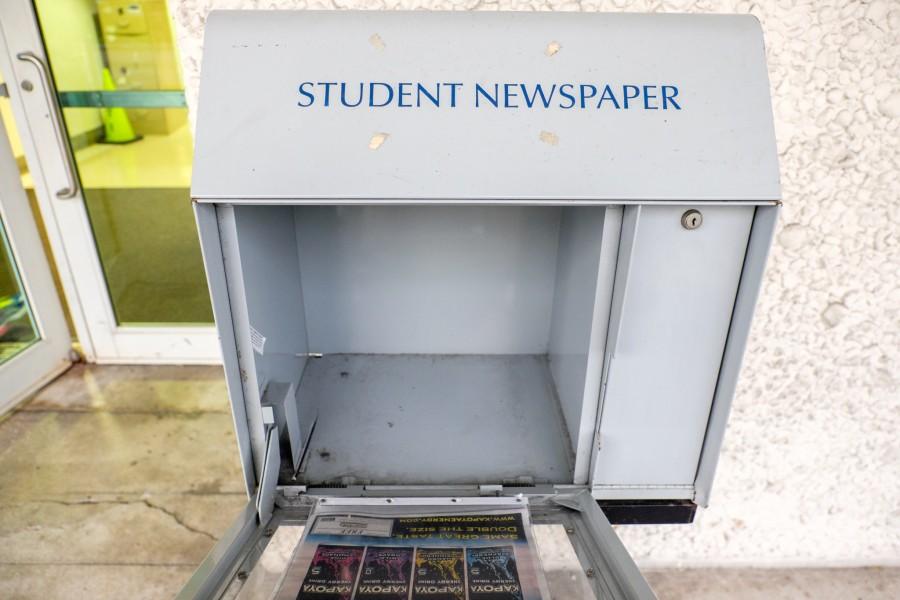 Last week, thousands of copies of the UP went missing — but they weren't hard to find. Mohammed F Emran | Staff Photographer

p and down FAU’s Breezeway, bins that should’ve been filled with hundreds of issues were stark empty a day after they hit stands. But Room 106 in the Engineering East building was stuffed with thousands of copies one day later.

The UP’s football issue is one of our most popular papers of the year. It was sophomore Sports Editor Ryan Lynch’s baby, he wrote nearly all of it.

But many readers didn’t even get the chance to snag a copy. Virtually overnight, all those issues had been taped and twisted into newspaper bridges for a fundamentals of engineering class project.

And it’s not the first time.
Some Background
Our issues hit stands every other week on Tuesdays. By 4 p.m. Sept. 1, they were all distributed. By 6 p.m. Sept. 2, they were gone.

As the day progressed and our staff noticed more bins completely emptied, my news editor had a lightbulb moment. “An engineering student came by yesterday and asked if he could have a bunch of papers,” he remembered. “I said no. He said it was for an engineering project involving a five foot bridge.”

Behold, a clue. The past few years, FAU has offered fundamentals of engineering, a class involving a fall project where students build bridges out of newspaper. Apparently, it’s been a problem before.

“I was in the process of writing a column when an engineering student came to the newsroom and explained everything and apologized,” said former Editor of the UP Mariam Aldhahi. Aldhahi was the editor in 2012 when one week, bins started emptying a little too quickly.
What’s Different?
When it happened in 2012, it was a couple hundred issues. This week, it was more like a couple thousand. Almost 2,500 issues went out and virtually all of them went missing within a 24 hour period (minus a stack inside the gym and a few near the dorms and the Arts and Letters building — I guess engineers don’t work out).  With bridge projects due Thursday, Sept. 3, we knew where to look.
The Confrontation
I visited the College of Engineering Dean Mohammad Ilyas’ office twice that Thursday. The first time, his assistant Gina Seits greeted me. I was joined by the UP’s faculty adviser Neil Santaniello. We told her the situation and our reason to believe engineering students were behind it.

She genuinely seemed to be concerned and gathered both of our phone numbers and email addresses. It was around 11 a.m. and she said that Ilyas was “unavailable,” but would reach out to us as soon as possible.

Next, we found Professor Tsung-Chow Su, the current leader of the bridge-building initiative. After explaining to him the circumstances, he immediately blurted out “I told them not to take the UP.”

We then asked him if there was any chance of recovering the stolen issues. Su told us no, because the final presentation was at 1 p.m. that day, which he encouraged us to attend. We asked him if there would be any recourse if we proved issues were stolen. “I’m sorry,” was his only response. From there, a police report was filed. The FAU police officer agreed that this was in fact theft, and said she remembered seeing this happen with the engineering department before.
The Cold, Hard Evidence

Walking into EE 106, I thought to myself, “maybe these engineering students were clever and covered the UPs with other publications. Maybe they just used our copies for interior.” Boy, I was wrong. So, so wrong.

Newspaper bridges lined the class — many consisting only of our football issue — waiting to test their fate (books would be laid on the bridges until it collapsed).

Su was at the front of the class, too.

As my adviser and I approached him, he smiled. I asked him if he really told his students not to use the UP. “I told them twice,” he responded quietly.

“Well, they didn’t listen,” I said, gesturing a bridge right in front of us that had multiple copies of the UP’s cover staring back at us. “So will they face any repercussions since they didn’t follow your instructions?” I asked Su. He responded using his favorite catchphrase, “I’m sorry.”

Su invited me to speak to his class and essentially lecture them for using our papers. I declined and headed to the dean’s office — again.

Greeted again by Seits, my adviser and I told her we had hard proof that the missing issues were connected to the engineering department. She informed us the dean was still “unavailable, but he is aware of the situation and working on a solution.”  Six days later, I still haven’t heard from Ilyas, and neither has my adviser.
Aftermath
Professor Tsung-Chow Su apologized to me at least five times last week, but none of his ‘I’m sorrys’ meant as much as one of his student’s.

Hours later that Thursday, sitting in the newsroom, an engineering student knocked on the door. He told me that he took his entire bridge apart and counted 100 issues and wanted to pay me for them on behalf of his group. He apologized profusely and said that he didn’t think to ask where his group-mates got the newspapers. I refused his offer. I’m also refusing to name him in this recount because I don’t want his money — I don’t want a single student’s money for an action condoned by their professor.

Having happened before, this is more than a student-to-student problem, this is a departmental problem. And it’s not an accident anymore. “I’m sorry” isn’t going to cut it.

If you weren’t able to snag a copy of the UP’s football issue before they were all taped into bridges, you can read the digital version here:

View all our publications on at issuu.com.