Giving you what you missed and what's coming up this week in Owls Athletics. 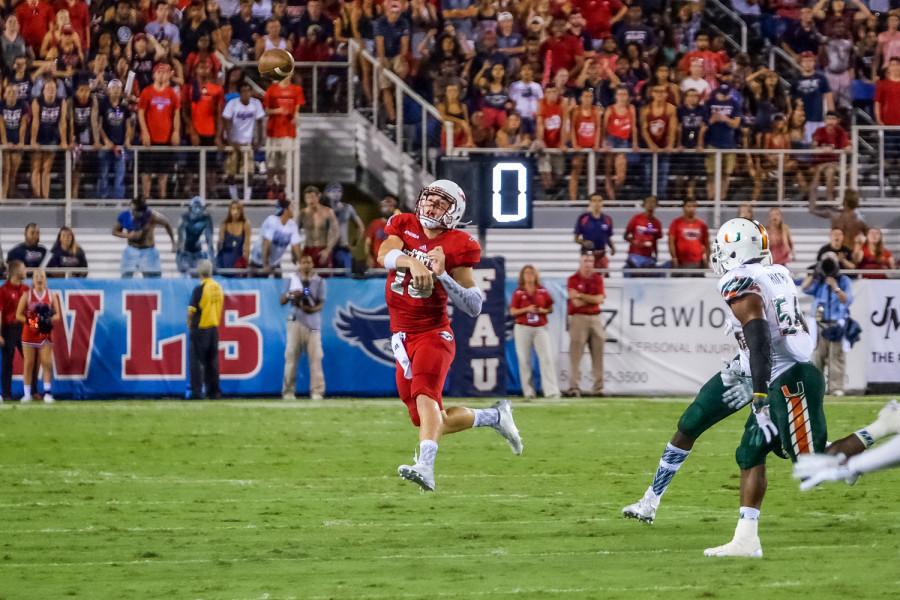 Redshirt freshman quarterback Jason Driskel throws a pass during his first career game playing as an Owl Friday night versus Miami. Driskel was brought into the game after starting quarterback Jaquez Johnson suffered an ankle injury in the first quarter. Mohammed Emran|Staff Photographer

Scores from this week

The team is off to its best start in program history after winning two out of three games this week. Currently, Marshall, North Texas and FAU are tied for the best record in the conference.
Redshirt junior goalie Sydney Drinkwater is now third all-time among FAU goalies for shutouts with 12, after recording two this past week. Only Jessica Badders (14) and Molly Keating (25) have more clean sheets in program history.
Going into the Brown game, FAU had a 180 minute scoreless streak . A goal in the 13th minute of the loss ended the streak at 198 minutes.

Fans set two new attendance records during Friday night’s game versus the Miami Hurricanes. The announced crowd of 30,321 was the largest ever at the FAU Stadium, and the largest for any sporting event in Palm Beach County history.

With two sweeps at the Mayo Invitational Tournament this weekend, the volleyball program brought its season total to seven. Every win they’ve had this season has been a 3-0 sweep.

Softball will hold its annual alumni game on Friday, Sept. 18 at 7 p.m. The game will take place at FAU’s softball stadium.

Hashtag of the Week:
#OWLin

Last week was huge for the university on the sports side of things. A record-breaking sellout crowd attended the football game, and hosting the first Power Five conference team to play the Owls at FAU Stadium both represented major program milestones.

The game was one of only two Football Bowl Subdivision games scheduled for the day,and was televised nationally on Fox Sports One.

Head coach Charlie Partridge and his team still have a thing or two to figure out on the field, but the fact the Owls have scheduled bigger schools in the future means the team is already looking to improve.