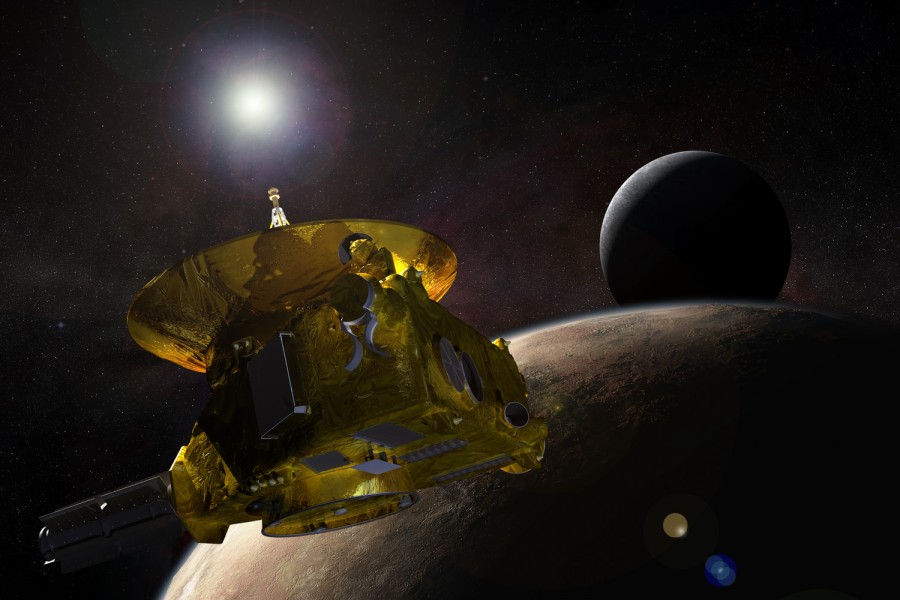 oday New Horizons, a grand piano-sized spacecraft mounted with cameras and sensors, is hurtling past Pluto and the Kuiper Belt at 9,000 miles per hour, finishing its initial nine-and-a-half year, historical journey into the outermost parts of our solar system.

New Horizons will not be paying a landing visit to Pluto, but will simply wave “hello” and take as many measurements as possible as it passes by to finally give scientists a clear look at the most distant, former planet – something that, until recently, has been seen only as a pixelated ball.

In 2001, Johns Hopkins University’s Applied Physics Laboratory took the challenge to make a journey to the farthest reaches of our solar system and obtain coveted information about Pluto possible. They won a competition held by NASA to find the best contender and further designed, built and launched New Horizons from Cape Canaveral, Fla. within five years and at a price tag of $700 million.

New Horizons is meant to fill in the large gaps in knowledge about the outer solar system. According to Henry Throop, a senior scientist at the Planetary Science Institute and member of the New Horizons team, Pluto is the first of a third class of planet in our solar system – small and icey, unlike the rocky planets including Earth and Mars or gas giants like Jupiter – that we can explore.

He explained that “[we] kind of are writing the book on this class of other bodies that dominate the outer side of our solar system, every piece of data blows our minds open.” 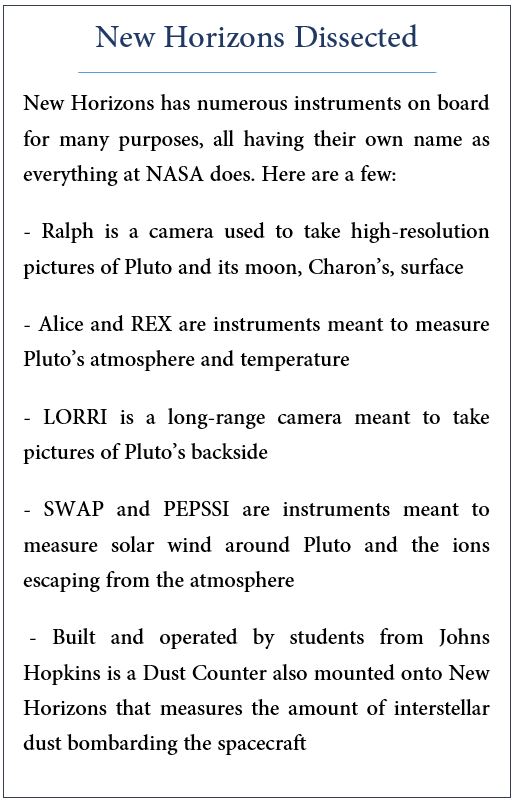 Physicist and Coordinator of the Florida Atlantic Observatory Eric Vandernoot thinks similarly. “This is a whole new class of planet we’ve never seen, it’s becoming more interesting than we ever imagined before,” said Vandernoot.

He also explained that there is now some evidence of Charon – Pluto’s largest moon – possibly pulling Pluto’s atmosphere away, essentially causing them to share an atmosphere.

Glen Fountain, the Project Manager for the spacecraft who has been with the project since its proposal, said, “Textbooks will end up being changed … [New Horizons] makes the third zone of the solar system a real place, with very real geology we can describe.”

Upon its discovery in 1930 by astronomer Clyde Tombaugh, the scientific community had much disagreement on Pluto’s mass, size, orbit and, of course, planetary status. 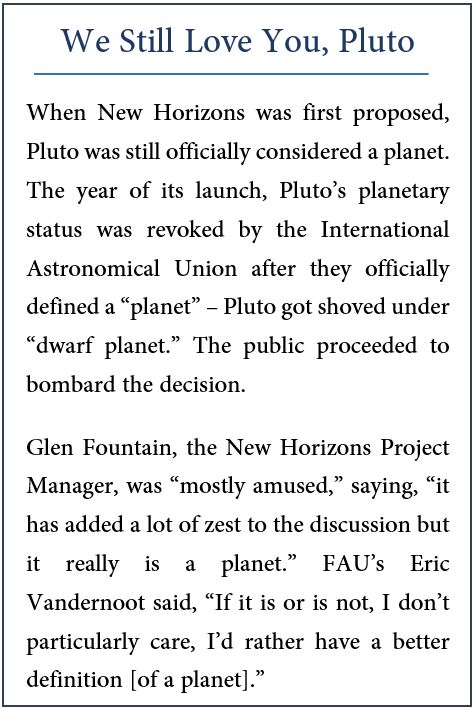 Eventually, larger telescopes and more precise tools were created to learn enough about Pluto to put many disagreements to rest. But what the now, dwarf planet exactly looks like is still a mystery.

Andy Cheng, a junior math and physics major, feels that this is the source of the significance of New Horizons’ trek. On the FAU Class of 2018 Facebook page, Cheng said, “I think this mission does change the ways we used to perceive Pluto, and it might allow us to reconsider Pluto as a planet since we have better equipment to observe it than before. And this does matter to all of us because this mission allows us to better understand the universe we’re living in.”

Now, it’s easy to imagine a bunch of scientists twiddling their thumbs during the nine years it took the spacecraft to get to Pluto. Throop and Fountain made the point that much more was going on.

Throop described how many rehearsals “on where to point [the spacecraft] and for how long” were done repeatedly down “to fractions of a second.” A significant amount of time went into perfecting this timing for when the spacecraft would be pointing at certain places of interest, say Pluto’s surface, to get the best images and measurements.

The timing had to be optimized because “there’s no joystick, there is a pre-programmed set of instructions,” says Throop. “We want to get all the science we possibly can in this fly-by … It’s taken nine years but we only have one shot.”

Fountain said, “Nine years not sitting back, we’ve been busy.” He mentioned that New Horizons passed close to Jupiter in 2007 and was able to photograph it. “[It] was the only opportunity to see something other than stars.”

According to Throop, the radio signals from the spacecraft will take around a year and a half to travel the three billion miles and get all the information back to Earth.

Even then, what Fountain and Throop wish to happen with the spacecraft is for it to continue travelling in the Kuiper belt, the outer part of our system where Pluto is, to find more of the third class of planets.

Fountain says it may be a reality, but it depends on funding from NASA. He is optimistic, though. “When I was growing up, Pluto was just out there … Now we know lots of objects are out there, over a thousand have been identified. There’s a couple objects we can reach [with New Horizons], and its interesting simply because we haven’t seen them before.”

Pluto is the final world to explore, said Vandernoot and that after New Horizons there are currently no other plans to travel back out into space.

With what is found from New Horizons history will be made, every planet – or dwarf planet – in the solar system will have been at least somewhat explored, and with more funding from NASA, New Horizons will bring back data on even more.