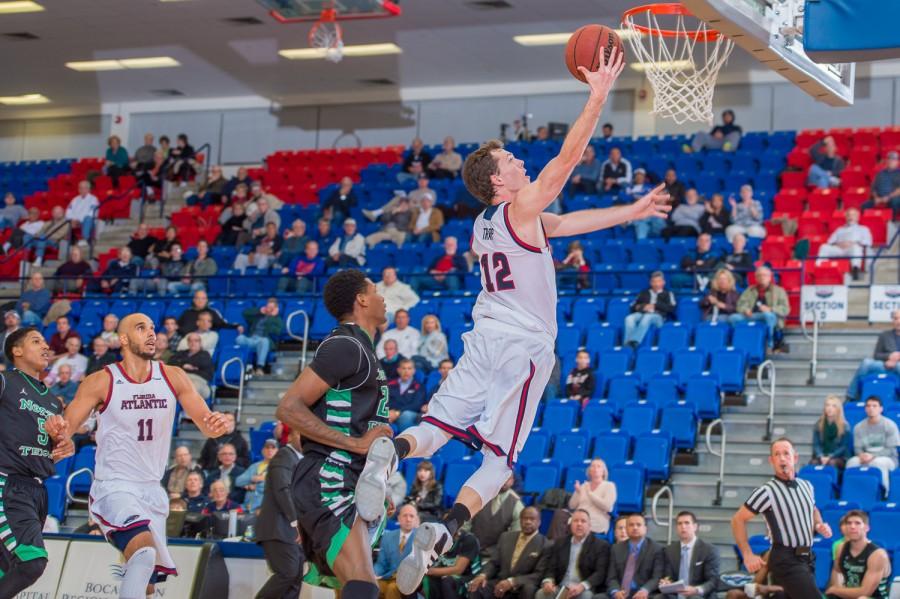 Possessions in men's college basketball will be 30 seconds next season, meaning more chances to score for Jackson Trapp (12) and the FAU basketball program. Photo by Max Jackson

he sound is familiar.

Any basketball fan knows it, the buzzer echoing through the gymnasium at full volume. Elating joy  for some and dread for others, the shot clock is the biggest factor controlling the pace of offensive movement in all organized basketball.

For the first time since the 1993-94 season, the NCAA elected to change the time on the shot clock in the men’s game, shortening the countdown from 35 to 30 seconds in a move to speed up the game’s offensive production. The women have had the 30 second clock since 1970-71.

Also changed from last season is the length of a women’s basketball game, which now will be played in four 10 minute quarters instead of two 20 minute halves. And the amount of timeouts a coach has available (five) as well as can carry over into the second half (three).

All these rule modifications are obviously trying to speed up the college game, which can be notoriously drawn out. Timothy Burke, a writer with Deadspin’s Regressing, crunched the numbers of how long it took to play the final minute of NCAA tournament games in 2014.

His findings show it took an average of five minutes and 57 seconds just to play that short period, slowed down by teams fouling, the ensuing free throws and timeouts. Not exactly exciting.

The first shot clock was introduced to college ball in 1985-86, looking for a way to increase scoring and draw fans. Teams would constantly gather a large lead and pass around with no reason to shoot the ball, creating a boring atmosphere.

Extreme cases preceding the clock included an 11-6 Tennessee Volunteer win over the Temple Owls in 1973, a scoreline that would look better in a men’s rec league than in a division one contest.

When the NBA had this same problem in the 1950s, they had introduced a 24-second shot clock to create more offensive possessions and limit the stalling of games. The clock had its desired effect, giving fans high-scoring, quick games that are still commonplace in the league today.

The NCAA already has experimented with the clock during last season’s Collegeinsider.com tournamet (CIT), National invitational Tournament (NIT) and College Basketball Invitational (CBI), and saw a small increase of both possesions and points. According to kenpom.com, teams in the trio of tournaments had four more points and three and a half more possessions than in the regular season.

Now that the rule is implemented, I think that it will take a few years to see if any significant effect truly comes out of this. The law of averages would suggest that players would eventually adjust, and there would be a greater difference over time.

The change in the clock is not going to change the college game completely, especially because teams in college control the pace differently than the pro game. A smaller program (example: FAU) will try to give a giant like Kentucky or Duke less time with the ball and stall no matter the time on the clock.

This is due to the difference in talent between certain schools than the NBA.

But, it’s a step in the right direction. It will be a fan-friendlier environment, much like the NBA now is. The game will move faster and will have less stoppages. Very few fans care how long a game lasts, but the time saving measures will help the fan-viewing experience at home with less commercials or long breaks from the game action.

Players will also be more adjusted to a future in the professional leagues with the switch, which could make for an easier transition than the old countdown. The clock is starting on this new concept for college teams next year, and when it hits zero, the buzzer will show things have changed for the better. BZZZZZZZZZZZZZT!