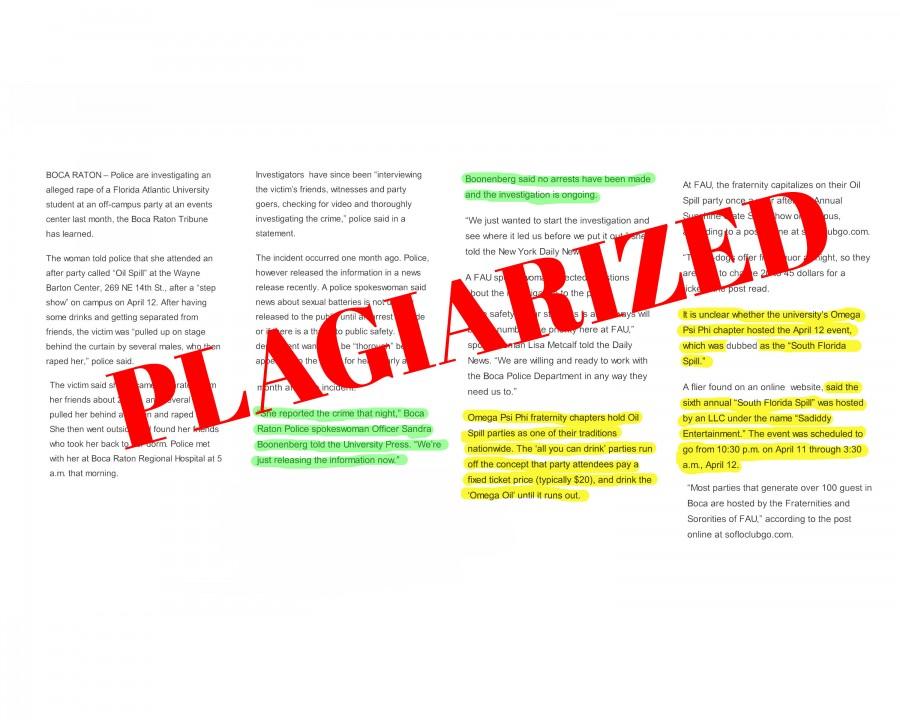 At FAU, if I get caught plagiarizing a paper, I’ll get an F. It would go on my transcript and on a repeat offense, I could get expelled.

But if I do it at The Boca Raton Tribune, I’ll get a paycheck.

Three weeks ago, I wrote this story about an alleged gang rape involving an FAU student.

A week later, The Boca Raton Tribune posted a similar story. If it looks familiar, that’s because sections of it are literally the same, word for word, as mine. I’ve been plagiarized.

Here’s a photo of the Tribune’s version, written by Fred Hamilton. Highlighted in yellow are sections taken from my story — three paragraphs in total.

On Monday, May 18 the UP notified The Boca Raton Tribune about Hamilton’s plagiarism. University Press advisor Neil Santaniello sent an email to the paper’s Managing Editor, Pedro Heizer and editor, C. Ron Allen.

“[Hamilton’s story] included three paragraphs that appear to have been lifted word-for-word — or almost verbatim — from the UP story, but with no attribution or credit given to the University Press or Emily, the author,” Santaniello said in his email.

“The University Press requests that the Boca Raton Tribune take the appropriate action for this apparent violation of journalism ethics, including correcting the story to credit the UP as the original source of that particular information and perhaps adding a hyperlink to the UP article.”

After an additional email from Santaniello and phone call brought no real response, I decided to try for myself.

On May 21, at 2:44 p.m. I called the Tribune office myself. I asked to speak with Fred Hamilton. “I don’t know anyone by that name here,” replied the receptionist. Fifteen minutes later, I called again, asking for Heizer, but only reached his voicemail.

Not His First Rodeo

Hamilton — who has contributed to the Tribune since 2013 — used my words and took credit for them, and I wanted to find out more about this guy.

So I looked into it.

It took me less than an hour and some Googling — I cross-referenced lines in other stories Hamilton wrote and checked datelines on the matching articles — to figure out that Hamilton’s stolen words from other publications before, including the Sun-Sentinel, Wired and the Daily Beast. This was not a fluke.

Here are some examples I found:

“If these plagiarism accusations play out, I think the saddest part, at least where my article is concerned, is that the professor was so willing to talk,” Dan Sweeney, the author of “FAU gets $600,000 to create Big Data lab” told me in an email.

“I got those quotes from Professor Khoshgoftaar within an hour or two of requesting an interview. And he would have kept going longer if I’d let him. He was eager to talk, proud of his work. It wasn’t like an antagonistic interview, where getting good quotes is like pulling teeth.”

Sweeney wrote his article on FAU’s Big Data grant over a month before Hamilton used the same quotes without attributing the Sun-Sentinel.

To journalists, ‘plagiarism’ is practically a mortal sin. And as a student journalist, and a student member of the Society of Professional Journalists, to have to deal with it like this is pretty disappointing.

“Never plagiarize. Always attribute” is bullet number 18 out of 35 in SPJ’s Code of Ethics.

People keep telling me “imitation is the greatest form of flattery,” when I tell them what’s happened to me this month. Well in this case, if the “imitation” means stealing a student journalist’s words,  I think it’s pretty pitiful.