A controversial call, a SportsCenter highlight and a walkoff bumps FAU into a first place tie with Middle Tennessee for the Conference USA lead 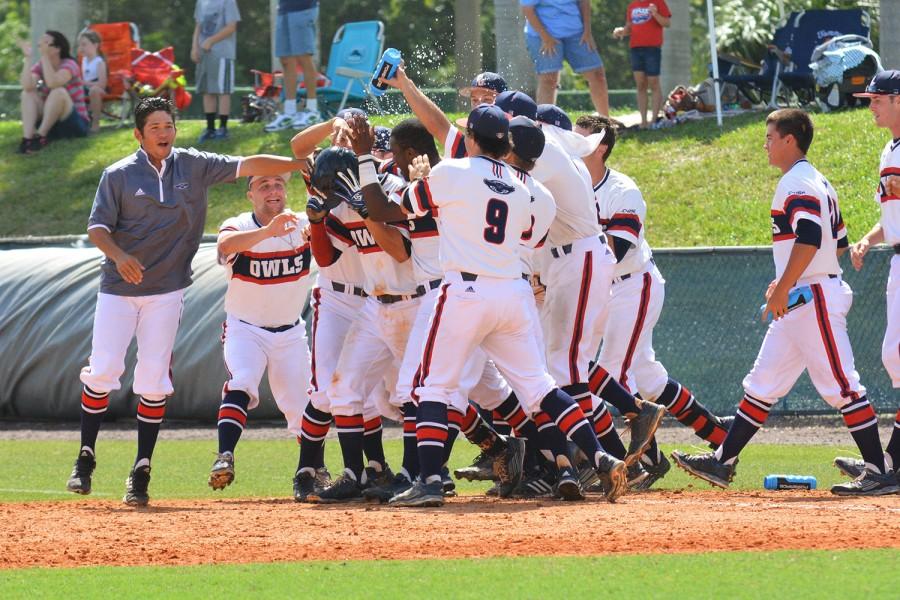 Third baseman Ricky Santiago is swarmed by his team as his extra innings sacrifice hit wins the Sunday game for the Owls. Michelle Friswell | Associate Editor

After losing the first game of the series in a controversial fashion, the Owls bounced back to win the last two games, including a walk off on Sunday to finish the series. They now sit tied for first place in the Conference-USA, and hold the best overall record.

Controversy occurred on a play in game one of the series. The call in question happened in the eighth inning, with the Owls losing 6-5, and junior Brett Lashley hit a chopper to FIU’s shortstop, Julius Gaines, with the Owls’ tying run on first base in sophomore Stephen Kerr.

Gaines fielded the ball then proceeded to bobble it, while running over to second base to tag out Kerr. Kerr appeared to slide into second base before Gaines regained control of the ball. However, second base umpire John Coons called Kerr out at second base.

“I was pretty sure he was safe,” said FAU coach John McCormack, who viewed the play from the Owls’ dugout. The FAU coach went out to argue with the umpire and according to McCormack, Coons “changed the story” of what happened during the play. “From my vantage point, I think he got it wrong.”

Junior Brendon Sanger, Conference-USA’s reigning “Hitter of the Week,” made a case to win the award again this week. Sanger reached base 11 times in 16 plate appearances this weekend, and hit his third home run of the year. He finished the series with five hits, six walks, five RBIs and four runs scored.

“[Sanger] is an advanced hitter,” said McCormack. “He knows the strike zone, he knows what pitches he handles well; college guys with that much feel at the plate are hard to find.”

Sophomore Sean Labsan was also awarded with conference honors as he was one of two pitchers named Conference-USA’s “Pitchers of the Week,” after his performance last Wednesday against University of Central Florida. Labsan struck out ten batters in six innings, allowing one run.

Kerr was not going to allow Sanger and Labsan to be the only Owls gaining attention around the league. In the fourth inning of Friday’s game, Kerr made a play which would reach SportsCenter’s “Top Ten Plays.”

Kerr, who did not play second base in every game last series, seemed refreshed for the Owls. “The best thing we did for Stephen was give him some time off. His body was a little bruised up…he’s more active now, he makes things happen,” explained McCormack.

Kerr finished the series reaching base on eight of his 15 plate appearances, collecting four hits and four walks over the weekend.

Here is what you need to know from each game of the series:

After starting pitcher, junior Kyle Miller, pitched a three-up-three-down top of the first inning, Kerr, Lashley and Sanger each singled to start off the Owls’ half of the first. Kerr scored on Sanger’s single. Junior Roman Collins then reached base on an error, scoring Lashley and advancing Sanger to third base, who then scored after a sacrifice fly by sophomore Esteban Puerta. Junior Christian Dicks then singled, scoring Collins.

Miller allowed the first three FIU batters to reach base in the top half of the second, but was able to get out of the inning allowing only two runs, keeping the lead for FAU, 4-2.

Collins scored the Owls’ fifth and final run of the game in the third inning, after hitting a triple down the right field line and scoring on a Puerta ground out.

Junior Devon Carr took the mound in the eighth inning for the Owls, but only could record one out after allowing three runs to score, tying the game at five. Fellow junior Seth McGarry relieved Carr, but walked his first batter who eventually scored three batters later. McGarry (3-1)  was charged with his first loss of the season.

The Owls were shut down in the bottom of the inning, and tried to answer in the ninth, but the controversial Gaines play hurt their chances. Sanger grounded out to first base to end the game.

Senior Reily Monkman (5-1) was unable to pitch for the Owls due to sickness.

The Owls had other opportunities to score in the game. Dicks led-off the sixth inning with a triple and Sanger doubled with one out in the seventh inning. Both runners were stranded on the bases.

“We have got to come up with the hit…to give us space in these close games,” said McCormack. “We gave the game away.”

Sophomore CJ Chatham hit 2-for-4 for the Owls with his 10th double of the season. He also scored one run.

Senior Drew Jackson started game two on the mound for FAU. He allowed one run to score in the first inning and two in the third. Jackson was taken out of the game after four innings.

Sanger started the scoring for FAU with a two-run home run, scoring Lashley and regaining the lead for the Owls, 2-1.

Freshman relief pitcher David McKay started the fifth inning for FAU. McKay threw four shutout innings, allowing one hit and striking out four FIU batters. It was the longest outing of his career.

“The story of today was Dave McKay,” said McCormack.

With FIU leading in the fifth inning, 3-2, Sanger doubled to left field, scoring Kerr. Sanger then scored after senior Ricky Santiago also doubled, giving the Owls the 4-3 lead after five innings. FAU took a patient approach in the sixth inning, walking four times and extending their lead to five, 8-3.

Senior John Sebelle pitched the ninth inning for the Owls, clinching their victory.

Sanger and Kerr combined to reach base seven times in ten plate appearances. Dicks hit 2-for-4 with a triple and one RBI.

Junior Brandon Rhodes started the third and final game of the series for the Owls on Sunday. After striking out the first two batters in the top of the first inning, the Golden Panthers hit three straight singles giving FIU the early lead, 1-0.

Santiago led off the bottom on the second for FAU with a single to center field. After advancing to third, via a Collins walk and Puerta double play, Santiago scored to tie the game at one when Dicks reached base on a fielding error by FIU third baseman Josh Anderson.

FAU took the lead (2-1) the following inning when freshman Ryan Miller scored on a Lashley sacrifice fly. Ryan Miller doubled to lead off the inning, and advanced to third on Kerr’s bunt single.

Another two-out trio of singles off Rhodes allowed FIU to tie the game at two in the sixth inning. FAU took the lead back in the bottom half of the sixth with a two-out rally of their own. Puerta doubled with two outs, then scored after Dicks singled. FAU led 3-2 after six.

Sebelle relieved Rhodes with one out in the sixth inning and a runner on base. Sebelle’s first batter Edwin Rios hit a two-run home run, giving FIU the 3-2 lead. It was Rios’ conference leading 11th home run this season. Rhodes allowed three runs (two earned), with seven strikeouts in the game.

The score remained 3-2 in FIU’s favor until the eighth inning when Sanger, who led off the inning with a single, advanced to third base on a Santiago double. Sanger then scored the tying run on a Collins ground out.

Collins grounded out again in the ninth inning, sending the game into extra innings where FAU had a record of two wins and three losses, entering today. The Owls left the bases loaded in the eighth inning and left two runners on base in the ninth.

FIU had a chance to take the lead in the top of the 11th inning, when leadoff hitter Gaines singled and advanced to second with two outs. Golden Panthers’ Zack Soria then singled and Gaines was waved home, where he then fell and had to retreat to third base. McGarry, who entered the game in the eighth, was able to force out number three, sending the game into the bottom of the 11th.

Sophomore Kevin Abraham, who replaced Ryan Miller as the catcher in the ninth inning, singled to lead off the bottom of the 11th for FAU. Abraham advanced to third on a Lashley single after Kerr bunted him to second base. FIU then intentionally walked the reigning hitter of the week Sanger, loading the bases with one out for Santiago. Santiago hit a deep fly ball to left field, allowing Abraham to score from third to end the game on a sacrifice fly.

Santiago was 3-for-4 on the day with one walk, one run scored and his game-winning RBI.

McGarry was credited with the win, improving to 4-1 on the year. He threw four shutout innings, allowing only two base runners.