Storm Warning: What happens when a hurricane hits campus?

Knowing what to do before, during, and after a hurricane can mean the difference between life and death.

magine sitting in your dorm in the midst of hurricane season, when suddenly a tree branch  catapults through your window, breaking the glass and narrowly missing your head.

Hurricanes have the power to make this a reality and it’s important to have a plan of action before, during, and after a storm — especially with Florida Atlantic University being in southern Florida, a hurricane prone area.

According to the National Oceanic and Oceanographic Administration, Florida has been hit by a hurricane for 32 seasons straight, or once every five years on average.

The last storm to cause serious damage to FAU was Hurricane Wilma in 2005, which hit land as a category three, costing the university 7.5 million dollars. According to NOAA, a category three storm can exert 111-129 mph winds.

NOAA’s website describes these winds as causing significant damage, “Well-built framed homes may incur major damage or removal of roof decking and gable ends. Many trees will be snapped or uprooted, blocking numerous roads. Electricity and water will be unavailable for several days to weeks after the storm passes.”

Hurricane Wilma affected the Jupiter and Davie campus as well as the Boca campus, resulting in power outages and damage to buildings and trees.

According to Department of Emergency Management Assistant, Ana Bastias, on the Boca campus the roof of the Recreation Center as well as that of the Science and Engineering Building was destroyed. About half of the blue directional signs on campus and 35 percent of the street lamps were destroyed as well.

The Dorothy F. Schmidt College of Arts & Letters complex and the Wimberly Library had their roofs destroyed along with the Education Building having shattered windows and ceiling damage.

During a storm, it’s important to stay indoors and away from windows, as strong winds may take this opportunity to fashion darts out of shards of glass, with students being used for target practice.

FAU’s Department of Emergency Management determines whether or not a campus evacuation is necessary after careful consideration of weather conditions. Normally, a hurricane warning causes the campus to close, making students have to leave campus.

According to Bastias, when a hurricane becomes a threat, the university must be evacuated. At this point the Director of Housing Facilities, Michelle Smith, will be responsible for ensuring that all staff and residents are safely evacuated.

For out of state students, or those with no alternate options for shelter, the University will provide transportation to and from Red Cross shelters if the storm is strong enough. The closest shelter to FAU is located at Boca Raton High School, just a seven minute drive from campus.

These shelters are used as a last resort and FAU encourages residents to stay with family or friends if possible. Information regarding local Red Cross pick-up locations will be posted on flyers in all the dorms.

After a hurricane, beware of flooding and stay away from standing water as it may contain power lines and be electrically charged. Do not drink tap water as contaminants may have entered it due to a loss of pressure in water moving systems, according to NOAA.

Students may find themselves hosting dinner parties for unwelcome congregations of bacteria in their gut if the water is consumed.

When a hurricane is approaching, throughout the storm and for a period afterward, FAU’s homepage will include information about schedule changes and closing procedures. It will also include details on housing, food, services, athletics, classes and other subjects.

For more information on hurricane safety and preparation, visit the NOAA official site. 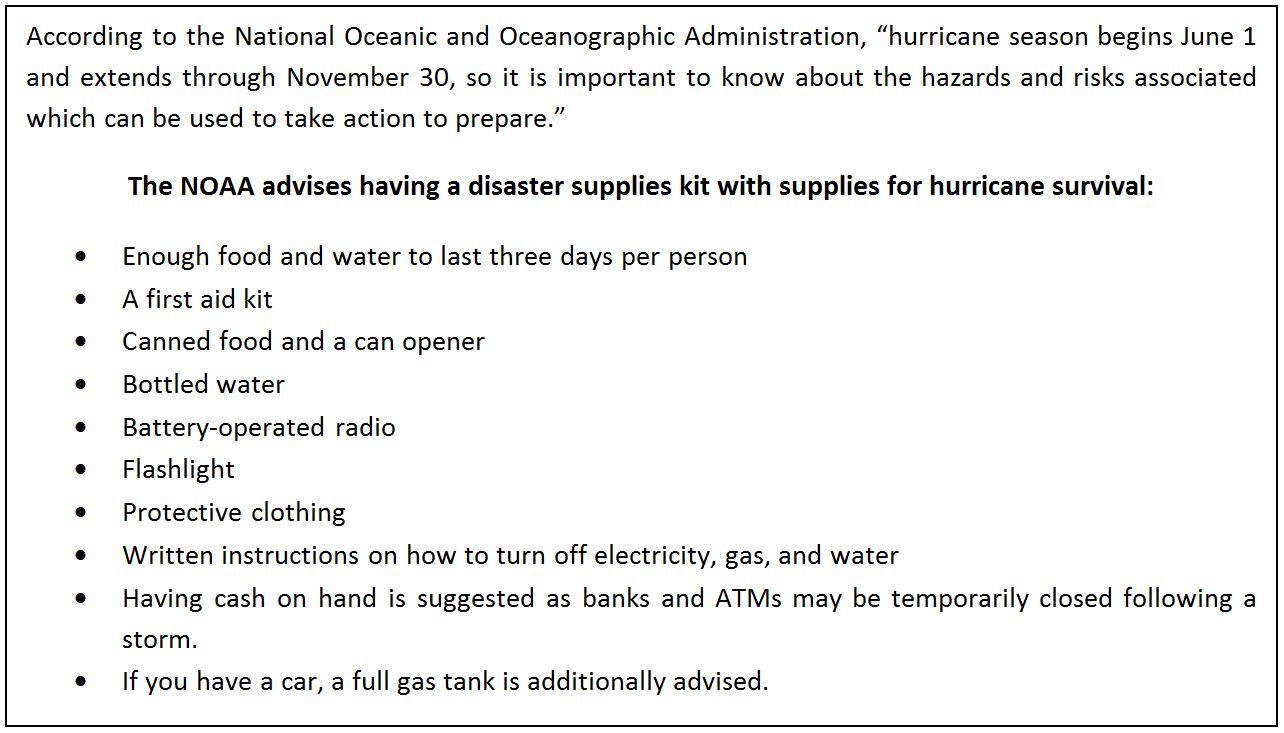