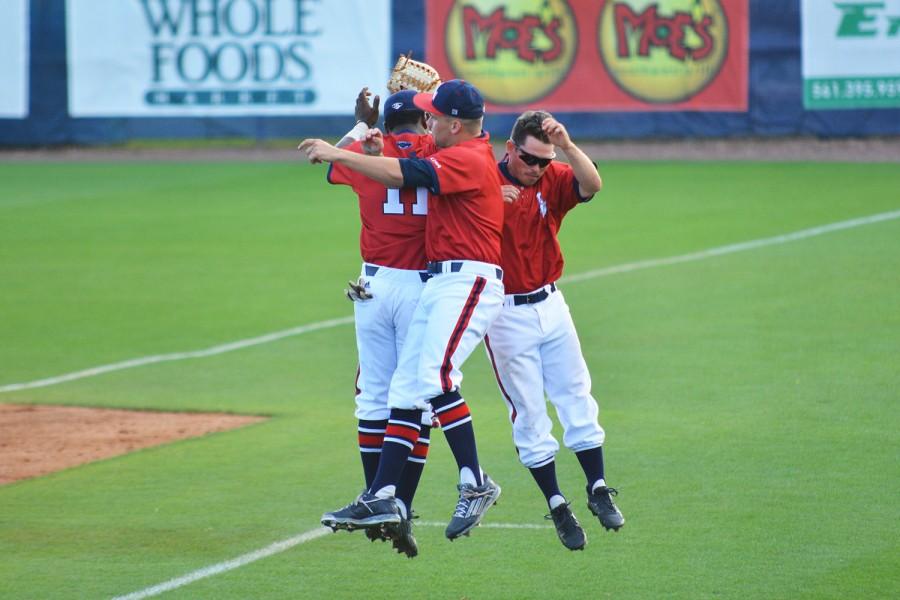 Despite the stormy weather in the area, everything ended up sunny for the Florida Atlantic University Owls against the Monmouth University Hawks.

The Owls have now swept two of the first three series of the season, and are currently ranked at 30 in the National College Baseball Writers Association poll.

Here’s what you need to know from the series:

Kyle Miller got the starting nod for the Owls, his third start of the year. Miller began the game behind early, giving up two runs on two hits and an error in the first inning, and was unable to regain control of the game.

“It’s very worrisome” said head coach John McCormack of Miller’s last two starts. “Essentially, Kyle has gone out there with one pitch, his fastball. He wasn’t able to throw his breaking ball or change up for strike. Fastballs get hit, especially if the batter has no other pitches to fear. “

Miller pitched 3 2/3 innings, giving up five runs (four earned) on six hits with four strikeouts. The five runs are the most he has given up this year.

Chris McKenna started for the Hawks, pitching five innings while giving up three runs on two hits. He had three walks and three strikeouts.

Down 5-1 in the bottom of the sixth inning, FAU went on an offensive rush, scoring eight unanswered runs on 10 hits.

Brendon Sanger and Roman Collins each had two doubles in the final four innings. The Owls had five doubles for the whole game, which drove in five of FAU’s nine runs. Collins finished the game 2-for-4 with three RBIs, while Sanger also finished 2-for-4, but with one RBI.

“I think we had a few of them,” McCormack said of his team’s extra base hits. “You hit a single, you need a couple of them. When you hit a double, you can score some guys.”

Reily Monkman got the win for the Owls after pitching a third of an inning in relief, striking out the only batter he faced. The win is Monkman’s second of the year. Frank Trimarco received the loss for Monmouth after giving up three runs in an inning and two thirds of work.

In the first game of the doubleheader, Drew Jackson got the call to start for the Owls. Jackson pitched six innings, giving up no runs on one hit with three strikeouts and no walks.

“Drew came out and gave us a chance to get runs,” McCormack said of the senior. “We fell behind in his last start, so we talked to him about keeping us ahead in the game.”

FAU’s relief pitchers Alex House, Blake Sanderson and Weston Clemente combined to give up four hits and no runs in the innings following Jackson.

Sean Labsean, who is usually seen on the mound for FAU, had two doubles and three RBIs in the day. Four other Owls finished the day with two hits — Brendon Sanger, Ricky Santiago, Roman Collins and Kevin Abraham.

FAU scored most of their runs in the third and fourth innings, putting up four runs in each frame. This was the second-most runs they have put up in a game this season, the most being the 16 runs they put up against the University of Connecticut on Feb. 13.

Junior Robbie Coursel picked up the start in the second game of the doubleheader and picked up where the Owls left off in the first game. Coursel pitched five innings of shutout baseball, while giving up five hits with three strikeouts and a walk.

“It was a great double header,” McCormack said of both Coursel’s and Jackson’s performances on the day. “It’s tough to sweep a doubleheader, let alone keep a team scoreless for 18 innings.”

Anthony Ciavarella started for Monmouth, giving up four runs on seven hits in the four innings he pitched. Ciavarella walked two and struck out four.

Three home runs proved to be the difference maker in this game for the Owls’ offense, including two from junior outfielder Christian Dicks in the sixth and eighth innings. The homers were the second and third of the year for Dicks. Brendon Sanger hit the other home run in the bottom of the first inning — his first of the season.

“Dicks was fabulous,” McCormack said. “He struggled early in January and February, but the light has come on for him and he’s doing well now.”

Dicks also had a double, and finished the game 3-for-4 with six RBIs. Sanger’s home run was his only hit of the game.

Coursel earned the win for FAU, his first of the season and first as an Owl. Ciavarella received the loss, his second of the year for the Hawks.

FAU’s next games are a two-game set against the University of North Florida on March 3 and 4.