Shihong Huang: Helping The World One Program At A Time

Dr. Huang is one of six women engineering professors at FAU doing research on brain waves controlling computers, and in her spare time, dancing and golfing. 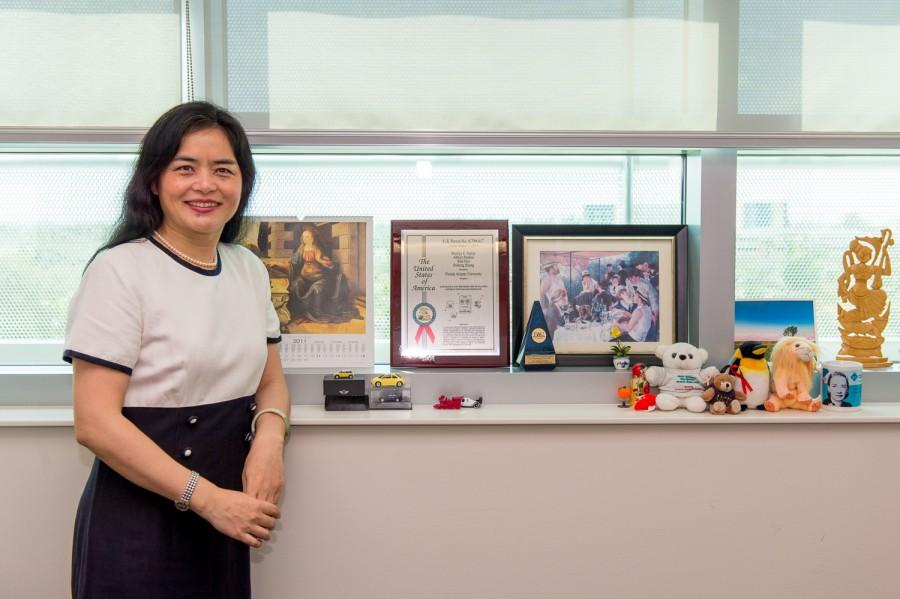 Walking into the Engineering East building on Florida Atlantic University’s Boca Raton campus, I am kindly greeted by an elevator announcing I am going to the fourth floor.

Finding the door of room 434 ajar, I knock and I am greeted by one of just six female faculty engineers (there are 72 male ones), FAU’s Professor of Computer Science & Engineering Dr. Shihong Huang

She ushers me in and welcomes me to a seat across from her paper-covered desk. As she mentions that her interest in software engineering began in high school in China, I notice two looming bookcases overstuffed with well-worn programming books beside us — unsurprising, given that she has dozens of journals and papers published.

She continues on passionately about the goal of her research saying, “My philosophy is to make software have an impact on people’s lives.”

Before she can continue, we are suddenly interrupted.

She jumps and spins in her chair to greet her research colleague, Dr. Arne Berre, on Skype. Berre is the chief scientist of Scandinavia’s largest research institute, where Huang collaborates on research and had a paid research trip.

Huang tells me he [Berre] is currently in Norway, and that I should say hello. I briefly greet him before she discusses when they would talk again and closes the call.

Now uninterrupted, she talks about an app called Ying that she is working on with a student, Maria Minan.

“Do you know what it means?” Huang asks. I reply no and, laughing, she says “it’s owl in Chinese, because FAU’s mascot is the owl.”

Pulling up a Youtube video of the app’s interface on her computer screen, she describes how Ying is meant to increase the sociability of autistic children. They learn, among other lessons on the app, by tapping on the image of say a cat, and hearing the word cat, learning as they go.

Huang’s interest in this research is also unsurprising, given that she is involved with the autism community according to Minan.

Huang repeats with determination in her voice that, “The goal of my work is to have software engineering help people’s lives. Even one percent impact and we are good.”

Minan later elaborates, supporting success of Huang’s goals, that, “[Huang] is very knowledgeable about the software engineering domain and combines that knowledge with other research fields to come up with solutions to real-world problems.”

Suddenly excited, Huang describes how she is using her computer in front of her. Pointing to the keyboard and mouse, she compares the relatively fast processing speeds of both the brain and computer, and comments on how the interface between them is slow.

Huang explains that this is the base idea for her collaboration with neuroscience researchers to create computers controlled with brain waves — with her coding the software for it, of course.

My jaw drops and, smiling, Huang says, “it’s cool isn’t it?” Glancing over to her second monitor, she says that we could be having this conversation and she could think about having music playing, causing the computer to do so.

Doing so would be “utilizing the parallel processing power of the brain” in the software, or in other words, our ability to think about more than one thing at a time.

Most of the classes Huang teaches is in software engineering, skills necessary to a project like this. According to James J. Mulcahy, a Ph.D candidate under Huang, “she’s known for her [Principles of Software Engineering] course”, where students learn to write software collaboratively with students from different universities even in different countries, “an important skill to master for [the] industry.”

Huang’s dedication to her students doesn’t end in the classroom either according to Mulcahy. “I researched in Beijing in the PIRE program for summer 2010 at Tsinghua University my first semester as a Master’s student.  Not only was [Huang] heavily involved in my research proposal and project while I was there, but even flew to Beijing the last week I was there. Then next year, when I had my first out-of-the-country conference presentation, she flew to Montreal and was in the audience.”

Jokingly, I ask her if she’s ever played any video games since she’s a software engineer. Her mouth broadens into a smile as she replies “not enough time.” She does enjoy classical music and watching the news.

Before I can say another word, she gleefully exclaims in a way that makes it seem like a well-kept secret, that “a lot of these things seem completely unrelated, but they are.”

Huang tells how she was watching BBC news and they were talking about DVD’s meant to help autistic children be more social, and she thought, “why one-way when it could be an interactive two-way experience?” hence her app.

Moving on from her secret connection of news to software, Huang says she has always wanted to learn piano, but usually spends her spare time playing tennis and golf.

Minan reveals later on that Huang is an amatuer dance aficionado as well, practicing Zumba and ballroom dance.

Remembering that I am a physics major, Huang elaborates with an air of excitement how golf is “totally physics” from the force of the club, to the angle the ball makes in the air. I mention that I play piano, and immediately a smile appears on her face.

After explaining where there are pianos on campus and promising to play piano with her, her enthusiasm lowers a notch to allow us to continue.

I ask how common female engineers are saying, to my knowledge, they are rare. She slowly counts in her head and says, “There are five other female engineers on staff which is getting there, but at the beginning there wasn’t much.” The beginning being 2004, when she came to FAU. She says, without much of a happy expression, that there’s “a small amount of girls in my classes, about one or two in 30.”

Recalling that I am a physics major again, she mentions how her father, mother and brother are all physicists. Laughing, she calls herself an outcast compared to her family. “I’m the black horse,” she says.

As I make my exit, she reminds me to tell her when I am back from spring break so we can play the piano together. She says so in such a kindly tone that I feel as if I have known her for years.

I round the corner, losing sight of her as she waves goodbye and travel back to the talking elevator to bring me away.