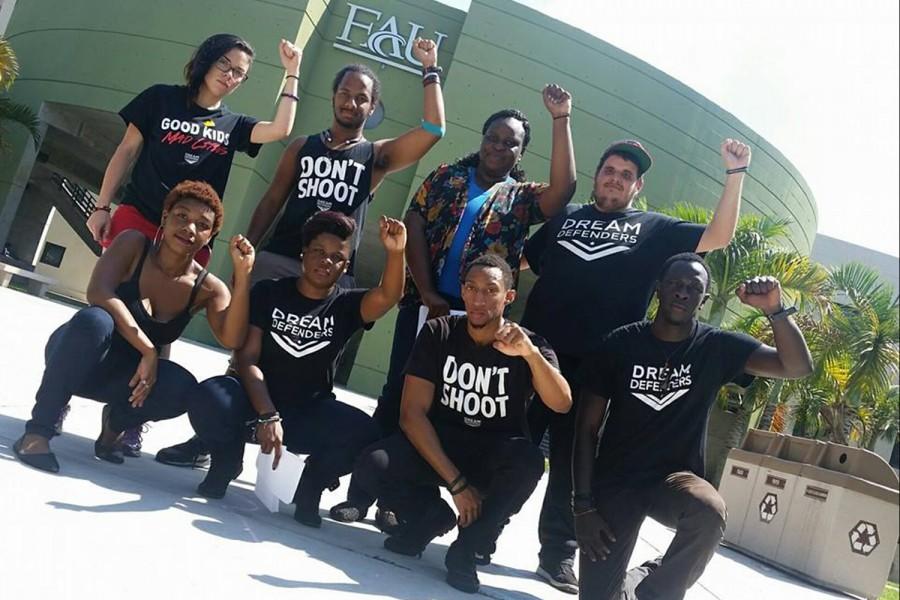 Bodies lay strewn about on the Free Speech Lawn yesterday around noon, outlined in chalk and surrounded by messages like #blacklivesmatter and #justice. Onlookers walked by with curious looks, and many stopped to take pictures or videos.

Members of multiple student groups, including the Dream Defenders, Urban Male Initiative and the Black Student Union played the role of bodies as part of a “die-in” protest to speak out against the treatment of the black population by police.

“A die-in is a peaceful demonstration, much like the sit-ins from the 1960’s,” explained Ian Mann, a senior multimedia studies major and member of the Dream Defenders’ Broward branch. “We laid down for four and a half minutes.”

That 270 seconds symbolically represented the amount of time Mike Brown — an unarmed teenager who was shot and killed by police in Ferguson, Missouri on Aug. 9 last year — lay on the ground before he received medical attention. Brown’s shooting led to much protest across the United States against police brutality and minority discrimination.

“While we are one of the most diverse universities in Florida,sometimes these issues are not always spoken about outside the multicultural student organizations, so we decided to bring it to the public front at the free speech lawn just to let the university as a whole know,” said Mann, explaining the reason why they were demonstrating.

“We were very happy with the turnout today,” said Zhana Kirby, President of the FAU Dream Defenders. “We heard from many people it was powerful, that it opened their eyes and changed opinions.” There was a crowd of about 17 people surrounding the perimeter of protesters during the duration of the demonstration, with people going to and from class in the Social Science building also walking around the group.

Mann estimated that there were 20 people lying on the ground, and another 15 helped with drawing chalk outlines.  The groups also had speakers during the demonstration, including LaDraveous Lee and Mario Lopez, both students at FAU.

“It was really a cooperative effort,” said Graham Brown, senior biology major and member of FAU’s Dream Defenders branch. “Folks from the Dream Defenders, NAACP, Black Student Union, etc. But it was about us coming together under this common cause.”

FAU’s Dream Defenders meet on Thursdays at 7 p.m. in General Classroom South.To learn more about them, visit their website or their Facebook page.