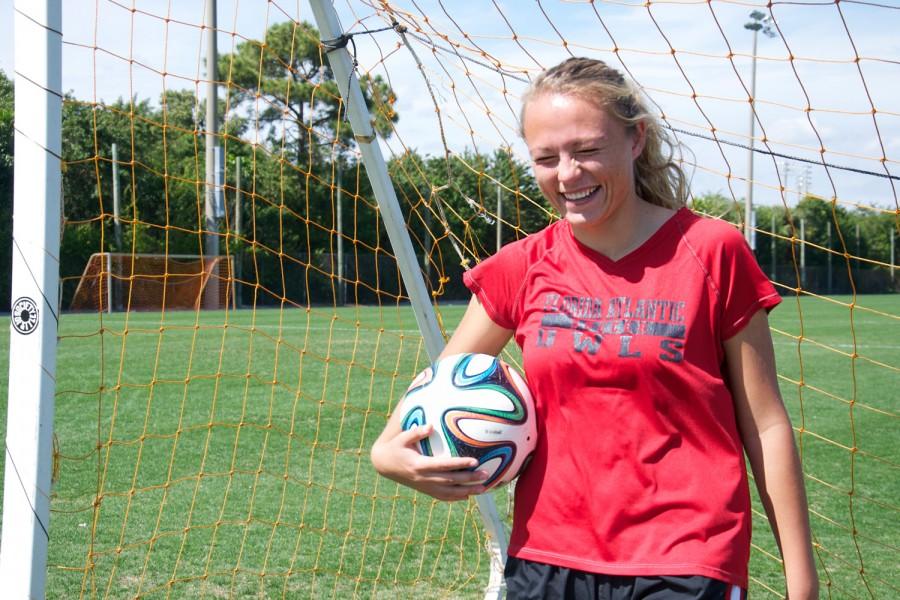 Sept. 16, 2012 — the University of Alabama Birmingham women’s soccer team closes the three-nill gap in the second half of the game against Florida Atlantic. With just over two minutes left in the 90-minute regulation, the Owls break away from the defense.

Claire Emslie — a freshman at the time — receives a long-range pass and scores the game-winning goal, a header from the right sideline. This is her third goal of the match and her favorite goal of her FAU career so far.

Rewind to her childhood — Emslie would play against her brother for fun. Soccer did not interest many of the girls in her community, so she began playing as an 8 year-old girl on a boys’ team in her hometown of Penicuik, Midlothian, Scotland.

“It’s considered a boy’s sport, but I mean, it’s gotten a lot better. Now there’s a lot more girls who are playing in Scotland,” she explains.

A competitive attitude built from playing helped earn the midfielder a spot in the Hibernian Girls and Ladies Futbol Club. This allowed Emslie to represent Scotland at every youth level. In 2013, she represented Scotland on the senior national team in a friendly game against Iceland.

Now a junior, Emslie is a team leader in every offensive category and tied for first in assists with Hildur Hauksdottir. She is also tied for first in game-winning goals (two) and ranked seventh overall at FAU with 22 goals. 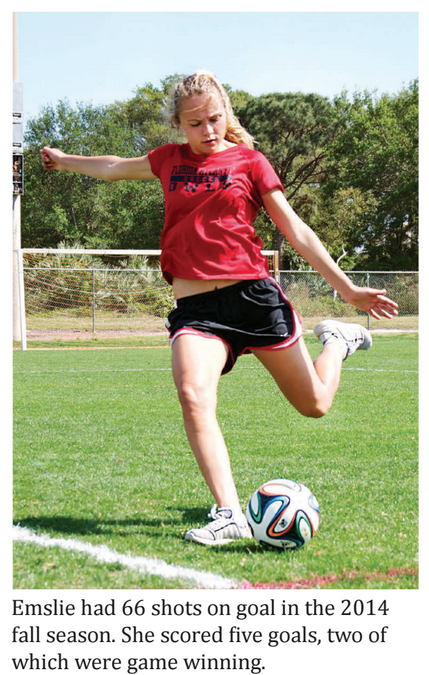 “I knew I scored a few goals but I didn’t realize it was that good … I just play and whatever happens, happens.” She needs six more in her final collegiate season to tie FAU’s all-time women’s record — 28 goals in a career. The record was set by Kelly McGrath in 1994.

Her passion for the game is driven by a feeling of responsibility to her team. She explains, “Last year when we didn’t make conference … That was probably the worst [feeling] so far because of our seniors. You really want to do it for them and you let them down.”

But the most emotional time for Emslie while wearing an FAU jersey was during her freshman year against the University of Louisiana-Monroe.

With around 10 minutes remaining in a scoreless game, Emslie was granted a penalty kick that she missed. Knowing she had to redeem herself, she did so in the 87th minute of the match when she scored the game winning goal. “I think it was more of a relief than anything, but I was happy about that one,” states Emslie.

Soccer is not the only field the Scotland native excels on — she also scores big in academics. “I’ve always been competitive with it, like sports and skills, so I like to get those A’s,” says Emslie.

The exercise science major maintains a 3.93 GPA and was named Conference USA All-Academic First Team for the second year in a row.

This award is earned by those who achieve the highest GPA in a specific sport in all of Conference USA.

Competition drives Emslie’s success in class, but her passion lives in soccer. “I’m gonna try and keep playing soccer as long as I can, and as soon as that stops, I’ll start thinking about a career,” she says.