Snail Venom To The Rescue

FAU professor and students are researching how to make a deadly sting from a cone snail a life saver for cigarette smokers, cancer patients and more. 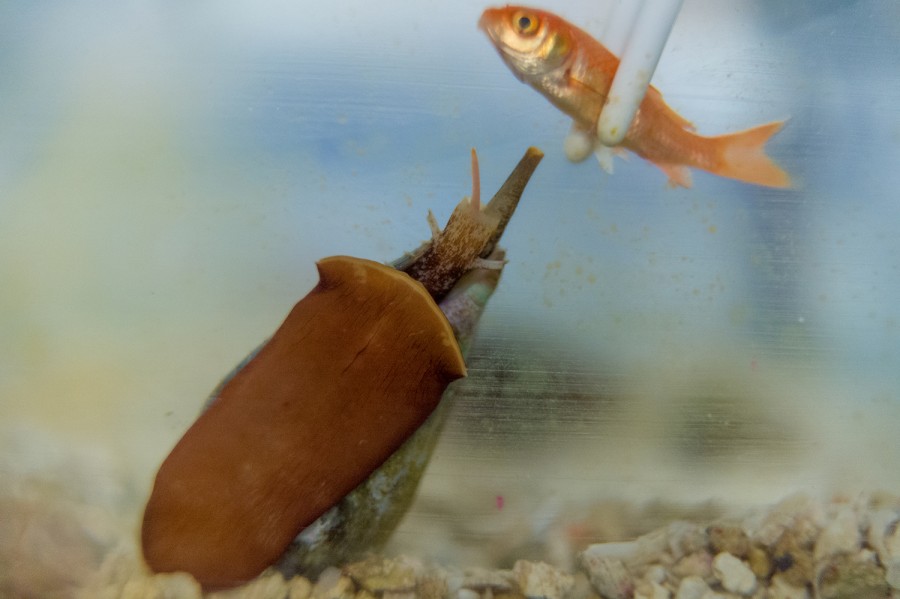 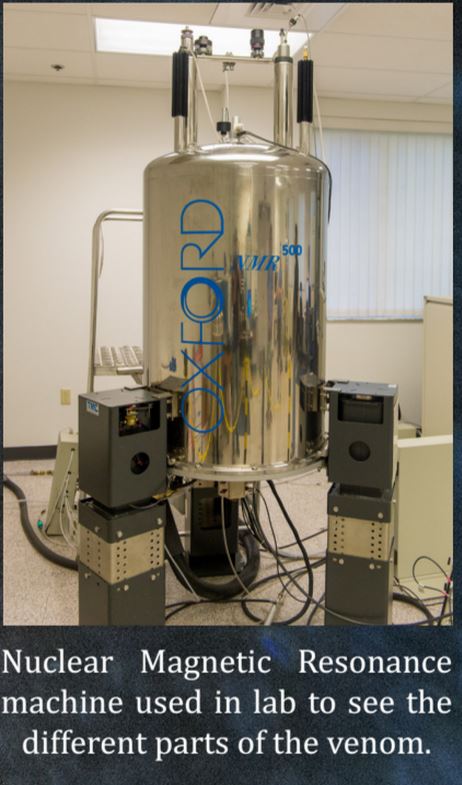 As a fish looms above an innocent-looking cone snail, a thin string-like probe stretches out from the snail’s mouth towards the fish, looking for a place to stab.

The probe rips through the fish’s flesh -— injecting the snail’s paralyzing venom — then slowly pulls the fish towards its demise and, without struggle, is eaten alive by the snail. Lunch is served.

Cone snails are much more dangerous than the average garden snail, for they have the ability to kill a human with just one sting.

Fortunately, there are other cone snails that have less deadly venom and are too intimidated by us to attack. The more easily intimidated cone snails are the topic of research for biochemistry professor Frank Mari and his students, who study the venom of the cone snail and its medicinal purposes.

“[These snails] muck around with molecules of nature to help get its next meal,” Mari said. He happens to use it to his advantage in the lab. According to his research, it can eliminate nicotine addictions and even be a “natural chemotherapy” for some types of cancers.

Venom may seem like the worst ingredient for medicine, but Mari says the ancient Chinese did it and they weren’t wrong. Mari has been working with the venom of these cone snails for about 15 years. Curing smoking addictions, hindering cancer, and tightening skin for only a few payments of $29.95 are only a few examples of the venom’s potential that Mari sees. When asked what would be the holy grail of his work he said, “Some kind of medicine taken orally and helps a lot of people.” He added that he loves working in the lab. “I come to the lab everyday and we discover something interesting.”

Mari explains that the significance of the cone snail’s venom in particular is that it is made of small molecules, making them easier to handle and recreate in the lab. Most importantly, it blocks specific channels in our brains, hindering our brain chemistry. Other kinds of venom are made of large molecules that can cause our immune system to attack a medicine making use of this venom, rendering it useless.

In Mari’s lab, the effects of the different puzzle pieces of venom are tested on flies because their nicotine receptors are similar to humans. Most of the research is using this receptor.

The nicotine receptor is the channel where nicotine affects our brain. Mari explains that one part of the venom, when used on flies, makes them unresponsive to nicotine, meaning if the fly had a smoking addiction, it didn’t anymore.

When the compound from the venom is put into the fly, it blocks dopamine from being absorbed when nicotine is injected. Dopamine, a chemical in our brain that causes pleasure and the want to repeat an activity, is what makes nicotine addictive and is the reason it is so hard for smokers to quit. Mari explains that this isn’t the goal. Blocking the nicotine receptor would not be ideal because it’s used for other reasons in the body. The goal, he says, is to hinder the response of dopamine to nicotine, effectively making the venom a cure for addiction.

The cone snail venom could also be used as a possible treatment for cancer. Mari says that certain types of cancer take advantage of the nicotine receptor and use it to recruit cells for destructive causes. Because the venom can suppress this nicotine receptor, it could be used as a “natural chemotherapy,” Mari said.

Each snail has a different kind of venom and it changes every time their diet does, according to Mari. Since there are more than 750 species of cone snails and more than 6,000 components in each venom, there may be over a million different components making up these variations. Mari explained that he is “doing venom mining” by searching for different types of venoms with different outcomes and that there is a treasure trove of possibilities with it.

Cone snails were not thought of as having medicinal purposes before research done by biology professor Baldomero Olivera from the University of Utah. According to Mari, people have known that cone snails are capable of killing humans since the 1930s. In the early 1970s, Olivera started researching their medicinal possibilities. He eventually published the first paper on the topic, which led to the creation of an FDA-approved painkiller using cone snail venom. The painkiller is non-addictive and is as powerful as morphine. Unfortunately, it costs thousands of dollars and can only be injected through the spine.

Mari and his students travel across the world finding and collecting these snails. They scuba dive deep into the waters or use a submersible craft, mostly concentrating on areas in the Caribbean but according to Mari, some can be found on the beach surface of the west coast of Florida.

Many of the cone snail species are deadly. So deadly, in fact, that in Hawaii Five-O’s episode, “Cloth of Gold” the killer used a cone snail as a weapon. Mari avoids these types. The timid snails are the ideal types for Mari’s research because their shyness makes them easier to handle.

The undergraduates working with Mari separate the venom into different parts, each being tested for its effect, while the graduates explore the reasons for these effects.

Mari has a “high appreciation” for the undergraduate and graduate students that assist him. They are a vital part of his research, and there are about a dozen working with him now. More than a hundred have worked with him over the years.

Alena Rodriguez, a biomedicine masters student, has been working under Mari for three years. She describes her job to her friends by saying, “I study the venom of cone snails,” and she says the next question is usually, “Snails have venom?” and then, “What’s a cone snail?”

Rodriguez explains using the popular children’s television show “Spongebob Squarepants.” Gary is a sea snail like the cone snails, so if you have seen “Spongebob” then you have seen a snail that’s similar.