Opinion: If I Ruled FAU Athletics this is what I would do

How a few suggestions could change the culture of FAU athletics 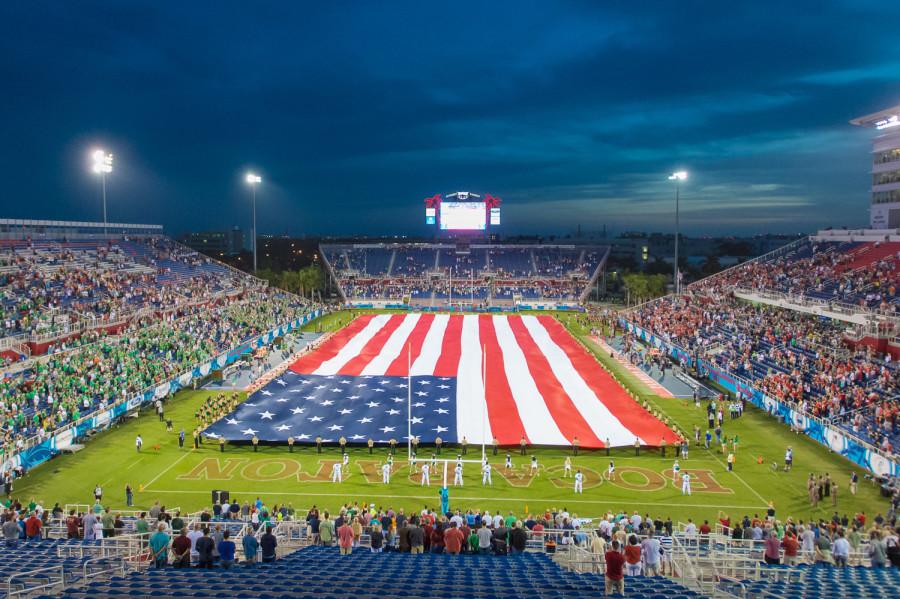 A 100-yard long American flag is held out during the singing of the National Anthem prior to the first-ever kick off of the Boca Raton Bowl. Max Jackson | Photo Editor

sk any sports fan about their favorite team and what they believe should be changed to gain more success. You’ll probably get an aggressive tirade on why coach Joey bag o’ donuts should be fired, how the team’s salary cap is too big, or the benefits of having a scoreboard that shoots fire (if that doesn’t put asses in the seats, I have no idea what will). The more I listen to a fan’s tirade, the more I put myself in that fan’s shoes.

Being an FAU student for one semester exposed me to many different parts of our athletic programs, bad and good. I’ve been up to my neck in FAU Athletics both as a reporter and occasional spectator, and if given the opportunity to make changes, I would.

I’m no expert at recruiting. I don’t have the extensive time to budget, or the attention span to listen to an NCAA representative ramble on about violations and rules at a meeting. I do have two eyes and a mouth to express my displeasure. So, as a power-hungry teenager with opinions, here are three changes I would make as FAU’s athletic director:

I would not have made FAU Stadium’s capacity as large as it is. Looking at the stadium, it’s quite the beautiful building. Built in 2011, the stadium still feels new, with a sea of blue seats seeming endless right before the field. With an official capacity of 30,000, many outsiders might expect the stadium to fill up on game day. But Saturday rolls around, and that sea of blue seats is still there.  With an average attendance of around 14,000 fans last season (FAU ranked 124th out of 128 teams in attendance during the 2013 season), this $70 million stadium seems more wasteful than anything else. As athletic director I would have tried to steer for a smaller stadium to be built. Originally playing their home games at Lockhart Stadium, a 20,000-seat field in Fort Lauderdale, FAU could not fill the stadium even then. FAU saw big expansion in its future, but with a team that has gone 13-35 in the past four seasons, fans don’t have much reason to show up. Which leads me to my next point.

Build a tradition for fans. FAU’s athletic programs had varied success over their history, ranging from conference championship seasons to pitiful disasters on the field. In the stands, the fans haven’t had many traditions to stand by. The Student Alumni Association and their PrOWLers do ring the victory bell after football victories, we do have a fight song, and we do have some chants and cheers. But other than that, FAU Athletics does not try to create any lasting traditions. This lack of tradition is eminent, especially in a program still trying to make itself a winner in many of the sports it competes in. As AD I would try to help students create a tradition people would want to participate in. One example is at Auburn where people toilet paper trees at Toomer’s corner, an intersection in town. Students and fans celebrated wins there constantly since 1896 by throwing ticker tape over the wires there after games, but the TPing started in 1972 after Auburn running back Terry Henley commented that his team would “beat the No. 2 outta Alabama,” alluding to Alabama being the second-best team in the nation at the time. Tradition is not something to be forced, but If FAU could find something to unite fans and get people to be interested in athletics, the fans could create a lasting image for FAU.

Pay Student-Athletes. My biggest problem with the NCAA and FAU Athletics has been their inability to pay student athletes at least a small stipend until recently, when the NCAA cleared conferences and their members to begin paying stipends. While many student athletes have scholarships that pay for some or all of their tuition, many still need money for other outside expenses. With rigorous class and practice schedules, many athletes cannot get a job on top of the things they do. If you think it’s crazy to suggest student athletes get paid, consider this idea. As a student athlete, you often get media exposure over various platforms. For the rights of the NCAA men’s basketball tournament alone, CBS and Turner Broadcasting will pay a total of $10.8 billion over 14 years (the deal started in 2010), which comes out to $800 million per season for the NCAA. This is just for the end of the season tournament, which lasts about three weeks and has about 65 games from the preliminary games to the final. While the NCAA does disperse this money to its member institutions and conferences, it claims most of the money goes back to the athletes through programs and scholarships. But why not directly give athletes the money? Professional athletes are paid big money for the same exposure many college athletes get. It seems unfair to not give your workers some kind of compensation, especially if they are having their likenesses used in broadcasts and if they are the ones building the brand: helping sell tickets and apparel. Pat Chun, our current athletic director, is working to get athletes on scholarship a $4,500 cost of living adjustment added to the aid they already get. I think this is a reasonable amount, and it can be given to athletes in all sports.

These changes would not be too big in the scheme of current things (except maybe the stadium, that’s more of a hindsight move), but if implemented correctly they could improve the way the Athletic Department operates over time.

With any luck, FAU can find a point where students and alumni could have something to be proud of, an athletic program that is successful and creates positive memories for all involved.