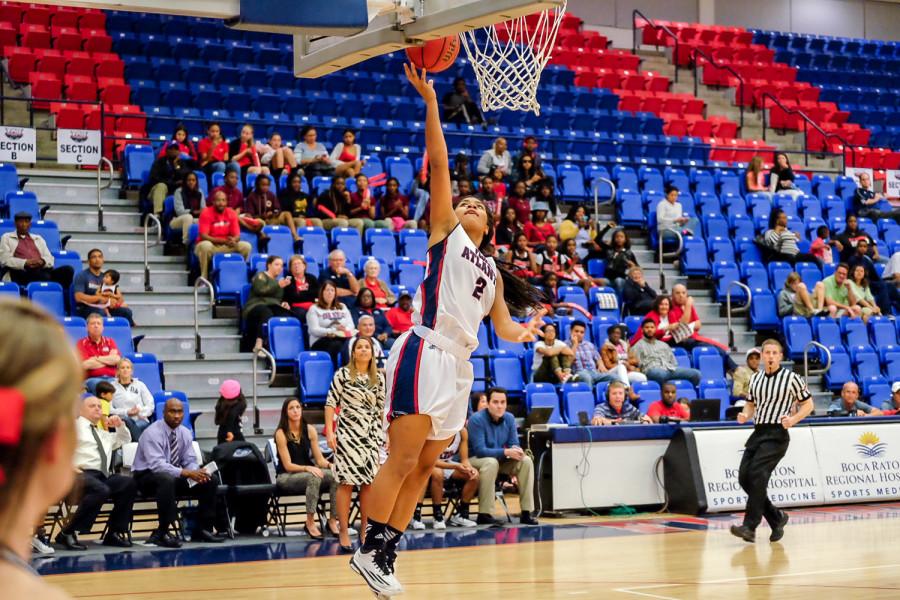 Sophomore guard Shaneese Bailey led FAU with 25 points in their win over FIU on Jan. 24. Photo by Mohammed F. Emran

FAU shot a blistering 57 percent from the field as a team in the first period. They also shot 3-of-7 from the 3-point line, making 42 percent of them.

Because of their strong play in the first half, they managed to lead by 21 points, 43-22.

In the second half, the Owls slowed down a bit going 1-of-9 for 11 percent and from the 3-point line and 14-of-32 for 43 percent from the field. The Owls dominated inside, scoring 50 points in the paint to FIU’s 18 points.

They also managed to capitalize off of turnovers, scoring 19 of their points off 13 FIU (3-14, 0-6 in Conference USA) turnovers. Their defense stymied the FAU offense and forced them to shoot 38 percent from the field and 28 percent from 3-point range for the game.

FAU only allowed one 3-pointer to be made in the second half.

The Owls’ bench was also a deciding factor, scoring 20 points in total. Junior guard Morgan Robinson led the way off the bench with 10 points.

FIU freshman guard Kiandre’a Pound tried to mount a comeback for the Panthers in the second half. She led the Panthers with 29 points.

The FAU defense made it hard on FIU’s shooters to get an open shot. Freshman guard Lauren Williams, sophomore guard Bailey, freshman forward Melinda Myers and freshman forward Sacha Cedeno each had a block.

The win snaps a three-game losing streak for FAU. The Owls have won both of their games this season against the Panthers, with FAU winning the last meeting by a score of 79-63.

The Owls’ next game will be against the University of North Carolina at Charlotte 49ers on Jan. 29.