Itamar Marcus spoke to an attentive crowd in the Grand Palm Room Monday night, drawing some applause and driving others to walk out in silent protest. 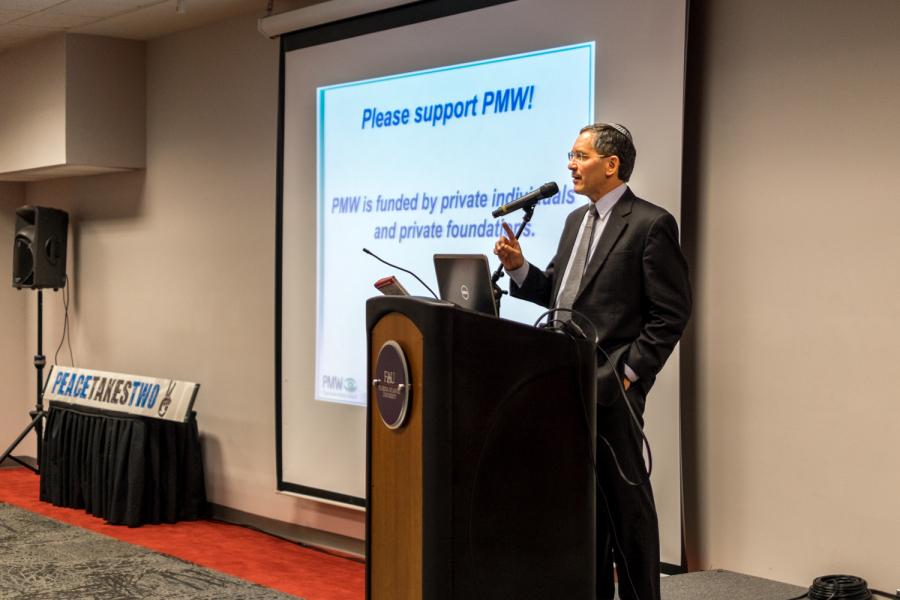 Monday night in the Grand Palm room, Itamar Marcus — founder of Palestinian Media Watch, an Israel-based nongovernmental organization — discussed his views on the Israeli-Palestinian conflict and how Israel is portrayed in the Palestinian media.

The lecture was sponsored by StandWithUs , a pro-Israel advocacy group, and student organizations such as Owls for Israel and Alpha Epsilon Pi, a Jewish fraternity. The event did not appear in the FAU Master Calendar, regardless, attendance was high.

“We have over 200 seats and most of them are filled,” said Melody DeSanto, a StandWithUs Emerson fellow.

The Grand Palm room was filled with a row of chairs facing the podium and near the back, complementary coffee was available with an israeli flag on display behind the dispensers, tables were decorated with blue napkins donning the Star of David and Israeli candy.

The audience, mostly made up of middle-aged and senior citizens, made its way across the student union, with staff members directing them to the Grand Palm Room.

Non-students sat in the first eight rows, with the exception of an estimated 12 members of Students for Justice in Palestine and Dream Defenders, student-run social justice groups, sitting in the third and fourth rows. Members of Alpha Epsilon Pi and Owls for Israel occupied the last rows.

“I wouldn’t go somewhere where I didn’t like the speaker, unless it was Obama,” said an audience member while mingling with the crowd, but not all shared that viewpoint.

At around 7:40, the lights dimmed and a video played, stating the objectives of StandWithUs, which include “informing the public about Israel and combating the extremism and anti-Semitism that often distorts the issues.”

A member of SJP placed her hands over her ears as the narrator began discussing Palestine and the views of StandWithUs on Palestinian education. After the video, DeSanto introduced keynote speaker Marcus, who was greeted with applause.

Marcus began his lecture with a history of how Palestinian Media Watch was founded. The lecture touched on a myriad of subjects regarding Israeli-Palestinian relationships. Marcus discussed how suicide bombers tend to be glorified in Palestinian culture and how children’s shows encourage anti-semitism.

He also touched on the problems of extremism and how both sides of the conflict could benefit if they engaged in mutual discourse. Marcus showed a powerpoint of what he said was “Palestinian propaganda” depicting a caricature of an Israeli soldier with his pants down threatening to rape a palestinian prisoner.

At this moment, members of SJP and Dream Defenders, some 20 total students, quietly stood up and walked out of the lecture, senior citizens and non-students in attendance began clapping.

Mordecai told the UP he was glad they left. “I felt maybe the speaker would feel slightly intimidated,” adding that SJP members came off as intimidating.

“At that moment it was absolutely barbaric, it showed this political cartoon totally out of context, totally depicting Palestinians as barbarians,” said SJP’s vice president Jihad Sheikha on his rationale for walking out.

Marcus continued the lecture by discussing Palestinian media and his work on school textbooks. When asked about the walkout, Marcus said “I was a little disappointed that the Muslim group left. I’d love to encounter with them and hope that they understand that this is actually peace promotion.”