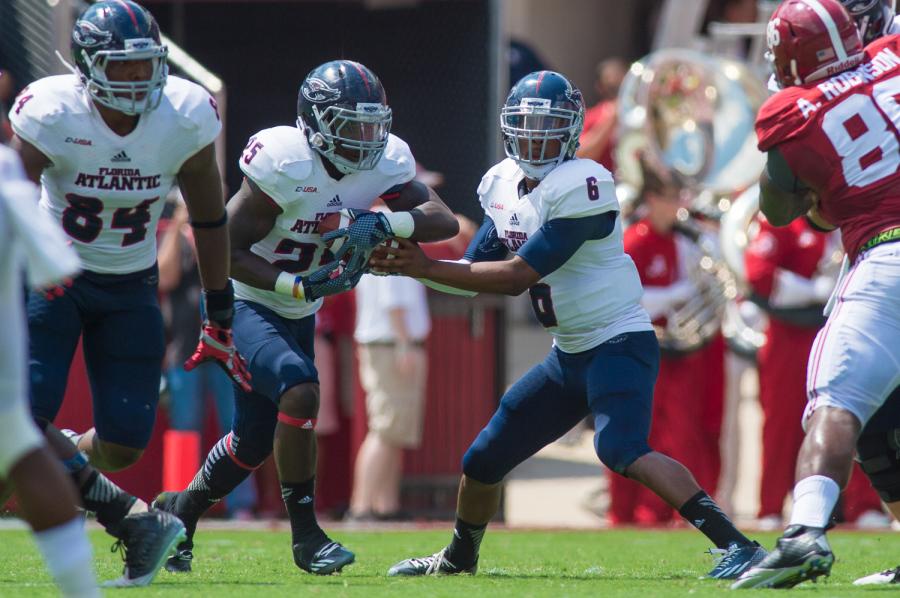 Running back Jay Warren, pictured here in a game versus Alabama, led the team with 95 yards in a 35-34 loss to Middle Tennessee State on Nov. 22. Photo by Max Jackson

The Florida Atlantic Owls (3-8, 2-5 in Conference USA) got off to a fast start against the Middle Tennessee State Blue Raiders (6-5, 5-2 in Conference USA), but it was not enough to help the Owls gain their first road win of the year.

Senior wide receiver Lucky Whitehead ran for a Conference USA record 80-yard touchdown run on the opening play to put the Owls up early. Whitehead had 125 yards from scrimmage on the day.

The Owls went for a gutsy fake punt on fourth down during the third quarter but did not convert. The Blue Raiders scored on the very next drive to cut the FAU lead to six, 27-21.

FAU led 17-14 at the half, and led for a total of 59 minutes and 37 seconds. However, the Owls suffered their eighth loss of the year thanks to MTSU sophomore quarterback Austin Grammer’s 12-yard pass to senior wide receiver Marcus Henry with 19 seconds left in the fourth quarter.

After an extra point, MTSU led 35-34 their first lead of the game. FAU failed to score on their final drive of the game, and left Murfreesboro with a loss.

Junior quarterback Jaquez Johnson had 304 yards of passing on the day and two touchdowns, but he also threw two interceptions — both off of hail mary passes to end the half and the game, respectively.

“The thing I’m proud of is the way we scored to go up in the fourth quarter. I’m proud of ‘quez (Jaquez Johnson). His two picks were hailmarys, so I’m proud of the fact that he threw for over three hundred yards,” said FAU head coach Charlie Partridge.

FAU is 1-8 against the Blue Raiders with Rick Stockstill as their coach.The Blue Raiders needed this win to have a guaranteed bowl game after the season. Up next for FAU is a home game against the Old Dominion Monarchs on Nov. 29.